a bit off-topic, I guess, but the news for the FPs aim to port other OSes to the FP (the lastest blogpost) has reached the Ubuntu community as well.

I just read in an article in Heise online that Fairphone Company is working on an Ubuntu-OS Portation for FP2 and has still not given up hopes on making this also available for FP1 users.

Is this correct? Who has more infos on that?

As I´m fed up with some Android features I already started looking for alternative OS-smartphones from Meizo (=Ubuntu) or Blackberry. But if something is still going on with FP1 that would be a well needed argument to stay with this.

You were moved fast. I don’t have much hope for the FP1. The FP1 based on MTK and there is no public code for that, so I assume nobody will be able to port the code. And it’s a bit too old and too slow.

Update: This answer is for the FP2 only!

For the FP2 try the links below and searching the forum! Make sure you check the “What’s working” part.

The page you linked to is about FP2. @GT-Eins, however, asked about FP1 (that’s why I moved the post here).

@keesj has the keynote at the Linuxwochen Wien next week. Maybe Ubuntu Touch will also be a topic.

So I understand:
FP2 is possible
FP1 maybe - just in case of a (proposed) Android update

The page you linked to is about FP2. @GT-Eins, however, asked about FP1 (that’s why I moved the post here).
@keesj has the keynote at the Linuxwochen Wien next week. Maybe Ubuntu Touch will also be a topic.

My bad. I tried to fix it. I hope they will be able to record his talk this time

FP1 maybe - just in case of a (proposed) Android update

Yes, but I wouldn’t wait for the FP1. The FP2 is a better candidate. But according to an old blog post and a talk by @keesj they have the MTK ‘base’ source code. So things are possible but no one knows. But they are very busy so not sure if they have time for things like the FP1 or Ubuntu OS.

I just read in an article in Heise online that Fairphone Company is working on an Ubuntu-OS Portation for FP2 and has still not given up hopes on making this also available for FP1 users.

Could you post the link to that article? Or give a quote to that particular paragraph?

I just read in an article in Heise online

Do you have a link?

has still not given up hopes on making this also available for FP1 users.

I doubt that Ubuntu Touch is ever coming to FP1. This is the first time I hear anyone claim that. Of course, it would be nice, but I don’t see it happen.

This is the first time I hear anyone claim that.

There is indeed this heise online article (I’m not sure, if it is the one, @GT-Eins is referring to) from February 2016, which states the following:

English translation: Even with the first Fairphone the company hasn’t given up hope yet to provide a newer Android and alternative OSes and is still working on a solution.

I still think that there is a theoretical possibility that there can be a Ubuntu Touch port for the FP1 because we have already experienced two community ports on an Android Kitkat codebase (CM11 and Kitkat 4.4.4 by @chrmhoffmann) and I can’t imagine why a company, which could pay a developer full time for porting an OS and has obtained the software licenses to be legally able to, couldn’t come up with alternative OSes.

Yes this was the article.

I plan to talk about current alternatives and their status. Ubuntu Touch is not quite there yet and more involvement from the community is needed. The porting projects are happening in the open in the respective communities. We provide support by means of the https://code.fairphone.com website on and on the freenode irc network.

some impressions of the Linuxwochen in Vienna, where @keesj had a keynote: 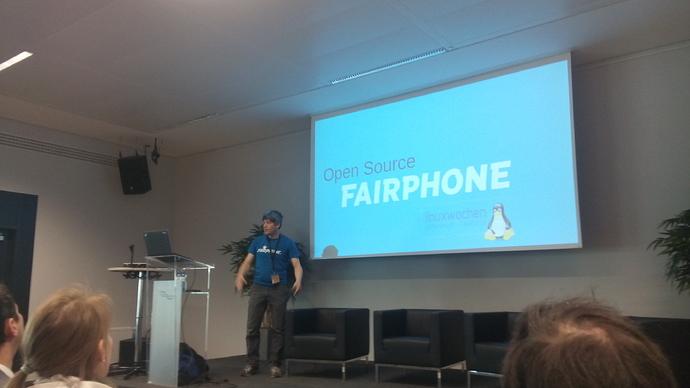 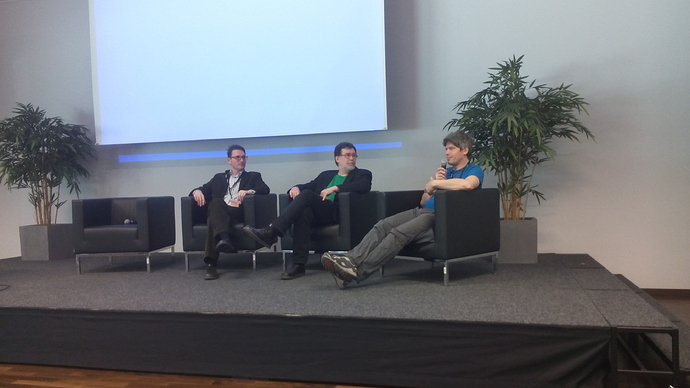 About Ubuntu:
As far as I remember Ubuntu is one of the OS, which is at a early implementation stage. It boots but there is still a lot of work to do. Ubuntu experts are welcome to contribute their know-how

Hello, I am not an OS specialist; just a basic smartphone user. As many of you, I have been waiting for the upgrade from Android 4.2 to Android 4.4. After having read the entire discussion about that issue, I am convinced that an upgrade to Android 4.4 won’t make the FP1(U) last much more than one or two years from now. Can anyone tell me if a complete switch to Ubuntu is possible with the FP1U and would make it a true, longlasting , sustainable device? Would I encounter the same ugrade limits in the open source universe? Can anyone please tell me how to proceed or where I could find the usermanual? Is there already a forum with this topic which I did not come through? Many thanks

Okay, this hasn’t been discussed here on the forum for a long time, thank you for bringing it up again!

After having read the above discussion again, it seems that Android 4.4 is actually a prerequisite for Ubuntu Touch, and maybe they have even moved to a higher Android version as the foundation for UT. According to the porting guide, 4.4. is still needed.

This is a good reason why Fairphone MUST make the upgrade to 4.4 possible for the FP1(U)! I remember that at the time I ordered my FP1 U in late 2013 , Android 4. 2 was mentioned by Fairphone only as the default OS installed on the FP1, suggesting that it was ideally intended to be used with an open source OS. It is a bit hard to read 3 years later that Android 4.2 is probably the only OS on which the FP1 will ever run. My wife uses an iphone 4 since 2010 - over 6 years! - whereas I should accept that my so called sustainable fairphone will be good for trash for less than that? If some hardware components cause this predictable obsolescence, why wouldn’t it be possible to replace it and give the FP1 a second life? For sure, this would not be a profitable operation, economically speaking, but this would be a fantastic sign of recognition for the early supporters who made the Fairphone dream become reality. Resentment and disappointment that rise amongst early supporters on the FP1 forum appear to me as bad signs for Fairphones’ future. It is really sad…

To stay on topic: Likewise I haven’t heard about Ubuntu Touch running on the iPhone 4.

Does that mean that an upgrade to Ubuntu Touch is only possible once the new OS Android 4.4. is released for FP1?

Yes, theoretically that does mean that Android 4.4 is needed. Since Fairphone is not allowed to make the sources public, in praxis there won’t ever be a non-Android OS.