Mozilla released an Firefox OS Android Launcher for people to get a glimpse at Firefox OS on their Android phones. 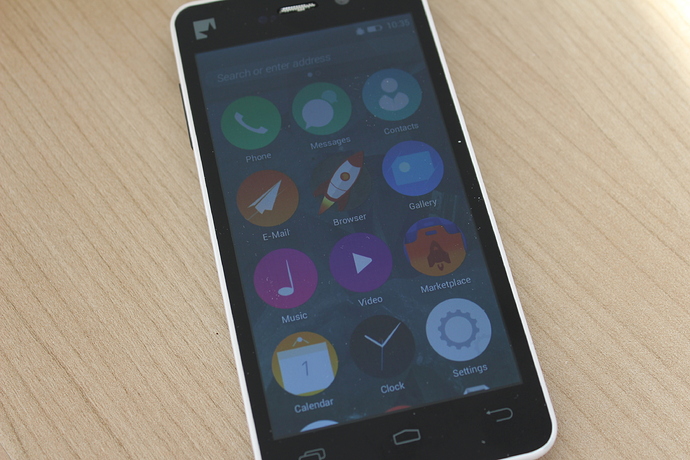 So be aware that it is experimental and you probably hit some limitations. However it is easy to install (once you have enabled third party apps) and it runs. Once installed, hit the home button and you will be presented with a choice of launchers. Most people will see Fairphone OS launcher and Firefox OS launcher. Select Firefox OS and confirm that you want it to to be used “always”. You can change this later by uninstalling Firefox OS launcher or in the App overview settings.

I have installed it and it looks very different from Android. Even the notification bar is changed. However you can still access all installed apps (even the Android apps you have installed).

The first time I opened the launcher, it took a while to load. This seems to happen again from time to time.

What I especially like is the rubber band effect when scrolling to the end of a list or to the last screen of the launcher: When pulling further, the entire screen gets stretched like a rubber band

Some more information and pictures

Having it tried for a little bit I have to say it is hardly usable. My Android is already very slow without this new launcher (maybe because I have my phone encrypted?). But with the Firefox OS layer on top it is even slower: Especially reloading the home screen for several seconds each time I access it is very annoying.

I will remove it again for now. Let me know whether this is only my phone or if you also have the same issues.

I love it so far! I’ll post back with more details. The rubber-band effect is really cool.

The Firefox OS swipe gestures are available: That means you can swipe in from left or right to go the the previous/next app.

Same issue for me : slow and displaying the ‘foxfood’ and ‘forefox OS’ loading screen each time I start the launcher with the ‘home’ button.

Is your phone also encrypted? Or is there anything else that you think could cause this?

I love it so far!

Is it in a usuable speed for you? What might be different in your configuration that makes it work? Is your phone encrypted?

I have the exactly same issue, but I have tried it on an old Galaxy Nexus that is extremely slow by his own, so I had thought that it could be too old and weak for this laucher, but if the Fairphone have the same issue it’s a problem of the laucher. what a pity!

Is it in a usuable speed for you? What might be different in your configuration that makes it work? Is your phone encrypted?

Actually my delight was premature. After the first load it worked great and fast the first 5 minutes or so, then my phone froze and I had to remove the battery to restart. Now I can’t get past the Foxfood screen…

It seems to be an issue with the launcher in general. People comment on the Mozilla Blog with many issues as well.

This topic was automatically closed 125 days after the last reply. New replies are no longer allowed.