Touchscreen not working after disassembling

I have disassembled my Fairphone 1 today to substitute the power button (i.e. I have just opened it by unscrewing the first 5 screws and opened it with a pick, but did not go any further than that) and my touchscreen has now stopped working.

Afterwards I realised that the antenna cable connector 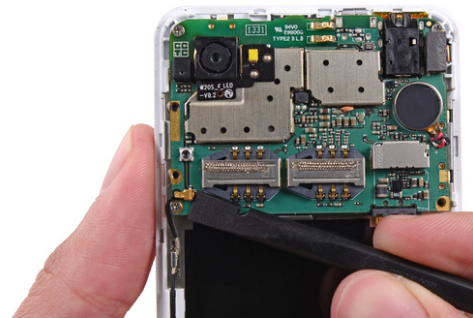 had been disconnected somehow, so I fixed that, but the touchscreen is still not working.

Any ideas of what I should do? I have already run a touchscreen test just in case.

Thank you so much!

Disassemble your phone again and reassemble. Perhaps something else isn’t connected just enough.

Thank you, I’ll give it a try. Would you recommend I disassemble it all, or just the same steps as before?

I have no idea which connection carries the touch functionality, but there are 3 connections between the screen and the main board:

Thank you! I had not realised that somehow the switch-connector under the black foam piece had been opened, so that was preventing the touch screen from working.

Yep, I can confirm that it’s the connection in the upper right corner (below the black piece of foam). I fell for that too once.