Too unpredictable to be a business phone

My problems on my FP2:

There are other small irritations but it is the unreliability and unpredictability of the phone and Android that make it so hard to use.

For the first issue there is an easy fix. If you long tap on the (I guess two, since you lost one screen) dots above the home button you can choose between apps and widgets. Since accidentally removing one app on a screen with many apps doesn’t remove the screen I guess you removed the “My Apps” widget. So tap on widgets swipe till you find the my apps widget, long tap it, “move” it to the right edge of the screen until a new screen appears and then release it.

Issues 2, 3 and 5 are probably resolved by removing the screen protection foil, which is only meant to prevent scratches during transportation and shoul be removed before first use.

If you continue to have a black screen during calling try the workaroubds from this thread:

Problem is that I can’t find the My Apps widget in the widget list. But thank you for your suggestion. I removed the protection foil, thanks (!!).

Any idea about the problem of saving edits to Contacts?

The widget list is in alphabetical order. I can’t think of any reason why it shouldn’t be there, or are you using an alternative launcher?
Anyway, a workaround could be to move the icons of your favourite apps to the homescreens. If you drag them to the right side, new homescreens will be generated.

Any idea about the problem of saving edits to Contacts?

To save the edit, you need to tap on the check mark in the upper left corner.
If you’ve done this already and the changes are not saved, then it might be due to where the contacts are stored…

The widget list is in alphabetical order. I can’t think of any reason why it shouldn’t be there, or are you using an alternative launcher?

It’s in alphabetical order but also sorted in active and inactive apps. If you can’t find some apps, try scrolling to the very bottom of the app drawer and have a loot at the inactive apps.

If you don’t like the launcher that comes preinstalled on Fairphone, you might want to try a different one. Have a look in this list of suggestions by fellow Fairphone users:

This is a Wiki Post. Everybody can edit it to add information. Hello, inspired by this Topic I thought a Topic where different launchers can be introduced to other users could be interesting. A Launcher is the program, that shows your homescreens, allows you to organize your Apps and gives you the possibility to place your widgets. Because this App can be changed like every other App on Android, you can simply change the look and feel of your phone by changing the launcher. Because ever…

sorted in active and inactive apps

Apps yes, widgets no. Widgets are always in alphabetical order.

A reply to the thread title. I strongly have to disagree. I use it since December as business phone, and it works very well (actually much better than my Nokia work phone, which now rests in a drawer, thanks to dual sim support of the FP2).

or are you using an alternative launcher?

Even with alternative launchers the widget should be there unless one disables the standard launcher maybe.

I am not sure what a “launcher” is and why there would be alternatives. I haven’t changed the launcher and My Apps is simply not there. Could it have been deleted?

It’s no very probable, but maybe the name of your widget was translated. Have a look at my screenshot and look for a similar picture in your list. 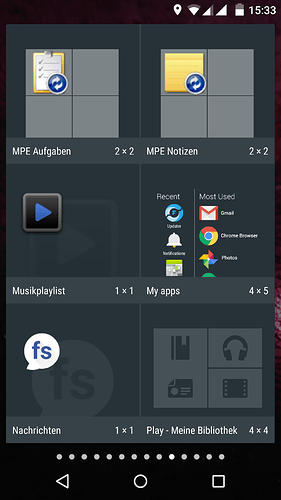 On the business phone topic, I have had a series of smartphones: Samsung Galaxies and iPhones. I am pretty good at configuring and using both iOS and Android but, on the Fairphone, I can’t work out where the Fairphone OS starts and Android ends. I am having trouble managing my Contacts and the screen blackout during a call is a huge negative.

Back on my iPhone until I can sort out my FP2.

I can’t work out where the Fairphone OS starts and Android ends.

Spontaneously the only difference that comes to my mind is the edge swipe, plus that it ships with the “my apps” widget and the privacy impact app (I think they’re all part of the Fairphone launcher). I think besides that it’s pretty much plain Android.

When I edit Contacts, the changes revert back to the original.

I am clear how Contacts work on my iPhone, for instance. I am simply not sure how the FP2 Contacts app interfaces with Google Contacts, my home repository in the cloud.

If you use the default/pre-installed contacts app, then it is Google’s contacts app.
You will find additional settings in
All apps - settings - accounts, in your Google account. I think google also allows many settings and configurations in its online dashboard of the Google account, but I’m not familiar with that as i don’t use Google.

Thanks, everyone. Finally found My Apps. At end and not in alphabetical order. Still having problems in keeping the screen “on” when making calls and unable to end short calls without taking the battery out. That must be wrong, surely?

Yes, that seems to be a bug affecting some phones.
Hopefully an update will fix that soon, in the meantime there are some workarounds to temporarily fix it. See here:

Hi, I had the same problem with my screen “off” today and several times before. Today, I tried out the “remove screen” tutorial https://fairphone.zendesk.com/hc/en-us# https://youtu.be/hsop-mM1MZk and I found out that my screen was not inserted 100% before. That means, there was a very little overlap of less than 1 mm between the top of the screen and the top of the rest of the fairphone. I assume that this was not only the reason for several “black screens” and restarts etc., but also for a very thight cover. Since I “replaced” the screen (I took it off and placed the same screen again), the screen is on ant the cover was easier to place (less tight) and I hope that some more troubles disappear.
I can only agree that I had many of your issues, too, and I was also in doubt wether this is usable for business purpose. But with some efforts (some hours), I found all those solutions mentionnend above, I lost my homescreen and my apps and it took me a while until I found it, my screen was full of scratches until I removed the protection film and my screen was black as mentionned. I went through the same troubles as you did and afterwards, I think it was all easy to solve. So this is to say that I do believe in FP2 and in FP2 as business phone!

I can’t find that save check buttton

but thanks, Marie, for the solidarity!

I have reverted back to my iPhone 5S until I solve some of these remaining problems.