The life of a battery FP Li ion

There’s little direct info on the Fairphone battery but generally the battery would typically last 2 or three years.

This means than on average if your battery is well over a year old it will discharge, in terms of percentage charge at a faster rate.

There are different make-ups of Li -ion which have longer life LiFePo are renowned.

One problem with Li-ion is that if they are discharged to zero and charged to 100% the life is shortened.

The Fairphone battery Charges up to 4.4V, on my phone, which adds stress to the battery although it does not get hot.

Here are a couple of links to help understand the issues.

The Lifespan Of Lithium-Ion Battery

The typical lifespan of lithium-ion battery is around 2-3 years or 300-500 charge cycles – whichever happens first. One charge cycle is calculated as the period of use from fully charged to discharged and fully recharged once again.

If the battery doesn’t run the complete charge cycle, you should rely on the 2-3 year lifespan of the battery. 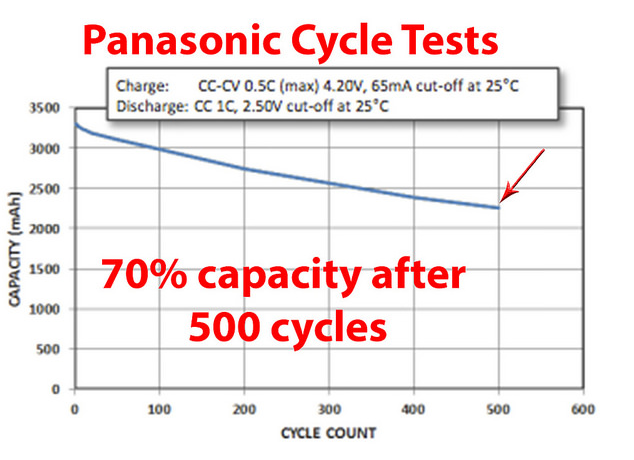 How many lifecycles does the lithium-ion battery have? August 13, 2018 by Cherry Yi In the battery industry, Li(NiCoMn)O2, having multiple advantages of the rapid occupation of the market, is gradually replacing the conventional lead-acid...

The theoretical life of a Li(NiCoMn)O2 is approximately 800 cycles, which is medium in the commercial rechargeable lithium batteries. Currently, the cell manufacturers promise more than 500 times in the Li(NiCoMn)O2 specifications produced by them (charge and discharge under standard conditions). Nevertheless, following the assembly of the batteries into the battery packs, owing to the consistency issues, voltage and internal resistance primarily cannot be exactly same, and its cycle life is approximately 400 times. The battery pack manufacturer recommends the SOC as 10%~90%. It is not recommended to carry out deep charge and discharge. Or else, it is expected to cause irreversible damage to the positive and negative structures of the battery."

For what it’s worth, I’ve just replaced the original battery on my FP2 a month ago, which gives it pretty much 5 years of day-in, day-out use. For most of that time, I was charging it to 100% from around 5%, so fairly hard wear. I would usually charge it from a USB battery, and often leave it overnight - I’m not actually sure if the batteries would switch off automatically at 100% if the power draw dropped though.

More recently I installed Accubattery, and started doing more of a 5%-90% charge cycle.

Before I swapped the old battery out, it was giving me between 24 and (max) 40 hours of use, as can be seen here, depending on apps installed and usage, of course. (Stock FP Android 7. I tend to try to keep things light, don’t play games, use Battery Saver mode and prevent network connections when I’m not using it.)

The new battery has increased that a bit - I now go about 48 hours on average, with pretty much the same setup. I’ve also just switched to Android 9, so it’s a bit too early to say if that will help much.

Not sure how helpful that is, but wanted to log my own experience anyway.

@scribe Yes thanks I find your info interesting and useful.

If you have the option of service tests, would you mind doing one for the battery. On Android 10 it can be done via dialling *#*#66#*#* > Service Tests > Test single > Battery I am interested in what voltage it is being charged at, especially when just about fully charged.

Thanks for your input.

OK Belay the above request: See following post from @urs_lesse

These Service Tests are not available on the FP2. It comes with “Checkup” (in Settings > Maintenance), but that doesn’t include a battery test.

I have a USB power meter - would it be useful to use that during charging and reporting results back?

It could well be useful ?? but I don’t have one to compare results like for like with my FP3