System UI crashes when headphone playback turned up beyond 5

When I’m playing media using headphones and turn the volume up beyond 5, a notification comes up saying that the System UI has crashed. Often this will also reset my wallpaper image!

What exactly does it say in Settings - About phone - Build number?

If I tap it it says “No need, you are already a developer”

Please tell us which app you are using for playback. Are you using wired or wireless headphones?

Is this number aligned to the app or where from does this come?

I assume your are using Marshmallow?

AFAIK these are all kind of streaming media players. I don´t have a specific idea what´s the cause. So I tend to advise going by trial and error. Try another pair of headphones, preferable bluetooth if available. Reset each cache of the mentioned apps…

Maybe also check on the overall system volume settings in correspondence to the volume settings of these apps.
Some apps (like I use MXPlayer) allows you to synchronize its volume with the overall system volume or keep it independent which lets you to boost it further until distortion. Maybe there is a cause.
Also you can specifically clear the cache of the “System UI” in settings->apps->swipe to “All”->System UI (Lollipop). Reboot the phone.

The system UI is a general system component for input and control. Also have a try without any specific wallpaper.

I hope there is a hit with these options.

I have the same problem! I dont think it has to do something with the apps. Even when i close all my apps, open the settings, and raise the media volume: the same window telling me that the system ui stopped, appears (only when i have any jack-cable or headphones plugged in!).

I can not find what you are talking about here:

Also you can specifically clear the cache of the “System UI” in settings->apps->swipe to “All”->System UI (Lollipop). Reboot the phone.

For Lollipop it looks this way: 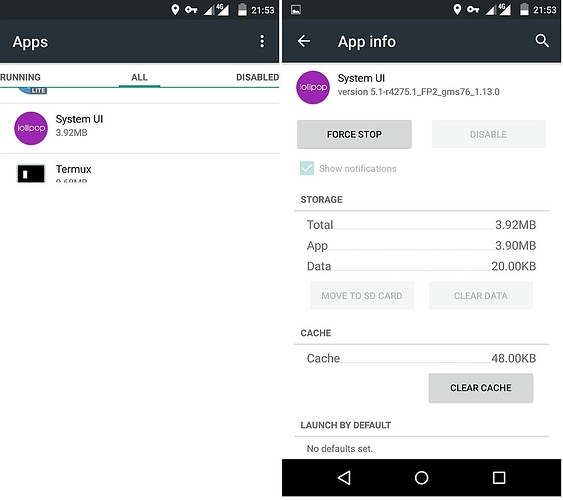 I could not reproduce it with Lollipop, it maybe only occur with some Marshmallow constellations.

Thank you so far! When i hit ‘clear cache’ it dies not really react… It sais there are 12kb. Any ideas?

That´s all to be seen. After rebooting you may again try if the “system ui” still acts the same. If so the cause is sometwhere else and more tricky to find.