Hi, just wanted to ask the community if somebody else had heir case/cover easilty stained. It’s a minor issue but an annoying one. Official FP support didn’t acknowledge this design flaw.

I received the new phone this week and after just once carrying it in the back pocket of my (old but well washed) black jeans, the case got stains. To me this seems an engineering issue and not a production flaw.

Any similar experiences? It can be cleaned manually but with a little effort – which I’m not prepared to undertake every time I keep it in the jean … 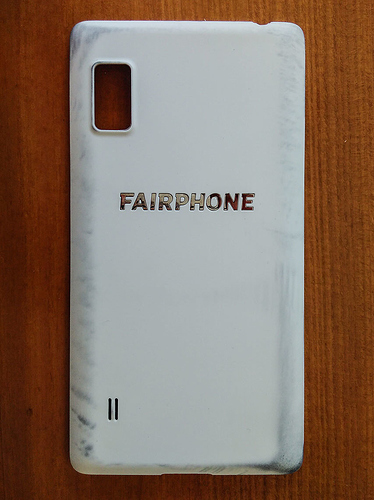 Well it’s a flaw of the jeans if at all.
White things stain easily - that’s no news.

The good thing: You can take the backside of the cover off and wash it under the sink. It will look good as new in no time. Just make sure it’s really dry before you put it back.

Now, please read the issue properly before you reply, thanks.

Which part do you think I over/mis-read?

I could imagine that the inside of the pockets don’t get washed as well as the outside, resulting in dye that still comes off after various wash cycles.

Is it some kind of eco-certified jeans or a “normal industrial” one?

Which part do you think I over/mis-read?

The part that @mdeleisi already found out that the case can be washed, but he/she doesn’t want to do this every time.

I think we need more cases of jeans-adhesive fairphone backcovers to evaluate this.
Since I have not read a single post about such an issue until now, I am with @paulakreuzer and would strongly assume a design or manufacturing issue of the jeans trousers. I would be curious about how this very backcover does behave in another pair of jeans, preferably of a different brand and color.

Additionally I would strongly recommend against carrying a smartphone in the back pocket of a jeans for obvious reasons.

Does not look nice, but I did expect this reaction by “general” use.

Hence to this I stuck with the classical FP blue/black cover.

Anyway, FP clearly stated somewhere back in time, maybe on their HP they would resign on the surface finish (sealing/resistence against scratches) on their covers as this process would require using strong chemicals which again would be polluting. I guess this view is also one side effect.

The problem is not the jeans but the unprotected plastic as Patrick1 states further down.

@Patrick1: That’s interesting and I’m all in favour of reducing strong chemicals in products. And as the cover is made from recycled pastic, Fairphone did a good job. However, I assume there are plastics you can recycle that are not so porous as to stain so easily.

The problem is not the jeans but the unprotected plastic as Patrick1 states further down.

You can’t just blame the cover material as you are clearly the first one who experience this this dramatically. I have put my white covered FP2 in many jeans yet - old, new, dark, light - and didn’t find any jeans-stain on my cover yet. In fact I wouldn’t say that the cover stains any easier than anything else that’s white.

The slim cases now are “scratch resistant” as stated on “https://shop.fairphone.com/en/fairphone-2-slim-case-indigo”.

But they weren´t back in 2015 as I ordered my phone due to environmental friendliness. Also I can clearly see how my cover looks meanwhile on the back.

The slim cases now are “scratch resistant” as stated on “https://shop.fairphone.com/en/fairphone-2-slim-case-indigo”.

Not me actually. My original cover is still fully functional although I do remove it sometimes for switching the empty accumulator it has no cracks by now.
The black frame is slightly bend where the buttons are, but no damage so far.
Scratches don´t bother me. The phone is for usage not for glamour. Anyway I´m caring as I want it to last as long as possible. It passed the first year already.

But you can see either FP gave up on the cover finish avoiding strong chemicals or maybe found a more compliant solution or stronger material.

I do like the new slim covers look, but also can read in this forum about issues with tight fitting and button problems.
Unless mine isn´t broken I won´t need any.

I am actually confused that only the white cover gets stained so easily. Of course white is a bright colour on which you see those stains more easily. But I have the coral red one for a month now and did not encounter any problems, even though stains as strong as om these pictures here should be visible on the red and turquoise covers too (I read that these strong stains are not the norm, but still).
In general I would be curious to hear about people’s experiences with the coloured covers and stains - I didn’t have any so far. Neither from my pants, nor my bag (which normally easily stains my stuff)

I am actually confused that only the white cover gets stained so easily.

So far we know of one white cover that stains easily from one pair of jeans.

I have a turquoise cover since a couple of months and I have never had any stain issue.

I received my coral red slim case yesterday, took it out of my jeans pocket this morning and I immediately noticed the first stains.
I’ll switch to another pair of jeans tomorrow.

4 posts were split to a new topic: Dye a white FP2 cover