Recently discovered the possibility to take spherical pictures. Since there is no viewer for then here, some links. All taken with FP2:

Some more, all taken with FP2 using the phones software:
http://casacota.dynalias.com/perl?board=esferiques

Very interesting! Would you care to describe how you make them, and which software you’re using?

Oh, yes! With the FP2 camera app, nothing else!
If you slide right with the camera app open on the image, you see Photo Sphere. You have only to follow the blue dot. 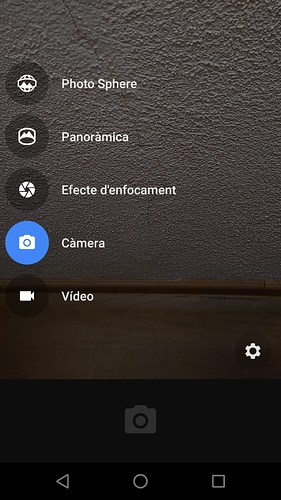 I see. I’m on LOS, so I have to start looking

What viewer do you use on that web site?

The viewer is almost pure JavaScript and can be found at https://pannellum.org/

thank you for the pictures and the hint, that spherical pictures are possible. In my camera app, there isn’t the discribed function … mine is version 2.0.00.2. Which version do you use?

best wishes for a wonderfull year

I don’t know how to find de version from the camera app. This funciton appeared after updating the phone to Android 7.1.2. The phone has Main camera 12 MP - OmniVision OV12870. As I read on Internet, this feature is Google specific, so if you have another Android version as the regular one it is possible that there is no such function. The FP2 is a 2018 model, manufactured in August.

Hello
This is not new. I remember this function was already available when the first FP2s came out in 2016.
It is provided by the original google photo app, which they modestly named ‘Photos’. You need to run this Photos app, unless if you’re using open-OS where its not available.

Dear casacota and dear jaymanu, thank your for the answers! My version of the camera app doesn’t supply spherical pictures and it would be great if you can tell me, which version you use. You can find it out, when you hold the app and pull it to the top right edger where “Details” stands.
Thank you!

Thank you very much! I found the apk and it works!!