Hi all,
after successfully upgrading my FP2 to Android 6.0.1 everything seems to be o.k. (and some even better as with 5.1

) except the app “Soundrekorder” (german title). As already mentioned in this (closed) thread, there are no settings available for file type, storage folder etc… The app shows a text “Press: 0-Mic 1-Rx 2-Tx-Rx …” which might refer to keyboard input, but the keyboard can’t be activated. In addition to the mentioned failures, the app stores records as .amr-files in the root folder of the phone instead of the provided folder “SoundRecorder”.

Who can add this to the bug tracker because I cannot find a way to do that?

I also have this problem. In fact I couldn’t even find the recordings until I read the post above. (Thanks for that!)

This weekend, I also updated my Fairphone 2 to Android 6 and I found exactly the same issue.

Fortunately I have a Bluetooth keyboard and mouse so I can select these menu items by pressing the appropriate digit key. For example 1 and 2 allow record a regular phone speech (they work only when the phone connection is already established. i.e. there is no event triggered catch mode), 3+ allow select a file format (the record button is then highlighted orange).

Because most users don’t have such a keyboard for their smartphones, it looks like a piece of forgotten source code when building the binary package for distribution via the Fairphone updater app. 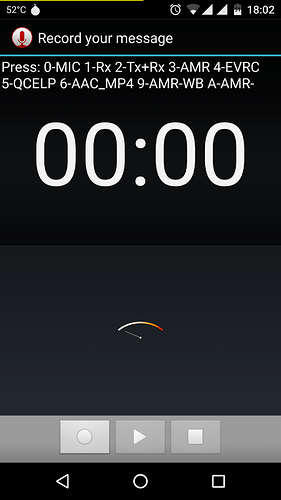 I have the same problem. Maybe a stupid question… but where (or how) do I retrieve files from the root folder?

Me too - really annoying as I use this function for my job. Did anyone find a way to solve these problems (not storing and no options)?

The only solution is for Fairphone to fix it. It has been on the official bug tracker for three months. FP has accepted it as bug and stated that they are “looking into it” more than two months ago. They just don’t seem to care.

I’m interested in this bug being resolved. I have reviewed the issue’s status at bugtracker (https://bugtracker.fairphone.com/project/fairphone-fairphone-os-android-6/issue/35) and there’s no activity since June. It’s a pity I haver to download a different app when the original one worked fine for me…

Me too. New FP2 and went to use the sound recorder for work and couldn’t change settings. All also closes unexpectedly after selecting ‘discard’ after making a recording. Similar text to the screenshot above. How do we add weight to the bug tracker priority?

How do we add weight to the bug tracker priority?

You should upvote the issue in the bugtracker. So far it has only two votes! Maybe (but only maybe) they will fix it if more people show that it is important to them. So far Fairphone’s position unfortunately seems to be (more or less) “we don’t want to spend time fixing it, just install another sound recorder app”.

Which would be okay for me if we could get rid of this crippled thing then. But having two apps that sound almost the same and have very similar icons makes it difficult to find the good one when I need it.

Simply deactivate the built in one like me. Then you don’t see anything.