@THRS_Hamburg great to hear you found a solution for your problems. Next time please don’t wait 3 months before you look for help here in the forum or by Support.

I updated my fairphone to Kola Nut 1.8.7 yesterday evening but I couldn’t install the google apps (error message after downloading). TODAY nothing works, the whole phone is going crazy - things open and close automatically and I cannot do any thing on the phone (not even reading a message)! I had also problems with the last update… I’m sorry but this is quite annoying!! I guess that I have to reboot the phone…? I switched it on and off for some times now but nothing changes…

one additonal information: it also doesn’t let me enter my pin for my sim card at the beginning (it cancels the entering of the pin) and the touchscreen only works sometimes…

After updating my Android keyboard (AOSP) has stopped working. Help!!!

@Lilli Did you already reinstall google apps via the Fairphone updater after applying the fairphone OS update? For most users reporting a broken keyboard this solves the problem.

@Lilli This is a common issue. You can find topics about this problem by using the search feature of the forum (the little magnifying glass above).

@sje First of all: Do the touchscreen test to rule out, that your hardware is broken. If it is not, install Fairphone OS Kola Nut 1.8.7 again.

Hi, thanks, Stefan! Yesterday in the evening it magically worked again without me doing anything… So I installed google apps and it is fine for now. However, I’m a bit afraid that the same could happen with it again in the next months (I’ll go to Africa and I’ll have to rely on my phone there!). Well, I guess that I have to wait and see… But thanks again!

I have the same problem, but when I try to follow the guide, it doesn’t show me the option “updater” after I entered “update from sd card”. I removed my sd card before. How can I find the update in the recovery modus? Thanks!

You are not the first one lately who that guide doesn’t really work for.
Do a manual install instead:

Usually, you update your Fairphone 1 software via the Fairphone Updater app. In case this doesn’t work out, you can manually install the latest software version of the Fairphone OS. Before you star...

Either way you will need an SD card!

Can you give us some more information? Where are you stuck? What else did you try? What happens that shouldn’t or doesn’t happen that should? Do you get an error message?

Update completed, about 30’ minutes for download, install, restart, upgrade and optimization of applications.
After Software update to 1.8.7 FP ask to me to install the Google apps (Google Play and so on) and with only 2 clicks (1 on “I agree” and 1 on “restart”) it installed all the programs in 15’.

Good surprise, contrarily to the last update, now I haven’t lost all my personalizations of the homescreens.

Just some configuration of Xposed and Gravity box, but I think it’s normal because now I have to reinstall them…

I would like to translate your answer to English so the rest of our community also knows the anser to the question:[quote=“urs_lesse, post:79, topic:9638, full:true”]
The officially recommended way is to first apply the update to 1.8.7 and THEN the Storage Upgrade. However if you have had problems with your cache regularly, a different solution might work for you. But first, try to do it the official way.
[/quote]

Hello,
I successfully updated my Fairphone back in August to Kola Nut 1.8.7.
After reading the Fairphone Blog about “Long-term software support for Fairphone 1” I checked my phone with the Zimperium app.

And this is the result: 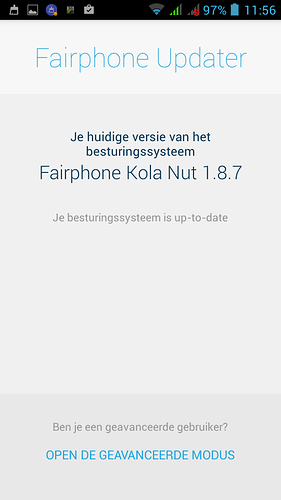 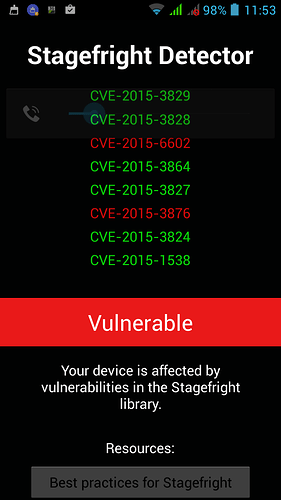 Those two CVE’s labelled in red were added to the app last week. They probably refer to what is being called Stagefright 2.0. See also here. This is quite recent, and it isn’t clear what the impacts are, or what patches will be available for which versions of Android. So for now, we wait.

Thank you for the clarification.