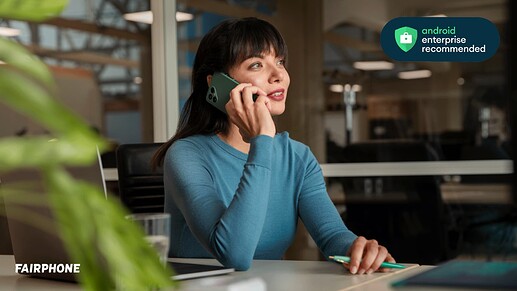 That’s awesome! Hopefully that will fix this issue as well

As always, link to the ota.zip and, since the kernel page doesn’t get updated, a stock A.163-boot.img.

Whoever needs that, have fun

no other real changelog or release notes given besides this basic security date statement.

Our latest software update for Fairphone 4 users is now available. [Fairphone AER] Software Version: FP4.FP4D.A.163.20220826 Security Patch Level: 5th of August, 2022 Update Size: 112.92 MB List of changes: The layout of the status bar has been adapted to better fit the display size. The network compatibility for several carriers has been enhanced. Some extra exciting news is that our Fairphone 4 has received the Android Enterprise Recommended (AER) Certificatio…

too bad that this forum / board is a pure mess, updates dont get pinned etc.
and that today the september 2022 android updates already appeared

Sounds like you’re a bit frustrated and take it out on the forum and FP. Please don’t. The forum is by the way very flexible and does show updated topics in latest, but you can also configure alerts for e.g. #osupdates or any other tags or categories (check the bell icon). Fairphone is always about a month late, it sucks, but every phone has pros and cons.

Could we get updated factory images as well please

There have been several cases of people bricking their FP4s when locking the bootloader and inadvertently triggering Anti Rollback Protection, because those images are ages behind what the custom ROMs ship at the moment.

“The network compatibility for several carriers has been enhanced”. Does anyone know which carriers?

The taskbar is now less thick when the phone is in an horizontal orientation, I think.

Maybe, it should be less thick in vertical mode as well. Also, in horizontal mode, the battery icon is now cut off due to the excessive rounded corners of the FP4. I don’t think it was cut off before, because in YouTube videos it looked normal before. Is it now actually broken? That would disappointing, I don’t think the statusbar was on anyone’s list for improvements, but now it seems to be worse. At least, sure, it should be smaller, but the front camera cut out and excessive rounded corners do not allow that.

Can someone check how the notification bar looks like in landscape mode that still runs the older version? Then we can confirm this. Taking a screenshot doesn’t work. It doesn’t take into account the rounded corners of the phone. I hope it was broken in the previous update as well, otherwise the QA testing of updates needs some improvement.

To be honest, I liked the thicker taskbar. The new, thin version just seems stuffed, too small and doesn’t fit the overall theme of the taskbar. The battery icon isn’t cut off for me. I’d prefer having the old-style taskbar back.

I wouldn’t say it’s broken, but yeah, the battery indicator (or the % sign) is partially hidden. I agree that the status bar was previously extremely thick in landscape mode, but now it’s the opposite extreme. Somewhere in the middle would be fine. Jeez, truly first world problems they are currently trying to solve.

Meanwhile, the camera API is still intact, as well as many other, more pressing issues.

In my opinion the narrower bar in horizontal mode is a fine improvement. Any pixel that can help fit more relevant content from applications into my screen is a win in my book. I don’t use horizontal mode very often, so it won’t make a huge difference in my life, but I think it ends up being a personal preference and probably one that just takes a little bit of getting used to.

I don’t think anything changed to the bar in portrait mode. The battery indicator and the time was always awkwardly positioned to lose some pixels behind the curves. At least on my screen, with my font/size preferences.

If you don’t use the percentage indicator for the battery then the icon is basically gone. I don’t get why this got passed their QA. And like you mention, there are more important things to fix, that might be fixed with the same time effort. Like this one: WiFi/mobile traffic arrows in status bar

But hopefully a batch of improvements are coming soon. By now I expect them to work on these improvements for Android 12. Let’s hope their QA is more on top of things for that release.

You’re right. I actually have the Display size set to Large, so even in landscape I can see the majority of the icon. But when it’s set to default, it’s almost completely covered.

Actually, this is how the status bar was before vendors started to mess around with notches and things like that. The notification bar doesn’t take up much space. That’s why I also never got how the notch and things like that supposedly gave more screen space. Because neto screen space is the same, while there is less room for proper front facing speakers and dual cameras…

I just did the update and watched the status bar closely. I cannot see any difference