The solution was to reset the google service framework and google play services in the app menu. Then the update apperas.

Great news @vismajor1, thanks for this information

By my side, I just got 1st May update for Google Play system (about 28MB) 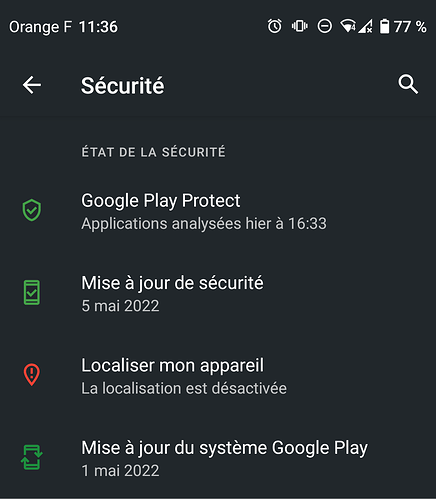 Did the WiFi 5 connection Stability improved? I always loses WiFi connection when I use WiFi 5, so I only on WiFi 2,4ghz. Support couldn’t help me with this problem.

A bit late, but here’s a link to the ota.zip if someone needs it

After waiting for the latest update for Vodafone provider customer, my FP4 today offered to update. After the update my FP4 is now more ore less offline, it has the ‘x’ in the LTE sign and shows very ugly behaviour. Signal and Whatsapp messages come through after some time, even with attached pictures or videos, but other apps that need Internet connection show an error message of missing Internet connection…
#contactsupport
I hope now to get a fix very quickly, as I can not use my FP4 anymore!!!

Plesse note you do not contact support by using the tag as this is a user forum. You may need to check your APN settings or if turned on, try to turn of VoLTE.

I have the same issue since the update and can’t figure out how to fix it. I’d be grateful if anyone has an idea and can help.

Hi and welcome, so did you try already something to fix it, like e.g. APN/VoLTE?are you also using Vodafone Germany?

Thanks for your response. I had struggle with the APN; was the first time I edited this. But I just actually managed to fix it by following the instructions here, for Vodafone Germany: Fairphone 3 - Anleitungen & Einrichtung | Vodafone-Hilfe

Perfect, works for me too! Thank you very much.
Could not imagine, that such a setting has to be changed, when updating OS.

I can confirm. I’ve been offline all the time since version A.128. I’m only online for a short time by manually changing the network type. Here we go again with the faulty updates from Fairphone. This can not be.
I’m really annoyed, especially since you already know that the next update will only come in six months with possible error corrections.

Unfortunately doesn’t solve the problem for me.

you already know that the next update will only come in six months with possible error corrections.

There have been 5 updates in the last five months

I’m more concerned with the error that some have and that it will take forever until everything works again. Some time ago there was also the problem that you could only use 3G. The patch was also a long time coming.

The strange thing is, I don’t remember my older phones ever having updates and nothing went wrong or was wrong to begin with.

Mobile phones since 1996, mind you my FP3+ hasn’t been playing up ~ apart from that short lived ‘auto-brightness’ issue.

Just don’t update to version A.128. Since then no more internet via “mobile internet” at Vodafone. on again
Update what went untested to the users! I’m really frustrated!

Update what went untested to the users! I’m really frustrated!

Given there some sort of partnership between Fairphone and Vodafone, it seems uncanny that maybe half of such complaints are centred around Vodafone and Germany.

Maybe it’s that 60% of FP owners are in Germany using Vodafone ~ but then how come Vodafone don’t pick this up before forwarding ???

They skipped A.0116 completely (at least seems that way if the other topics are to be believed) and jumped straight into A.0128, apparently without enough testing beforehand