Software Update: Android 11 for Fairphone 3 and 3+

Just to understand: you would still need to create 2 SSIDs as indicated by @OldRoutard , correct? Else how will it help that it switches “constantly” between 2.4 and 5Ghz, which seem to be an issue sometimes?

Like many users, I found the WiFi connection unstable on my FP3, flicking on and off regularly and booting me off WiFi for no reason. I fixed this by locking the WiFI to 2.4 GHz. Since upgrading to Android 11 the option to choose and lock to a specific WiFi frequency has disappeared and the problem has resurfaced making the phone unusable for home WiFi (e.g. Spotify etc)… It will tell me the frequency it’s on (it flits between 5 and 2.4 which I think is the root of the problem), but won’t let me manually select any more. Any ideas on how to solve?
Build no. 8901.4.A.0010

Else how will it help that it switches “constantly” between 2.4 and 5Ghz, which seem to be an issue sometimes?

Yes what you say does need considering. I have different SSIDs as that was the case, so it may be more of an issue than I was thinking.

Just to clarify, as yvmuell noted, for my ‘auto connect’ resolution to work you will need to see each Wi-Fi band, which as far as I can see can only be done if you have different SSIDs.

Whereas that is fine if you have control of the router, i.e. at home, when out in public this lack of option of choosing can be an annoyance.

I’ve updated to Android 11 and my Camera is now complaining about the SD card. It says “Your SD card is running out of space”. Even tough, I have over 10 Gb left. The SD is installed as portable. Already deleted the cache of the Camera app, but no success. In the settings, if I try to change the storage back to SD card, it immediately changes it back to the Phone. Before the update it was working fine.

It will depend upon which camera app you are using. The default camera can no longer use an externally formatted SD card, not that internal formatting is the solution.

After A11 google do not allow saving to an unencrypted storage. i.e.a portable SD card unless certain flags are clicked. That option hasn’t been added to the default camera, probably as it wasn’t updated at the same time as the A11 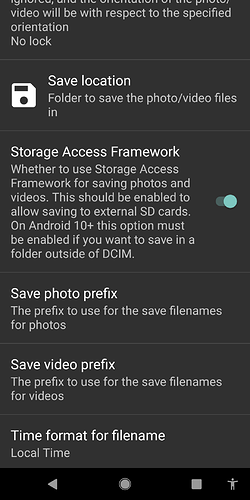 So the reference to running out of space may refer to the internal memory.
Check you have 10GB available there

Since upgrading to Android 11, my FP3 seems to be using battery power much more quickly - I have had to plug it in to charge before the end of each day, which I almost never had to do previously. Is anyone else experiencing this? Any suggestions?

Battery Saver is on, by the way.

Hi David,
Increased power consumption is typically observed after an update. The more data you have on the phone, the more this will be noticeable. Give it a few days to settle down and then, if you continue to see this, check the details to see what’s using most power.

Thanks @OldRoutard. I’ll see how it goes.

Since upgrading to Android 11, my FP3 seems to be using battery power much more quickly - I have had to plug it in to charge before the end of each day

You may like to see what apps are using the battery so much and you could use the option to do a safe start to eliminate any custom apps you have installed.

The update could have changed some settings and maybe Wi-Fi is different. For example before the update the phone would use whichever Wi-Fi band was pre selected, in my case 5Ghz but now it roams a bit and looks for the ‘best’ signal, which of course may not work out that well and continuous searching is battery usage.

You could try switching of Wi-Fi for a day in this example.

Hi Fairphone afficionados,
Today I received the A11 update over the air.
I can only say “wow!”.
My F3 is much more snappy and fluent than it used to be.
For now, I’m an extremely happy customer!
Thanks Fairphone, good job.

By the way, I can’t say much about the battery usage.
Since the update I’ve used my phone very intensively, so high battery usage is to be expected.

Welcome to the forum @tvdp
Great to hear from a happy user.

It kept stable even after restart or changing from WiFi to Mobile Data.

Hope this can be helpfull

This is a real problem for me as it makes my Fairphone virtually unusable. I have to manually connect to the WiFi everytime I want to use the internet, and even then it regularly drops out. I don’t want to start fiddling with my router as this will also affect others in the household, so unless this is going to get fixed I will have to get another phone - which rather defeats the objectives of getting a Fairphone in the first place.

Any ideas on how to solve?

To add and sadly repeat a lot that has been said

Any phone with Android 11 will have this as it now a core function.

The option to set each band, the 2.4Ghz and 5Ghz with separate names (SSIDs) is not a big deal. They will both keep the same password. The only difference is that you can see each band separately and choose, similar to before.

This won’t effect any other device in any serious manner. Each other device will have the option of selecting either or as it the case of Android 11 can be allowed to search for either and select the better signal.

The main difference is whereas before a specific band could be chosen 2.4 or 5 now the options are

Prior to the A11 changes and since the only problem I may encounter by not having both SSID’s on auto-connect is that if I go out of range of the 5GHz I have to manually switch to 2.4Ghz. Which as I said, I had to do before and presumably you had to too?

Which alternative camera app are you using? I am having the exact same problem with my SD card/default camera app, so will need to use a different one until this issue is resolved. Thanks!

Not sure what you mean as I think it was explained earlier that there is nothing to fix.

After Android 10 Google do not permit storing on externally formatted SD cards unless there is a specific flag set, as is done in Open Camera.

It isn’t available in the standard google or android cameras, i.e. not in the default Fairphone version or the Google offshoots GCams

So there is no issue to fix, apart from removing the now defunct option in the default Fairphone camera. I doubt Fairphone will override the Google specs as they are bound by a license from Google.

It may be worth noting that as photos get more demanding it is quicker for the phone to store to internal memory, which does not include formatting an SD card as Internal.

So the best all round option is to use any camera and then move the images to the SD card, regularly, and out of the internal memory.

The problem is that the camera app tells us that the ‘SD card is full’ and doesn’t want to take a picture, even if it is set to store the picture on the phone (not to mention that the SD card is far from full, but that’s beside this point here)

EDIT: turns out that even though the camera app warned me about the SD card, the actual problem was that the phone’s internal memory was too full. Once I emptied that a bit, it was fine taking pictures.

We have Google Wifi and this doesn’t allow the splitting of the 2.4GHz and 5 GHz signals, so this workaround won’t work for us. Thanks for trying though! The fundamental problem is the FP3, well mine at least, wifi connection is unstable. The previous fix of tying it to 2.4GHz worked as I think it was flicking between the two signals, but now it just repeatedly drops out for no apparent reason. Other A11 phones may not allow wifi freq selection, but they will not have this annoying glitch I imagine. It’s just frustrating that FP can’t provide a decent product along with the environmental credentials