Hello!
I’m selling my FP2 , dispatched in March 2019 due to replacement of the first device purchased for technical problems (original invoice dated January 2019).

The Fairphone is brand new besides the back cover being a bit dirty and a bit broken in the left-lower corner, nevertheless this causes no functional problem, just aesthetically it isn’t perfect.

It has a new microphone module just installed and the battery still works as when I bought it (it doesn’t last long unless you change setting to avoid useless option such as vibrating notification. Please to extend the battery life, make sure to charge it only when the battery is between 15% and 10% and once you recharge it make sure it recharges completely. By doing that I experience no drop in performance over time).

Phone still comes with warranty, and original invoice. Please check the IMEI: 359069071393245.
I sell my phone because I received the new FP3 as a gift for my birthday.

Your pricing is perhaps a little optimistic bearing in mind that it needs new case @ 25€, battery @ 20€ + shipping from Fairphone together with paying you for shipping of FP2 making a total in excess of 400€. Whilst I wish you luck achieving your price you may like to follow a few Ebay auctions, as whilst there was once supply shortage and higher demand release of FP3 has increased the supply of used examples depressing the price.

There is no need for a new battery, the one I offer with the phone has 6 months of life. Battery on FP2 simply doesn’t perform greatly when compared with other phones like Samsung or Huaweei, I just wanted to be honest with whom is interested in this phone and doesn’t know well its characteristics. So I just take the opportunity to clarify that my FP2 has no battery problem, just the model doesn’t last long (I have to charge it every 12 hours).

As regard the back cover, it is a bit dirty and broke in the lower corner but it doesn’t affect the functioning of the phone. It causes just a little aesthetic imperfection, which for me is not worth spending 25€ to fix it.

I think my price is fair enough considered this phone is going to last for many years and it is basically new. 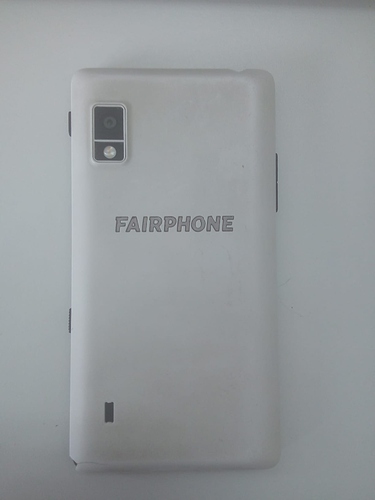 I agree that you will have a very difficult time getting €329 for a used FP2 with a broken cover. Besides trying to get people to pay a premium price for an unrefurbished, damaged device with no full warranty, even if it were ship shape it’d be an old phone that’s not really in demand anymore.

Depreciation is the name of the game when talking about consumer electronics. In 2011, I paid €400 for a Sony Xperia Z1 Compact - today, I can go on eBay and buy one for €40 (or less, if I keep an eye out for a little while). Likewise, at this point the FP2 just isn’t in demand anymore except with enthusiasts - and enthusiasts don’t pay top dollar.

This is evidenced by the fact that there’s an FP2 being sold right now on this forum, same as yours but with an extra battery and no aesthetic defects for £200 including postage, and another with a spare third party battery for €150, and yet another one with the old camera modules for £100. For the price you’re asking, someone could buy two or three functioning FP2s in equal or better shape.

The FP2 is supposed to last for years. So its price cannot drop by 80% after few months. Otherwise there is something wrong with the whole concept behind a Fairphone. A drop of 200€ in values is enough considered that the phone has still 1.5 years of full warranty. Anyways, if I cannot find a buyer I’ll gift it to someone, I’m not giving it away for a 100€, that’s just insane

It’s up to you, of course. Just keep in mind that even prices for new phones dropped after you bought yours. Mine cost €489, the last new FP2s to be sold cost €400, and the FP2 ‘new life edition’, completely refurbished phones with full warranty, even sold for 25 euros less than what you’re asking for your damaged, unrefurbished phone.

Caveat emptor: this is a refurbished FP2; it was not new in March 2019.

(About your asking price: that is up to you (seller and buyer) to decide.)