do you know that you can use via your SIM2 card only GSM?
German (https://de.wikipedia.org/wiki/Dual-SIM-Handy#Varianten):

I didn’t know this since 5 minutes… Using from the beginning (FP1, too) both slots, but at the moment not having a signal via SIM1

many dual sim phones support 3G (and 4G/LT) only with one SIM card, so you have to decide which SIM should be “the one”.

Normally you choose the SIM card which is used for data traffic as “the one”.

By chance I decided to have “the one” as SIM 1 – but I have not known this before. Thought both cards/slots are equal. Maybe technical reasons? Strange world…

You can actually decide which SIM slot should have the 3G/4G support. You only have to switch the other SIM card to “2G only” before, after that you can switch your preferred SIM card to 3G/4G. So I have 3G/4G on SIM 2 (because I use mobile data with SIM2).

Ah, thanks for your hint!

I searched, found & changed the setting: 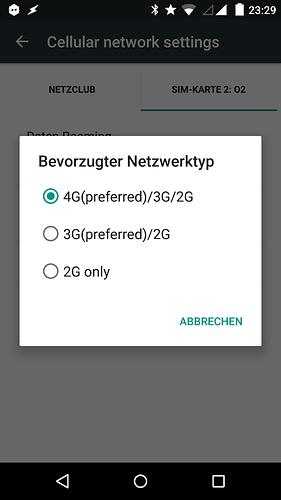 Yes. As far as I understand, the SoC only has a single modem. In Dual SIM Dual Standby only one SIM is active at the same time. For 2G this usually means there’s some form of time multiplexing to keep both SIMs reachable (and as a result, the other SIM is not reachable when making a call). 3G/4G seems to work differently, more like an always-on connection, which precludes time multiplexing - although I’ve never found a decent explanation, so I could have gotten the wrong end of the stick.

Dual SIM Dual Active phones usually have two modems (though I’m guessing this doesn’t necessarily mean both are 4G capable!), but also use more power as a result.

Here is a pretty good overview on dual sim types:

A dual SIM mobile phone is one that holds two SIM cards. Dual SIMs are popular in locations where lower prices apply to calls between clients of the same provider; they also allow separate numbers for personal and business calls on the same handset. Devices that use more than two SIM cards have also been developed and released, notably the LG A290 triple SIM phone, and even handsets that can run on four SIMs, such as the Cherry Mobile Quad Q70.