Since one week I have several related problems that make my phone almost unusable, and I haven’t found a solution for it in the forum so far. Here is what happens:

All the problems appeared at the same time, so I think they are related. What can I do? Thank you for your help!

What I noticed is that often before any of the above issues happen, a black (slightly transparent) dot appears at the bottom of the screen for a few seconds. No idea what this means.

Pages reload (when I’m using any internet browser, Gmail or Facebook, the page I’m on randomly reloads. So when I try to read something, suddenly I find myself at the top of the page again)

Go to Settings and search for “draw” to get “Draw over other apps” as a result, tap that, and again, and you should get a list of Apps with this permission … deactivate or uninstall them one by one to check whether one of those is responsible.

I will try that. But I haven’t installed any new apps. Maybe the problem was caused by an update.

Do you have a screenshot App or similar installed, which could indicate some kind of activity this way?

Here is a screenshot. Was very difficult to capture, as the dot appears only for a second and then fades away. On the screenshot it is almost faded away, but still visible at the bottom. 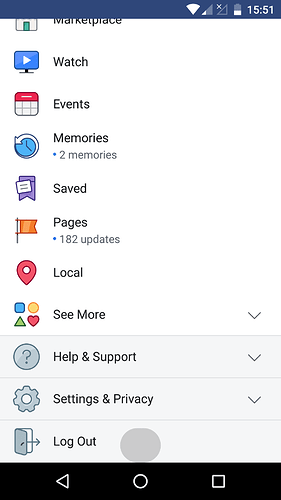 I tested if the problem still persists in safe mode according to this instruction https://support.fairphone.com/hc/en-us/articles/217869383
Unfortunately all the problems described above still continue in safe mode, so it seems that they are not caused by an app. What else can I try to troubleshoot? Or is the only option a factory reset?
Thank you in advance for your help!

I found a workaround for my problems now, the problems described above were caused by SIM2. During the last days I suddenly also had connection issues (the same ones as described here Since update: SIM-cards connection problem). I took out SIM2, and suddenly everything was fine, no problems anymore!

How can I solve my SIM issues? I use my second SIM card when I’m traveling for data (it’s a UK SIM). Any idea @AnotherElk ?

How can I solve my SIM issues? I use my second SIM card when I’m traveling for data (it’s a UK SIM). Any idea @AnotherElk ?

I don’t use Dual-SIM, so I have no experience with that. Some generic thoughts …

Try to put the second SIM into the phone again, perhaps this reseating already does the trick (seems to work for all kinds of cards now and then with a little luck)?

Try to swap the slots for the SIM cards.

Unfortunately all the problems described above still continue in safe mode, so it seems that they are not caused by an app. What else can I try to troubleshoot? Or is the only option a factory reset?

If the fault lies with some malfunction of the OS, a factory reset might not fix this. A factory reset on the Fairphone 2 only deletes all Apps and user data, leaving the OS as is (it doesn’t get re-installed or anything).
Instead …