My screen can’t rotate any moore. I have auto rotate on.

To me this sounds like a problem with the gyroscope which is unfortunately part of the core module.
So possibly you have to open a ticket with support.

Ok, maybe I’ll have to do that.

problem with the gyroscope

Just nitpicking, but it’s the accelerometer, not the gyroscope, that’s responsible for automatic rotation. It’s still on the core module, though.

@Jens_Eriksson
You could try an app that displays values read from the accelerometers. When unmoved, the Fairphone should display earth’s gravity. If that’s the case, it’s a software issue. If you don’t get sane values, it’s a hardware issue.

My screen can’t rotate any moore. I have auto rotate on.

Are you in an app which supports landscape mode? For example, the home screen does not support landscape mode and will always stay upright even with auto-rotate on.

If you need help with an accelerometer-app let us know.

Yes, that would be nice.

I can recommend “sensor readout” ( https://play.google.com/store/apps/details?id=de.onyxbits.sensorreadout ). There accelerometer is the first sensor in the list.

The accelerometer wasn’t on the list, and no other app seems to be able to find it either.

Well, if “LSM330D Accelerometer” ist not on the list then I’d say the yellow marked device at https://www.ifixit.com/Teardown/Fairphone+2+Teardown/52523#s115301 (Step 13) may have a problem and so doesn’t make it into the list…

Hello, could someone with working accelerometer (and maybe LOS) post a picture, which sensors are found on the FP2 and maybe how I can recognise if my accelerometer is broken (which Axis should read what?)?
Mine shows these sensors: 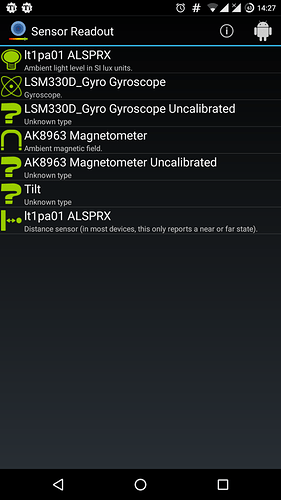 There is defenitely something wrong. I have many more sensors listed: 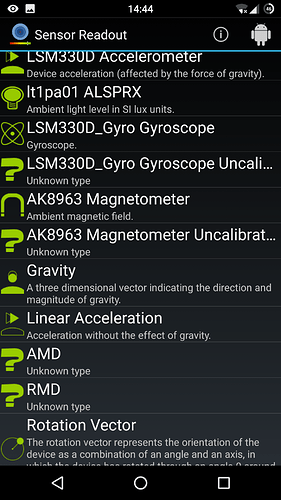 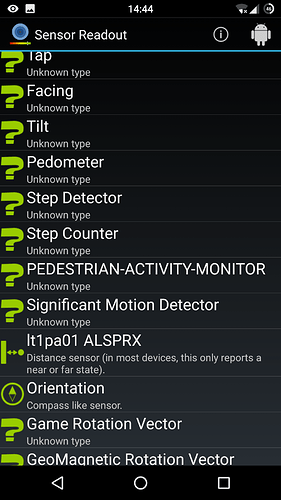 Opened a ticket. Thanks.

Everytime I reboot my phone, the accelerator works, then after some time it doesn’t. I have no “funny” apps installed and nothing overwrites my screen (except for Android night light).
Does anybody have an idea what could cause this? Is it hard- or software?

I do have the exact same problem. Accelerometer stops working . After reboot it’s OK again. But only for a while

@D2.Tyrael: how old is your phone and which OS do you use? Mine is hitting the 2 year mark an I run LOS.

Mine is two months older (one of the first 17000) And I’m running the stock fairphone OS. I’ll try a complete reset the next days. If you don’t have it you realize how important the accelerometer is…

Have you opened a ticket? They never had a broken accelerator before. I’ll post the outcome of many support ticket.

Not yet. But i think i have to do it now. I’ve done a full reset. But now I’ve lost my accelerometer completely. So even after a reboot it’s not working any longer