Running for more than 1.000 hours, but with a flaw

My FP2 is running for over 1000 hours now, but it’s not completely true, because there were some Android GUI reboots.

Interessting the same Phone, with the same OS build, had reboot problems before (a real reboot all 4 to 7 days)
Now it’s running much better, could be anything starting from the wheater 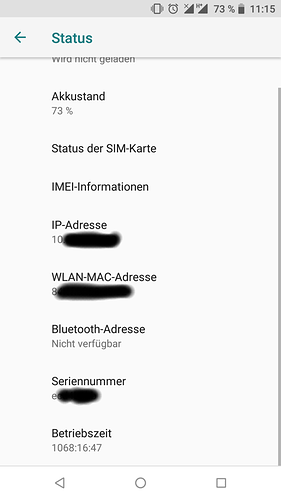 Interesting.
Never had seen that before.
Still, the running-time seems to be measured from the last time the phone was shut down completely, as mine (first batch) has a running time of merely 68.7 hours.
(Not that I actually remember having shut my phone off or letting it run dry.)

So, in the end, this entry does not seem to be telling too much.

So, in the end, this entry does not seem to be telling too much.

It tells you how long the device has been running without the often mentioned random reboots. What else would you expect it to tell?
With a few exceptions my phone is only restarted when a new FPOS is available. So lately the uptime tends to be longer than last year still…

No, it’s not the whole truth
When I had a real reboot (with bootload and all) the running time was reset.
On my last soft reboot, I wasn’t even ask to reenter the sim pin
But yes it’s still not perfect, and not the whole truth
I just wanted to get past 1.000

What else would you expect it to tell?

Well, the running time of this phone obviously.
E.g. when selling/buying machines, instead of the mileage used for cars, you get the running time to measure the wear of the product. What good would it be to know how many hours the machine has run since it was powered off last time or how many miles a car has run since any random date. Maybe it is interesting information for software developers, but else…

The reboots are counted as crashreports under Hiccup.

When coming from the Linux world where ‘uptime’ is an own command the meaning of this field is quite obvious. It’s the software perspective: How long has the system been running uninterruptedly. While the operating hours counter gives an indication about how much the hardware has “aged” since it was new (started for very first time), the uptime gives an indication about how much the software side has “aged” since the time when it was “new” (fresh boot). That could be memory not having been freed again and thus not being available anymore, zombie processes etc.

Uptime is irrelevant indeed; downtime is what matters.

Now couldn’t unlock the phone any longer, so I had to reboot