Three years ago, we introduced you to a crucial partner for making the Fairphone 2: Hi-P International Limited. In addition to having the technical capabilities to assemble our phone, we partnered with Hi-P based on a shared commitment to improving working conditions. Although improvements have been made over the years following Fairphone’s social assessments, we were unable to develop an impactful Worker Welfare Fund program. While we very much regret we were not able to achieve our goal on this topic, the experience has provided valuable input for our future approach to improving worker welfare.

As a social enterprise, one of our goals is to improve working conditions and increase worker satisfaction at the factories where our phones and components are made. In order to establish a lasting impact, we want to go beyond the traditional compliance model of ‘checking boxes’. Instead, we make an effort to work closely with a handful of selected suppliers to assess their current situation and make a collaborative plan for improvement.

We have different levels of involvement, ranging from chemicals management to worker engagement programs. We believe that an effective dialogue between workers and management, building on a system that genuinely represents all workers in the factory, is a healthy and sustainable long-term solution for making a positive impact on working conditions, which should complement just regular auditing. When we began this phase of work, we saw the Worker Welfare Fund as an experimental yet promising approach to achieve this long-term positive impact together with our suppliers. The goal of the fund was to promote dialogue between employees and management, which includes training employees to voice their suggestions and concerns as well as contribute to implementing improvements.

When we began searching for a final assembly manufacturer for the Fairphone 2, we knew that our requirements were not an easy sell. We were making a completely new type of modular phone, had fairly low production volumes and also required our new partner to be receptive to invest in improving working conditions.

Hi-P and Fairphone entered into an initial agreement in 2015. In March of that year, we agreed upon a timeline for implementing the Worker Welfare Fund, but progress kept getting derailed, for different reasons. 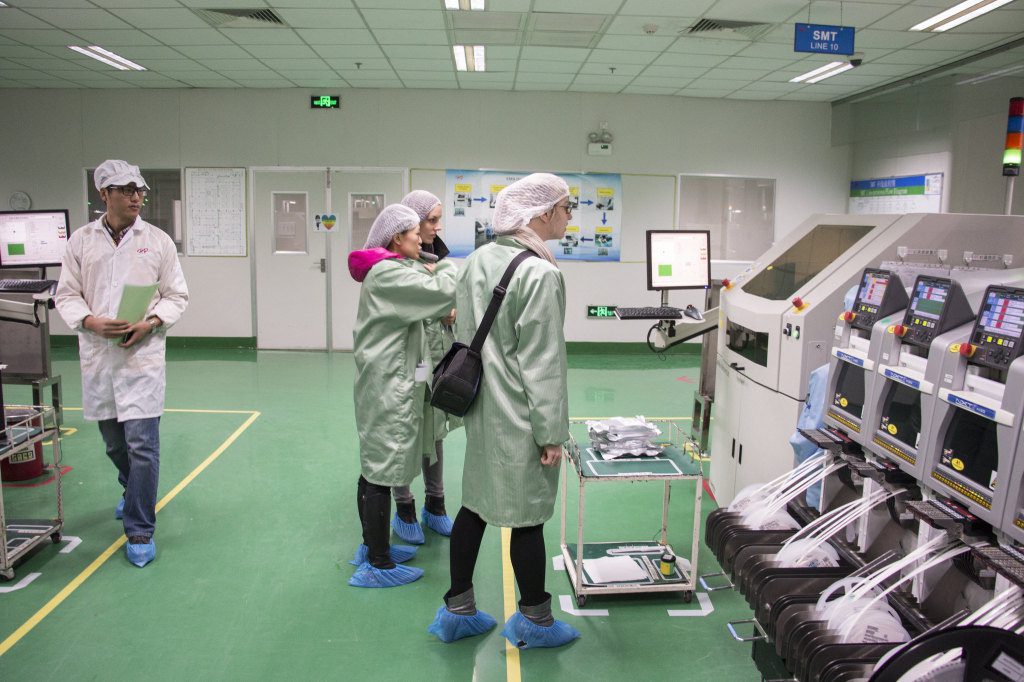 The biggest challenge was finding a way to integrate the Worker Welfare Fund with the worker representation system that Hi-P already had in place. Unionization is centrally governed in China: the All-China Federation of Trade Unions (ACFTU) is the only legal union. ACFTU has the mandate to determine how local unions are organized and to approve or veto local election results (ILO 2011, p.15; ITUC 2012). When we were developing the Worker Welfare Fund structure and processes, we were challenged to ensure it would be built up as not just another parallel representative system next to the system already in place, and therefore to align them with the local union governance and organizational guidelines. This resulted in differences in views on topics such as how to organize the voting process and the oversight of the Fund, which we unfortunately could not overcome.

We also faced continuous legal and bureaucratic obstacles. Part of the problem was the structure of the fund itself. For example, in the past we had found it costly and overly complicated to set up a Chinese workers fund and related banking requirements in the Netherlands. So this time, the plan was to set up the fund in China. However, we learned that as a foreign organization, Fairphone can’t co-own or contribute to a fund registered in China. In the end, a longer list of these kind of obstacles became a barrier for progressing with setting up the fund.

Finally, unstable Fairphone 2 production made matters more complicated. We had some issues with component shortages, which caused ongoing gaps in production. The unstable production impacts the relationship, caused irregularity in the size and sustainability of the workforce and distracted both parties from making progress on the Worker Welfare Fund.

The challenges described above translated into more than two years of discussions and negotiations regarding the fund. Despite a genuine willingness to explore the topic of worker welfare together, in the end we didn’t find sufficient common ground required for what is needed in our view to set up a successful Worker Welfare Fund.

While we highly regret that we couldn’t implement our fund with Hi-P, we also learned some valuable lessons, which shape our ongoing approach to improving worker welfare.

One of the learnings we took away is that we can have high ambitions, but in order to achieve them we need to have a common ground and aligned views on how to get there together with our supplier. Before entering or even at the start a business relationship, it is not always clear to what level this common ground exists. This cannot just be identified or settled in an audit or a contract. The level of partnership we seek requires a deeper level of engagement, and is also largely dependent on the willingness, drive and possibilities of our counterpart. Success is not guaranteed, but nevertheless still very worthwhile aiming for. Two factors that will make the chance for success higher: 1) identify and work on the topic of worker welfare with suppliers [strategic, but can also be second or third-tier] who show genuine interest and flexibility to experiment on the level of worker voice/representation [see for example Broadway] and 2) make the link with the benefits for overall business as tangible as possible, also to generate more genuine interest as described under number 1). We use for example the data analyses generated by the IDH program [refer to website], based on data collected amongst 50 electronics manufacturers in China that participated in a worker representation program between 2010-2015, where a correlation is shown between increased trust of employees towards management through improved representation & dialogue, which in itself correlates with lower worker retention and higher worker satisfaction. This is also why we work on further embedding our worker welfare programs in a broader business case for driving improvements, and connect business with social key performance indicators in our manufacturing agreements.

We will continue to work with our suppliers on strengthening employee-management dialogue and worker representation, and follow up on our commitment to dedicate a significant part of your contribution to the phone to worker welfare and other social projects. And yes, we will probably be faced with yet a few other detours along the way. But we believe that is part of the challenge, and we are up for it!

International Trade Union Confederation (ITUC) (2012) Report for the WTO General Council Review of the Trade Policies of the People’s Republic of China. https://www.ituc-csi.org/report-for-the-wto-general-council,11476

My thought on this, which I have carried since I shortly saw the broadcast on the private TV channel Pro7 about Shiftphone was, if there was an option for companies to join up in this approach. Shiftphone also started off having to overcome several obstacles to achieve better work conditions for the workers and also assure better salaries. The expression (and attitude) of most workers as seen in the report were like “this german businessman must be stupid wanting to change such a classical way of working in China”. But now the involved workers wer convinced and actually are satisfied with what they´re doing for Shiftphone and with what Shiftphone does for them.

Jointventures are nothing new and this may also be “common ground” to step onto for FP & SP.
This does not have to take any deep impact on their individual product lines. And maybe both of them can achieve more toghether with combined power, share experiences and even catch more parties (eventually in other business branches as well) which are also truely interested to get things better. Publicity could also rise and support sales, development, growth.

I guess, that this paragraph is really important, as it shows, that “size matters”.

Finally, unstable Fairphone 2 production made matters more complicated. We had some issues with component shortages, which caused ongoing gaps in production. The unstable production impacts the relationship, caused irregularity in the size and sustainability of the workforce and distracted both parties from making progress on the Worker Welfare Fund.

Understandably a manufacturer needs a reliable base for business and I guess it’s even more complicated, when a company is used to high quantity products.
Maybe the sugestion by @Patrick1 could help overcome or level the fluctuations in workforce. Although I guess it’s quite a task to partner up with another company that way, if you don’t share all the necessary principles. For the chinese manufacturer it has to be like dealing with just one company.
Or so I would expect.

Although I guess it’s quite a task to partner up with another company that way, if you don’t share all the necessary principles.

Yes, it could also be.

But we believe that is part of the challenge, and we are up for it!

So this could be an alternative way to go since both ways are challenging. At least FP by now knows how their first approach went.
Just reaching out to see if there is any positive feedback from other market companions may show if further effort that way would make sense.

Hi Patrick and BertG, greeting from FP HQ - thanks for thinking along! Always grateful for our community’s input!

As Fairphone we aim to create a fairer electronics industry. We dont want to focus solely on our own production, rather we aim to find solutions to working conditions issues that can be scaled-up and adopted by all other electronics companies in the world, to change the entire industry. In doing so, definitely yes we seek collaborations and share knowledge with other companies, manufacturers and NGOs!

Vertical integration into the supply chain is a potential approach to addressing some of these challenges at a specific site. However in a supply chain that spans over 1000+ specialised manufacturers in the different ‘tiers’ (or stages of production) of a smartphone, we will always be working with suppliers. So we will continue to develop new ways to positively impact workers’ happiness and working conditions throughout the supply chain - in a way that we can scale up and the rest of the industry can as well! Dream big

It will be a bumpy ride, yes for sure, but as it says in the blog: we are up for it!

So again this looks like pioneer work made by FP.

Wow, this sounds even better, hopefully resulting some day in some kind of guideline or overall process for fair production which other companies or start-up entrepreneurs can adopt.

These actions are also cost-intense and spent resources, that´s what´s also going on in the background needing attention. So it´s not all about sales by any means as someone could assume.
Such assumptions were mentioned sometimes here in the forum by annoyed users not being satisfied with the product, customer service or the development going on with FP2 (FP3).

I wish FP best of luck by their approach to reaching another milestone.