What about a new Café* category alongside the #community category? I imagine it could work a bit like this**:

General + Unrelated could also both just be uncategorized or joined with the Roadmap category in a super category.

Anything that’s not directly connected to any of the phone products (FP1/FP2), the company itself or an OS/#apprecommendations would go into the super category.

Note that Repair, Hardware, Roadmap and Software categories would be most affected by this (I think The Viennese coffee house (German: das Wiener Kaffeehaus, Bavarian: as Weana Kafeehaus) is a typical institution of Vienna that played an important part in shaping Viennese culture. Since October 2011 the "Viennese Coffee House Culture" is listed as "Intangible Cultural Heritage" in the Austrian inventory of the "National Agency for the Intangible Cultural Heritage", a part of UNESCO. The Viennese coffee house is described in this inventory as a place, "where time and space are consumed, but onl...

** Though I would avoid the namings “General” and “Unrelated” because they are not self-explanatory.

(to finding common ground among just the two of us

I just have a few points of criticism left.
E.g.: I don’t feel the articles for the Café sub-categories. Especially “The Software”.

Why do you think we need this separate from FP2 help?

List of local repair shops that are familiar with Fairphones (by City)|Hardware > Repairs|:question: Guides or Help

To avoid confusion (is this a guide or not?) we could make a super category for all wikis and a sub-category for wikis.

I fully agree with these.

I also agree with the rest of your examples btw.

Since you asked: I can’t make myself care about it enough to spend time on it.

Ok, thanks for the honesty!

Im just worried that in the end people, who are accustomed to the status quo, are confused or point out inconsistencies that @paulakreuzer and me hadn’t considered.

I don’t feel a need for change, but if you do, feel free to act, I’ll just adapt

E.g.: I don’t feel the articles for the Café sub-categories. Especially “ The Software”.

Do you want to discriminate the little article???

I’m not insisting on it, but at least for phone and company it would make it clear that the category is not about each and every phone, but about Fairphone’s product. I’m fine without it, too.

Why do you think we need this separate from FP2 help?

Oh, do you mean that we simply should have a structure like this, where issues with the Google-infected OS and with the hardware go into a “general” FP2 subcategory of help (like it is now with FP2 Help)? Visual:

I first thought that there should be one Android 6 category and one hardware category, but this setup is probably better from a non-technically-inclined FP2 user’s perspective (reason: how should one know from the first moment whether it is software or hardware failure?).

To avoid confusion (is this a guide or not?) we could make a super category for all wikis and a sub-category for wikis.

Since the ✏ List of local repair shops that are familiar with Fairphones (by City) is not a guide per-se, I’d put it where people in need would find it helpful: the Help category. The Help super category should host all such topics that aren’t guides, but are still relevant for both FP1 and FP2 (can’t think of many other topics atm).

Please give feedback on the remaining question marks (?).

I do care, but that’s not something I’m good at. I trust the people who are mods and use the forums a lot to take care of this. I never even use the categories TBH. I just look at my notifications and the recent threads…

I suppose it is important the categories work well for the new people, but also for regulars and moderators. I take it you can see the viewpoint of all 3 interest groups. I mean, someone who’s really new here ain’t gonna read this specific thread.

don’t feel a need for change, but if you do, feel free to act, I’ll just adapt

I like the latest suggestion for Help and Guides super-categories, preferably with having the same subcategories for both.
I would also support the suggested Hardware sub-category.

I think if we wouldn’t have the categories there would be chaos on the forum.

I at least use them a lot: 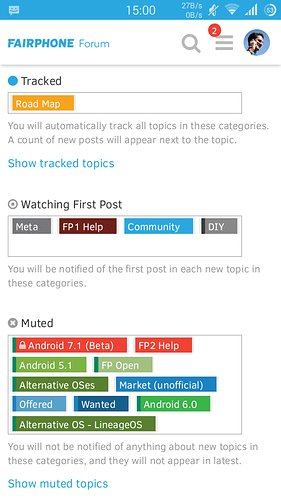 I agree with @johannes in every aspect.
Yet, there is just one point, that makes me wonder:
Why the “super”-category Cafe?
I can understand, that it’s a local (Vienna) thing, but in general this name lacks the explanatory factor, that all the other super-categories have. Plus, just from the name, there is no evident distinction between Community and Cafe, as both names imply a social meeting point.
Therfore I would opt for another name. If I understand correct, that this category is for topics around Fairphone, but not Fairphone in itself, it’s something like a Fairphone Orbit? (Well, that - as a name - would not really be more explanatory, just more different from Community.)

The categorisation of the forum just doesn’t excite me

I personally wouldn’t expend so much effort on trying to have a clean & tidy forum. While the sub-cats are useful, I don’t think that means we should always have them for each super-cat. It just means you (I say you because I never move or categorise topics) spend loads of time doing something which doesn’t necessarily mean very much to everyone.

#'s are the future

I think that Café is pretty omnipresent, except in Germany, maybe: Plus, just from the name, there is no evident distinction between Community and Cafe , as both names imply a social meeting point.

Community might be a “social meeting point” in its use in German speaking countries. Wikipedia describes it as follows: A community is a small or large social unit (a group of living things) who have something in common, such as norms, religion, values, or identity. Communities often share a sense of place that is situated in a given geographical area (e.g. a country, village, town, or neighborhood) or in virtual space through communication platforms. Durable relations that extend beyond immediate genealogical ties also define a sense of community. People tend to define those social ties as important to their iden...

In my head Community is for discussions about the Fairphone community and Café is for everything else that Fairphoners want to discuss.

An alternative name for Café could be “Lounge” and for Community it could be “Movement”. (I’m not saying that we have to change both.)

As long as you don’t call it coffeeshop

I like the word Lounge more (but whatever floats your boat); cafe and lounge would refer to casual chat. On another forum we had a place called (translated) “canteen”.

I don’t interact with the categories system directly —I just check New and subscribe to those threads I like, so updates appear on Latest—. For what I’ve read here, I’m not the only one. I think moderators and categorizing-people like you both are more aware of the categories in a daily basis.

I’m specially lousy at classifying things. I always struggle at putting things in their right box (for who?). But since you are empathetic people and you are doing a thorought work considering new visitors, I’ll just make some observations, completely IMHO:

I like that idea a lot, but I would be more strict about it.

PS: I guess the biggest difference just from a what-goes-where point of view would be that a lot of topics would move from Community/Participate to Discuss.

I think I can agree with many of the last remarks.
The categories don’t interest me: I only use the “latest” view, where I can see the topics I track (and the new ones). The forum grew so much, I don’t try to read everything anymore…

Further, this topic itself seemed interesting, but it went on too quick. I think there where already 15 or 20 (long!) posts when I visited the forum the first time after this topic was created. This was not very encouraging to take part in the discussion

On topic, I don’t feel the need for change. If it would be done, I agree with @Roboe: “active” supercategories seem more logic.

All in all, I would advise not to spend too much effort in it. (new) Users will keep making mistakes, even if it’s the most logic and intuitive system imaginable

Why use categories instead of tags?

This has been covered a … number … of times already, but: User tagging does not work very well beyond tag #2. Everyone can tell you a question is Java and maybe that it involves I/O but beyond that… super noisy. Keep It Simple. One category,...

I do think we need to keep things simple, and also avoid doing things that make it harder (and therefore less accessible) without the ‘knowledge’.

At heart we need

Sub-cats beyond this are not essential for all of these