Poll: Where do you see yourself on the political spectrum?

I like to think about a world where we’re all equal and all have plants rights! Nice poll though

According to this poll, the FP Forum is pretty links-grün-versifft and we’re way too many Gutmenschen here who believe in the Rotfunk-Lügenpresse

I am rather surprised there is actually one person voting Nationalism, wouldn’t expect that so quickly here

I’d not be sure that was serious.

me neither, but still

14 posts were split to a new topic: About NationStates & Do right Libertraians exist?

So many voted for “green and social”, It is really no surprise that they are found here.

Includes me, of course.

I love this long list of potential leanings. I’m an American, we have only two practical choices in almost all elections, even local ones. At least in a lot of western European countries there are at least a few more practical options.

I suppose the best thing to describe me would be a Democratic Socialist. I’m further left than the American Democratic party is but I wouldn’t call myself completely socialist, does that make sense? (before you ask, yeah I’m just as displeased with my president as you are. Last night he forgot the words to the song “God Bless America”, I need to cross the Canadian boarder)

I voted for social democracy in the poll above but this does not exactly describe me.

I want to conserve capitalism with all its benefits and at the same time eradicate all its disgusting flaws. I love progressive taxes on all (working and capital) incomes but I hate consumption taxes (like VAT) because they hit the poor the hardest. I want all people to live as freely as they want as long as they respect the freedom of others - therefore I think a strong and resourceful police and jurisdiction is necessary (it’s the last line of defence of our democracy). Education is the key to welfare and social ascension, but noone should be left behind as every individual can be of valuable service to the society. Our environment needs to be preserved, but not at the cost of falling back to the stone age. Climate change can be a chance for further development of human technology and society. Racism is criminal, nationalism is silly and patriotism is favourable.

That’s the short description of my political ideology.

I took 3 years of German in high school and I remember one of my teachers told us that how far left parties in Germany and other European nations get would make our heads spin. The fact that I want sensible gun control and healthcare for all is abhorrent to most of the people who represent me.

It’s not on the list, but I myself like to describe myself as a federalist. I’ve never been on the side of the empire (both on the big screen and real life). I see federated structures as one of the best ways to integrate the local and the global without drifting into nationalism / tribalism or a heartless new world order style global government. Saying this, there is a bitter pill in my life as a EU citizen in the UK that is called Brexit. I prefer to add ‘sh’ after the x…

I don’t “see myself on the political spectrum”. If any particular political policy (or politician whom shapes their ideas on the best available evidence) ) has been shaped using the empirical evidence than I’m far more likely to be able to comprehend what are the policies aims and objectives are, and if I agree with those aims and objectives (within the context of what social regulations society needs to be healthy and sustainable).

In contrast to political policy that is based on a certain groups ideology (inc prejudice). A idea (inc ideology) maybe nothing more than a pipe dream ( sentimental based belief). Testing a idea could save a lot of people a lot of wasted time.

Green Social Democracy all the way!

Apparently German election polling is getting closer to our poll results above. 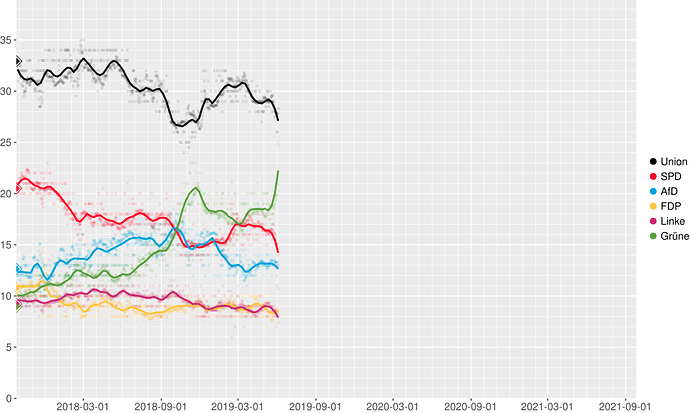 both not worth to talk about, but there is a little mistake in your post.

The forum poll is 55% green and 43 % further left.
I doubt, that I will live to see any election coming close to this.
Left parties (besides the green one) have lost voters, making it in total less than 50%.

And as @ElKrasso correctly stated, the legend is not correct.
On the other hand, while I dislike AfD quite a lot, I would - right now - not identify them as national socialism; nationalism for sure.

you may be right, erm not right maybe, but correct.

I don’t know what happened. I read AfD in the graph and typed NPD into Wikipedia to see what Ideology they belong to. A Freudian typo maybe?

The forum poll is 55% green and 43 % further left.
I doubt, that I will live to see any election coming close to this.

I’m sure some city will get close to that some time.

Probably a district of a city will get there even sooner.

In Vienna there is a “Wahlsprengel” around Yppenplatz that voted 50.17% green in the EU election. Of course there are only 659 voters and they don’t have their own local government.