Hi! I’ve had my fairphone (Fairphone OS 19.08.1) for about a year now with no issues and in the past few weeks it developed this problem where the phone just randomly restarts after a number of these symptoms:

Recently I have also tried shooting a bunch of videos and noticed the camera was very slow and laggy, but recorded as usual. When i came home however, I noticed that about half of the videos I took weren’t saved at all and the other half where choppy for a few seconds before they also freeze completely (including audio, but the seek-bar keeps going for the entire duration of the video) and completely unusable.
I have no problem with the phone other than these random restarts.

Here’s what I have tried

I would really really appreciate any and all help, maybe someone can tell me how to properly diagnose this or maybe give me some pointers on what I am looking for in the bugreport.
Thank you very much in advance.

You can start the phone in #dic:safemode. If you have a working backup you can also try a factory reset and check again then. This would all help to see if it’s a hardware or software problem.
In case you are uncomfortable with that you might try to contact #fairphoneangels.

From out of the blue I would think of thermal problems.

If you run a cpu stress test app (like cpu throttling test from playstore) to see how the phone reacts when it’s heating up. 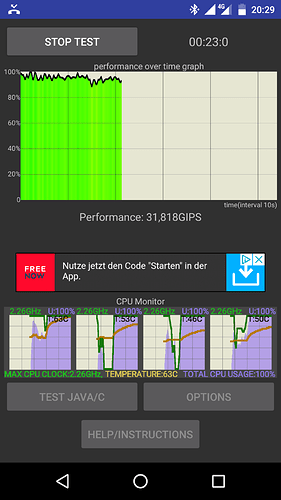 You can see the temperature of each cpu core. Should the phone also start to lag after some time or crash it may be due to overheating.

Look at this (a recent core module teardown) 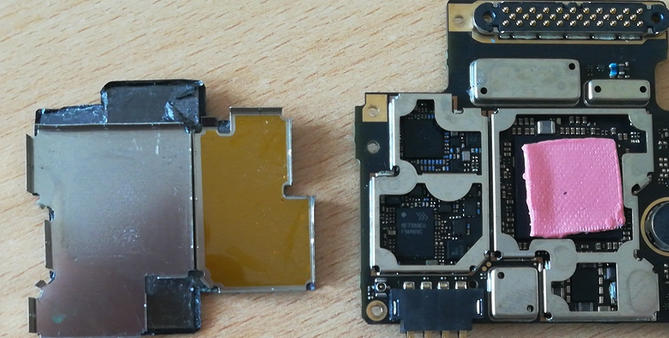 The pink square is a thermal pad (on top of ram&cpu) used to connect semiconductor components to some kind of heat sink. In this case just a metal cover.
Some are self-adhesive, but not all. It may happen after time that the heat conduct decreases and the cooling becomes insufficient leading to overheating of the corresponding parts. They can be replaced, but complete disassembling needs to be done.
First of all though you should follow @Volker advice and also check if there are more resource hungry processes running in the background keeping your cpu occupied (also consider network access).

Thank you for posting, I’ve contacted the Fairphone Angels

Thank you very much for your detailed replies and helpful suggestions:
I do have some good news and some bad news to share:
I tried both starting in safe mode and a full restore (from a previous backup). Unfortunately both of these methods didn’t solve my problem.

I can also report that I do feel my phone getting a bit hotter sometimes (when looking at maps for example) and can safely say, that the phone is not heating up when I play a video and the resets also happen immediately after turning the phone on before it even reaches normal operating temperature.

BUT I decided on a whim to turn off the blue light filter I was using and amazingly have not had that problem since. I need a few more days of testing before I can be sure that this was what caused my issues, but I figured I’d post my solution anyway since people like J_L_E might stumble upon it.

I experienced the some similar issues lately.
Random reboots of the phone, sometimes while it was just laying on the desk an not in use. So I can tell for sure it is NOT a overheating-only problem.
Watching videos in any app became impossible as the screen often freezes after a few seconds. Sometimes touch stays active and I can exit, most times not.
The artifacts sometimes don’t move, another time they’re like flowing over the screen, from the right to the left of the screen. Artifacts seem to occur more often in the evening, but maybe that’s just because I’m using my phone less during daytime.
Interestingly I didn’t have these problems a few months ago and I didn’t install any updates or whatsoever in the meantime.

BUT I decided on a whim to turn off the blue light filter I was using and amazingly have not had that problem since. I need a few more days of testing before I can be sure that this was what caused my issues

I tried this. Although this bluelight filter caused me some other issues before (with my alarmclock in the mornig), it didn’t help me out this time.

I’ll try a factory reset and reinstall Android form scratch to make my FP2 useable again. But in this condition, I’ll have to replace it with another phone as I need to have a reliable one in winter

Sorry to hear that turning off the blue light filter didn’t solve your issues. I do still get the random artifacts sometimes but my phone has been completely stable for the last two weeks now and watching videos is not a problem anymore.

Would you mind posting an update after you have reset your phone? I’m curious to know wether or not this would get rid of the screen glitches. Thank you.

ok so I installed my FP2 from scratch, as AnotherElk described here. (One more time: thanks for that!!)

I can watch videos now, but the artifacts still occur the same way. And there are still waaay too many random reboots, clearly without overheating. Additionally, my phone lately stopped responding when the alarmclock went off. It just keeps ringing, touch and buttons out of work and the only way to turn the alarm off is to remove the battery.
I didn’t install many apps, deactivated almost all googleapps as I’m not using them and I periodically reboot my phone to keep the phone from running too many apps in the background.

Nothing I tried really helped. As I said, I really need a reliable phone when I’m out in the mountains and my FP2 clearly isn’t anymore. So I came to this point to soon say goodbye to my FP2.

I have very similar problems with my FP2 (now 4 years old):
-frequent random reboots, up to 20 per day, also happening shortly after I switch on my phone, hence not due to overheating
-the image on screen getting scrambled with colored squares or white noise at random times, but some apps (e.g my bank app) seem to trigger it more often than other apps
-videos in YouTube freeze after a few seconds; videos in web browser do not freeze
-recording of videos with the standard camera app slows down the phone

I have tried the factory reset twice already, so it isn’t a software problem either.

I will try to switch off the blue light filter. If that doesn’t help, I’ll check the thermal pad of the core module. And if that doesn’ t solve the problem, I’ll send back my phone for repair.

I had the exact same issues you described.
After turning of the blue light filter they seem to be completely gone. My phone is stable for a few days now and I can watch videos on it without any problems.
Thanks a lot!!

Before trying your tip I actually took my fairphone apart and realised that when I shake my core module I hear a small sound, like something small broke loose inside. I tried a friend’s fairphone and there was no noise.

Hope that this might be helpful to other people experiencing the same issues. Thanks again!

Before trying your tip I actually took my fairphone apart and realised that when I shake my core module I hear a small sound, like something small broke loose inside. I tried a friend’s fairphone and there was no noise.

This could be the G sensor making noise. My FP2 is in totally fine state but also makes a small sound when I shake it.

I’ve had the same problem. Turning off the blue light filter only solve the random reboots, not the artifacts and video don’t always play in apps such as Twitter, I have to open them in a browser. Just did a factory reset and it’s the same.

I like the blue light filter, isn’t there any solution?

I had the same problem of youtube videos freezing while the audio plays and when i clicked on a new video it loaded for ages. Turning off the night light blue light filter completely fixed the issue. No idea how! I’ve also experienced random pixels and im not sure if they’re fixed yet, will have to use it for longer to know.