Plastic bolt under one of the blue clips is broken

as the title says, one of those bolts where the blue clips are holding the phone together is broken. Is there any other option to fix this than switching the core module? I can’t see a way to replace this so I would be very grateful for any hints or 3D-printable workaround spare parts.

Could you take a photo of the damage?

I think it may be possible to unscrew the core components from the plastic frame and exchange this frame, but don’t know whether you can actually get such a plastic frame and what screws are used to hold the core module together. (I currently cannot open my FP2 to check since it is in use as a wifi hotspot)

I will, as soon as I manage to take a picture in the mirror and post it here.
FP support line told me that they will not replace the whole core module for a broken bolt as long as its not absolutely necessary. And that I suggest to their developer team what I was asking for in this thread: a 3D-printable plastic thingy for replacing the functionality of that bolt of holding together screen module and the big frame. Without the bolt, the blue clip is doing pretty much nothing because it hasn’t something to attach itself to. So, how do I mak a suggestion to the developers? A new thread? An email to which adress?

Thanks in advance for everything. 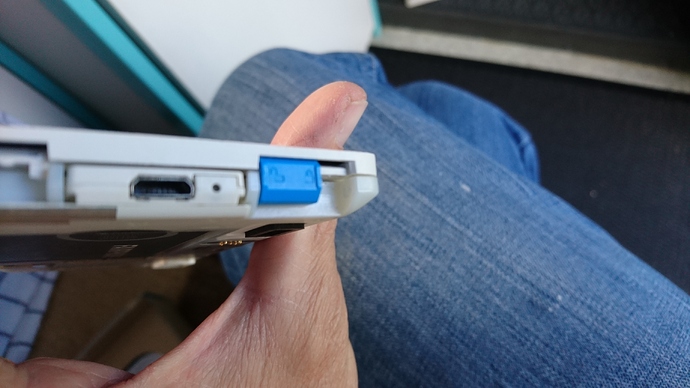 Has this already resulted in sudden crashing or reboots of your FP2s?

FP support line told me that they will not replace the whole core module for a broken bolt as long as its not absolutely necessary.

Come on Fairphone support, really now?
How do you define “absolutely necessary”? Was this customer lucky enough to have the one bolt of the two broken which is only there for decoration?

My assumption is that the blue clips aren’t shouldering the whole “weight”/“responsibility” of holding together the display and the core modules. There are several white hooks near the long edges of the core module, there’s the other blue clip – and there’s the slim case. I cannot estimate which part does how much of the job of holding both modules together, but I tend to think that the blue clips are primarily responsible for just locking the vertical position of both modules against each other (and only secondarily to support their pressing against each other). And also in that respect (vertical position), the slim case plays its part, too.

But I think the decisive question is whether it results in the modules losing mutual contact.

That all makes perfect sense. But why would we have to assume anything anyway? They know. They could explain.
@Dome Did they explain in detail why this broken bolt is not important enough?

Has this already resulted in sudden crashing or reboots of your FP2s?

Nay, the bolt broke in March and my FP2 was just doing fine til the touchscreen problem every other one is writing about appeared. But since I checked with the a fellow FP2 owner by swapping screens, that is not the cause of my problem. And that was the reasoning of support: since the broken bolt doesn’t affect the functionality of my phone, there is no need to replace it. And since I told them about in April already, I’m content with that answer as long as they acknowledge that I did inform them and that any and all follow-up damages to my phone resulting from that missing bolt are NOT MY responsibilty but theirs.

Nonetheless, I very much would like to have a new bolt or something emulating its functionality, hence the request for a 3D-printable solution… as I can totally understand the hesitation to replace a buck load of smart electronics (the core module) because a small dumb plastic bolt broke…

Thanks for all your help, anyone any idea if this idea of mine is feasible?

Mine looks exactly the same but the other one…

You don’t have the broken bolt, do you?
I fixed mine with J-B Weld - a 2 component epoxy adhesive - I glued many things together with it in the past but never such a tiny part but it worked …
Just roll a bit scotch tape to have an adhesive spacer that will holt the bolt (it will take 24 hrs to dry!) in the right position, mix a small amount of adhesive, dip the bolt in it, bring it in the right position on the tape and use a needle to apply some more adhesive around the bottom of the bolt (to give a bit of a ‘base-plate’) then leave it for 24hrs, remove the scotch tape and voila

Well, since I don’t have the broken bolt anymore I cannot do that…

So, any other suggestions?