I have to send my phone in for repair. So I deleted my accounts (for privacy reasons) and now I’m trying to get the phone to start without asking for a PIN code. I went on security options and checked the button and nothing happened!!!

Phone asks my PIN code and again and then nothing… I really have to do this in order to get my phone to repair… because I’m hoping (wishfull thinking yes I know) that they will not factory reset it… (which they will but anyway).

There are two different kind of pin settings, so make sure to look at both:

For Screen Lock the option “none” is pale grey and can’t be activated.

Did you setup VPN? If yes, delete it.

I will as soon as you tell me what it is…

-> /settings/more/VPN
VPN needs a PIN for your locksreen, if set.

Screen Lock the option “none” is pale grey

and the other options? wipe?

I have 2 first options “none” and “wipe” are pale grey 3 other options are available. 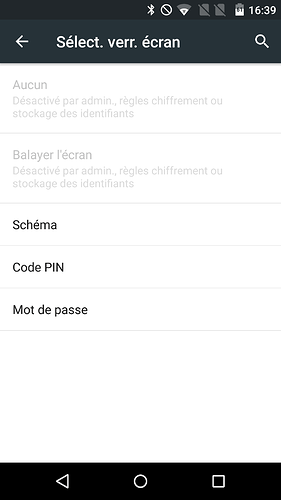 These 2 options are deactivated by an admin - the question is: who is admin? Any app, that is for security-reasons on your phone? Have a look at /settings/security/device-admins 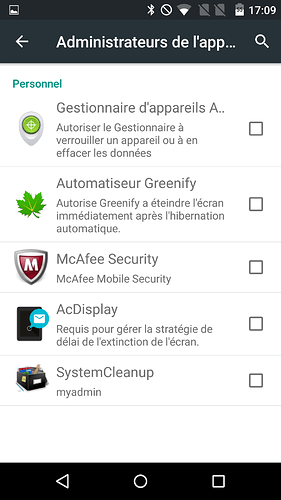 As you can see none is activated…

Activated or not, those apps work and can disable options. I do not speak french, so I#m not a good help in this case.

“ecran” seems to be “lockscreen” and this term appears 2 times in your screenshot:

Acdisplay changes the behaviour of the locked status (thats what I see), so deinstall it.

Greenify has to do with battery …

Is your phone encrypted? If so: As far as I know, it’s not possible to disable screen lock password if your device is encrypted. The options that aren’t compatible with an encrypted device will be grayed out in that case, I don’t know the text that it will display in French, but what you’re seeing is about what I would expect.

I think the logic behind it is that if you have your device encrypted, it should always be password protected. If the phone is unlocked/unprotected when it is on, it would render the encryption useless.

On my FP2 the screen lock cannot be deactivated even though my FP2 is not encrypted.
Since my FP2 was repaired and therefor was hard reseted I had to configure twice by pattern screen lock.
I remember that I could not deactivate it already in january when I received my FP2. After repair in april I checked the same issue. I simply thought this is normal behaviour of android 5 to prevent s.b. to deactivate it in a simple way.
Looking on some answers here I am surprised that deactivating in a simple way should be the normal behaviour and my FP2 also doesnot behave correctly due to this issue.
Unfortunately there exist no traditional kind of manual for FP2. Therefor for me there is no way to find the normal behaviour e.g. for this issue of the FP2
regards

After doing some research on the internet I would confirm that the question “Why can’t I turn PIN lock off on Android” is a common and old issue for several android releases in the past. Answers here have been already given by android device administrators or VPN. Even an email app may request this pin internally and therefor keep this menue blocked. Before all of these dependency may be removed you cannot get back the option to deactivate screen locking. So, I think my suggestion in january and april was right due to internal android password and security dependencies. It makes sense and is no problem but ensures security on the device.

I found a hint that clearing all credentials under settings/security may even enable swipe for screen unlocking.
Because I don’t want to loose all pre-installed credentials I cannot test it. Because it was for sending the FP2 to FP support it would be possible to try out clearance of all credentials . If you see that screen locking by swipe can be re-activated this way it would be helpfull here to know about our research.

I had a encrypted phone and the only thing that helped was to reinstall the os with full phone wipe.
Afterwards the encryption was gone…

I had a encrypted phone and the only thing that helped was to reinstall the os with full phone wipe.