Phone crashing: Can Apps Orange cause this?

When I got my phone about a year ago, right from the start I had problems with the phone freezing and rebooting randomly. The phone did this approx. once a week, and there was no pattern to it. After a while, the problem seemed to mostly disappear after I uninstalled one particular widget. Crashing still happened, but only sometimes.

Fast forward to this day. A few months ago, the battery (or the part above it, the core module I think) started getting extremely hot for no reason, even when the phone was just sitting on a table, not being used or having no apps open. Then, about a month ago, the battery suddenly stopped holding a charge: The phone would get charged only if it was turned off, and then, after the phone was turned on again, the battery lost it’s charge within 2 hours, even though I didn’t even use it at all during that time. This battery problem started completely out of nowhere, and I couldn’t think of any reasons for it: I had not dropped the phone or exposed it to any extreme conditions (heat, cold, moisture), there were no new apps and antivirus app didn’t find any malware.

I thought the battery is broken, so I ordered a new one. I also ordered a new bottom module, because last summer I noticed the primary microphone had broken at some point.

The parts arrived and I installed them with no problem (at least as far as I know), but the problem with the battery persisted. At that point I did a factory reset (should have done it first, sure, but for some reason I was just so sure it wouldn’t help any that I didn’t), and that solved the problem. But it gave me a new/old one: the phone keeps freezing and rebooting itself randomly again. Only that it’s way worse now, for now it happens at least once a day, usually 3+ times a day. And again, the reboots are completely random: they happen both while using the phone (with no pattern, it can happen regardless of what I’m doing) and also while it’s just sitting on my table doing nothing. Though it crashes way more often when it’s being used, while idle it’s crashed only a few times.

I did a new factory reset to remove all apps and data, and didn’t install or recover anything at all after it. I only logged in to my google account. Didn’t help at all.
I changed the battery back to the old one. Didn’t help (but apparently the old battery is still fine indeed).
I changed the bottom module back to the old one, in case the new one is faulty. That solved nothing.
I tried safe mode, but that didn’t have any affect either.
I’ve switched my sim to the other slot, but again, no help.
I don’t have an SD card, and I’ve made sure the on/off button isn’t being pressed by me or the frame.

When I did the first factory reset though, the phone also installed Apps Orange, after which the problem started. I’m pretty sure I didn’t have it before, for I go through my apps (through settings) quite often to uninstall any apps that I haven’t needed enough. The first time I saw Apps Orange was after the first factory reset. And since at this point, that is the only difference left (that I can think of), could it be the cause? Or is my phone just faulty? I’ve tried both force stopping and enabling the app (by default it’s already disabled), but neither had any effect.

My phone is up to date, and so are all of my apps.
In case it’s relevant, I included some screenshots of the phone info. 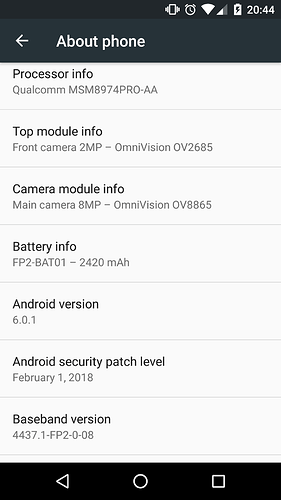 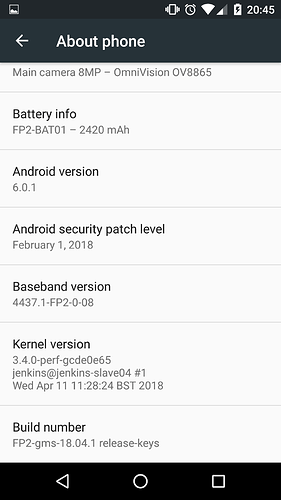 When I did the first factory reset though, the phone also installed Apps Orange

A factory reset on the Fairphone 2 doesn’t install Apps. It removes all user-related data and Apps.

The Orange App was included in an update …

Starting with the release of our August software update Fairphone OS 17.08.1, Orange France offers its Fairphone customers a special operator app called 'Apps Orange'. This app's purpose is to faci...

My phone is up to date

Not quite. Fairphone are currently rolling out Android 7, you should be getting it soon. Check the Updater App regularly … and backup or sync your important data, contacts, etc. to somewhere safe beforehand.

Originally published at: https://www.fairphone.com/en/2018/11/13/investing-in-long-lasting-design-android-7-for-fairphone-2/ Earlier this year we announced that we were working towards getting Android 7 into the hands of Fairphone 2 owners. It’s been a long wait, but we’re happy to say that, after months of hard work on development, Android 7.1.2 ‘Nougat’ will officially be available for the Fairphone 2. The upgrade will be rolled out over the coming weeks, so Fairphone 2 owners should keep …

The first time I saw Apps Orange was after the first factory reset. And since at this point, that is the only difference left (that I can think of), could it be the cause? Or is my phone just faulty?

In general, Apps can cause bad effects.
A notorious example for wreaking havoc on the Fairphone 2 is the official Facebook App.

Whether the Orange App could cause your problems can only be determined by getting rid of it one way or another … perhaps it will be gone after the Android 7 upgrade (I don’t know)?
Or you could try a different OS temporarily … I don’t know whether the Orange App is also part of Fairphone Open OS … but I certainly think that it isn’t included in LineageOS.

Thanks for your reply. I’m going to wait until my phone is updated for now. If that doesn’t change anything I’ll contact the support.