OS update not working, and manual flash installation not working either

After updating on Tuesday (following the prompt from the updater), I get the "unable to find partition for path ‘\system’ " message and get the TWRP.
I have followed the threads and tried the manual installation, as per https://support.fairphone.com/hc/en-us/articles/207914363?flash_digest=6af4dd3e20db05f36402704baddfab402882c281#

But I get the “WARNING: No Fairphone 2 found” message always, even if I followed the steps and use a cable data.

Is my only option a TWRP factory reset? I guess that means choosing ‘wipw’ in the TWRP?
If I do that, besides losing the data, will the FP2 then boot with the functioning OS, or will I then need to do a manual installation, hoping the computer sees my phone?

Thanks for the help! I am travelling today back to Europe, so any quick feedback would be very much appreciated!

I have followed the threads and tried the manual installation

And have you tried to find and install the update in TWRP? …

But I get the “WARNING: No Fairphone 2 found” message always, even if I followed the steps and use a cable data.

Thank you for the tips. Unfortunately neither worked. I tried to find the update in TWRP -> Install -> cache -> But there is nothing there.

And I installed the SDK platform and tried steps 1 and 2 but nothing happens (image below). Anything else left to try? 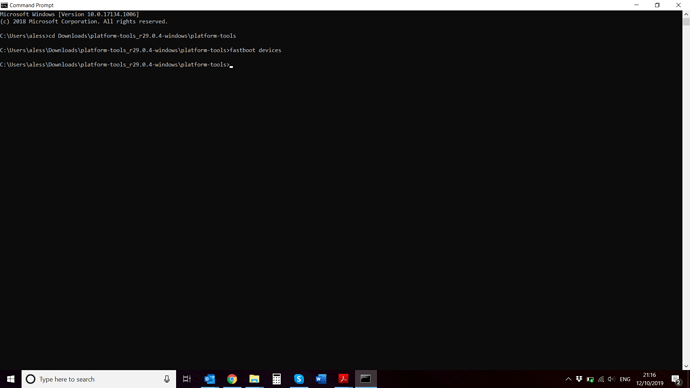 Anything else left to try?

If it’s not the cable, then this looks like driver trouble.
This here was done because MTP didn’t work when TWRP was booted, but it could serve as a generic driver repair …

To get MTP running again, I did the following …

Et voilà … Now the Fairphone 2 with “Internal Storage” and “Micro SD card” shows up again in Explorer as soon as TWRP is booted and the phone is connected via USB. I tried TWRP 3.2.3-0 and 3.3.1-0.

Turns out I deleted my working #dic:adb and #dic:fastboot commands with this endeavour (they were probably from Minimal ADB and Fastboot), so I did the following …