My cover also has split. As glueing it together doesn’t work, I came up with another trick.
I took a piece of paper and glued the two parts on the paper. Now the paper is holding the two parts together. Of course this will only work at places where there is no button. 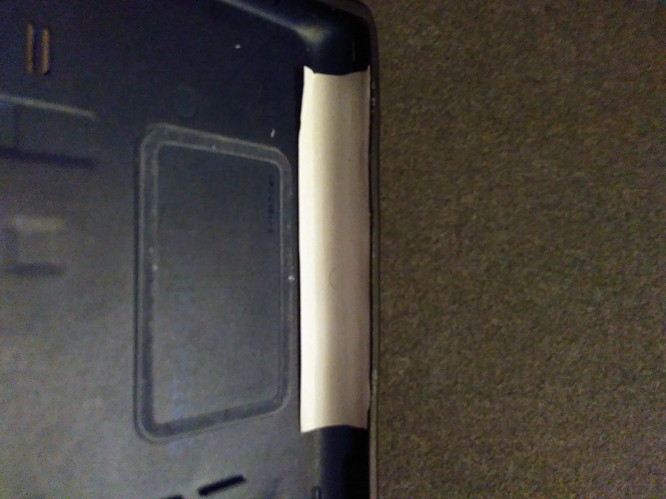 Adding another report. I’ve decided to order one of the new slim cases, instead of trying to get this case replaced. It looks like the new design has resolved the issue of bonding different types of plastic by using separate edge and back parts. 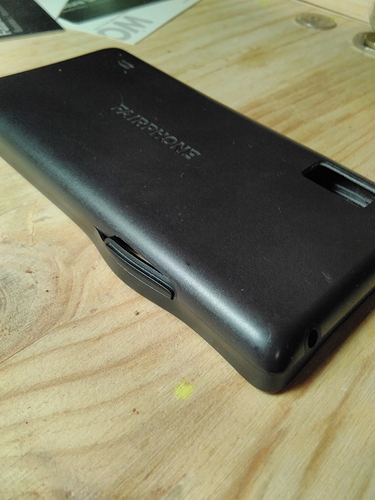 I don’t think this is fair. Having your users to pay ~45€ for fixing a product they could replace with an upgraded design.

As I wrote to the support:

Rubber, flexible design case has failed. It’s not sustainable for the planet to keep producing and shipping them. It is also not respectful with the client to sentence us exclusively to request a new cover every 6 months, average, instead of providing us a path to upgrade to a new slim cover. I’m even inclined to spend a few (more) bucks, but not 30€+ shipping, sorry. I’m not your investor, I have a broken product.

That was my case as well. I mentioned two options in my email to Fairphone back then when my cover was deformed/cracked/split. Either send a replacement, or give a significant discount on a new slim cover if that is made of better quality.

I think it would be fair to give existing users who have issues with the old case the option to upgrade their case with a slim version with discount. I’m fully supporting Fairphone, that’s why I don’t demand the new slim case for free, but a discount would be fair. My new case is still fine, but it already shows slight deformations at the buttons, so my expectation is that in springtime, it will be the same old again.

Yes this happened to me…very disappointed as second problem with this phone. Ive only had the phone less than a year and after a few months the main mic broke…waited months for spare part. That’s fixed but as I had to take the case on and off many times becasueof faults associated to mic and charging problem my case split by the volume button. I don’t want to pay for another one as expensive.
At times I get really frustrated with this phone and I have buyers regret. I hate how it freezes when I use it when it is charging. I find it difficult to talk to people as it often hangs up, puts on hold without me doing anything!

case split by the volume button. I don’t want to pay for another one as expensive. At times I get really frustrated with this phone and I have buyers regret. I hate how it freezes when I use it when it is charging. I find it difficult to talk to people as it often hangs up, puts on hold without me doing anything!

Most of the problems you are describing have solutions. Please use the forum search above (the little magnifying glass) and you’ll surely be able to solve most of the issues.

As for the broken cover: This is on warranty and Fairphone will replace the case for free. You have to contact them via support.

PS.: Okay, I see you don’t have a FP1, but a FP2… I get confused with the change of colour of the #fairphone2help and #fairphone-help categories…

I had the same problem all of you with the 2 covers I used. Today while I was watching my transparency cover, I wondered if there was a reason for the deformation to always start from the same point, and I noticed the SD card slot is just next to the volume button. One possibility is therefore that heat escape from the slot when it is empty (which is my case). So I’d like to ask all of you a question :
If you had this problem, did you have a SD card in your slot?

###When your cover started to deform, did you have a SD card in the SD-card slot?

Thank you so much, I didn’t know how to do that!

This is an interesting observation.
Though, I got these deformations and splits at all buttons. So I think it comes first and in biggest amplitude at the volume button, because it is the biggest and/or is most used.
But this is also just a theory

I also get the same problem, split in the cover module. I send the email to the support team to see what they propose to do.

I have the same feeling than you.

My cover has been replaced once at the end of last year.
It seems like the deformations appear since tree/four weeks.

I don’t want to ask a new replacement to the support and I’d prefer buy the slim version.
So is it possible to have a discount or something for us?

If you want an official answer from the Fairphone Team, you should contact them directly via Sup
port.
This is a community forum, populated by Fairphone users like you and me.

It is sad to see that some Fairphone enthusiasts are talking about becoming fed-up with Fairphone just because they have encountered a problem with the case. Did you think that high ideals make one immune from any error? Of course not: idealists can make mistakes at least as easily as anyone else. The difference is that idealists try their best to put matters right. I had a case replaced free even though I’d had my Fairphone 2 more than a year, and I am confident that if the design can be improved it will be improved.
All human endeavour involves error, nobody is perfect. If ideals are worth anything at all, they must be able to deal with this fact.

yesterday the cover of my FP2 has got broken. You can see in the 2 pictures below.

Anyone had the same problem? my FP2 is only one year old: how long is the warranty?

Contact Support, you will get a new cover under warranty (2 years for the whole Fairphone except for the battery which has just 1 year warranty). However, you will probably not get the same colour anymore.

thanks a lot for the very super quick reply!

How can I get access to the warranty support? is there a form to use for open a ticket?

If the form does not work, you can also e-mail support@fairphone.com

Sorry, I didn’t realised about the link before

However, the form asks me the “Module unique identifier (serial number)”: I have opened the FP2 and on the backcover is printed “FP2-C1BL1-1”. But it is not good to proceed with the form…

Probably you need to enter the IMEI1 number, you can find this on the long edge of the phone when the cover is open iirc.