No sound when casting

Hello. I can’t get casting sound to work with my TV. I can cast my screen but the sound is stuck in my phone. I have a FP2, so does my wife, and hers is working fine with our TV. Is this due to some volume control in my phone? I have changed the volume on the phone and TV separately without positive result.
However, if I use the youtube app and cast this to the TV, both video and sound are cast to the TV.
Any ideas?

As the issue seems to come from a difference between the phones, that’s the point where I would start investigating:

Thank you @BeMiGro for suggestions, however the problem persists and my wife’s Fairphone has now broken down. I have no idea how to solve the problem with my phone but my guess is that since youtube is able to cast the problem should be in the phone’s casting system. Guess it is miracast but not sure. Any and all help is greatly appreciated.

This is a known FP2 bug, introduced with the Android 7 upgrade:
https://bugtracker.fairphone.com/project/fairphone-android-7/issue/27
You might want to upvote it, but since it has been reported 14+ months ago and they have to deal with multiple, far more serious bugs… Well.

Thank you very much! Will try and hope (in despair?)

Miracast (with audio) works in the latest LineageOS 16 builds, so you might consider switching (if this feature is essential to you).

Here on Android 6 casting by WiFi works fine with a Sony KDLxxx SmartTV (only slight audio stuttering depending background load).

But by a random I stumbled over this method to take over control of (any) android device without additional hardware, software (app) or even rooting of the phone.

It’s possible with Linux and also other OSes.

For me it comes in quite handy specifically because I’m on Linux and this nice game used to work well with casting over WiFi to a smartTV until the last update. Now it more often connects to the cloud which always required to quit casting until the additional data was transferred as casting and network access simultaneously did not work. The game then always brought up a connection error.
Once in a while between game sections going through this procedure was acceptable, but now every few minutes it simply spoils the fun.
As I have summed up lots of credits meanwhile being bound to this device, switching to an Android emulator or a different device (even with imei spoofing) does not work.

It took me some time to get all this installed reading through all these web pages: 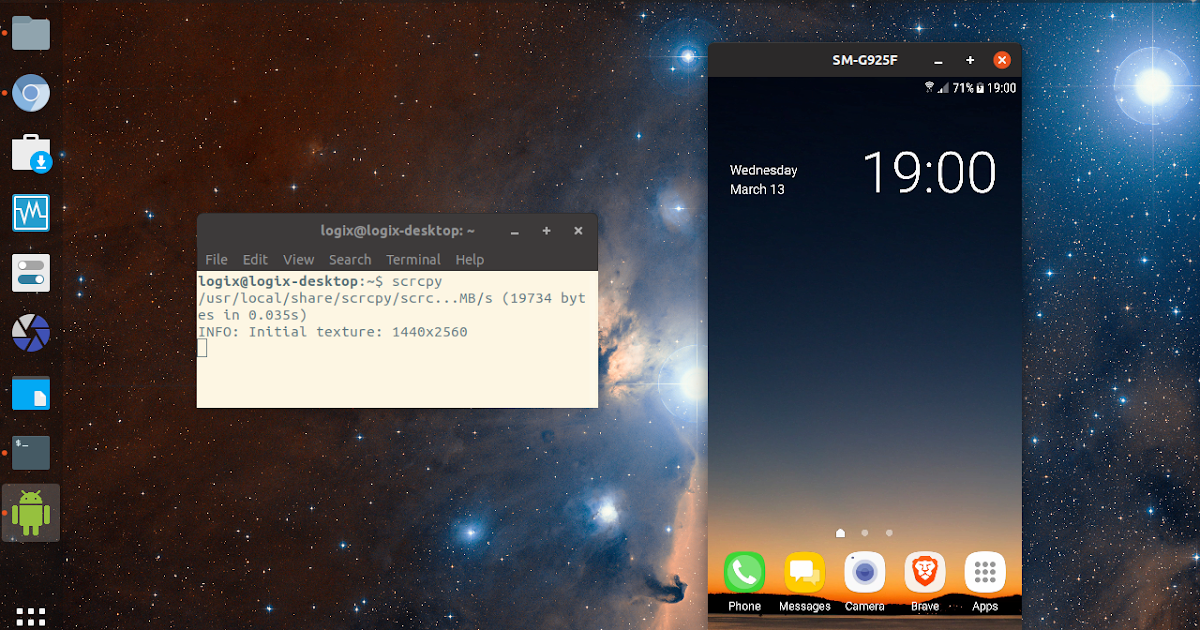 scrcpy is a free and open source application to display and control Android devices connected via USB (or wirelessly, but with lower performance) from a Linux, Windows or macOS desktop.

Due to broken dependencies I had to take the long way:
http://www.linuxfromscratch.org/blfs/view/svn/multimedia/sdl2.html

To finally get it going maybe some useful information:
https://developer.android.com/studio/command-line/adb 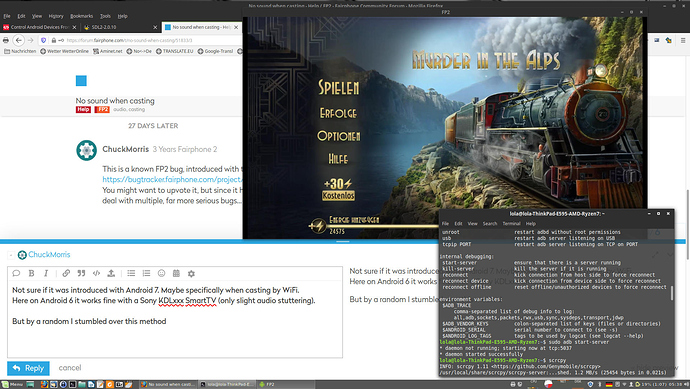 I could not notice any lag. When playing back a video a/v were still in sync. But as the audio isn’t transferred another way has to be used. Using my Logitech BT adapter brought a slight delay of ~0.25s which in this case could easily be compensated with the synchronization option of MXPlayer.
But still the headphone socket is available for use which probably won’t cause any delay.