The fairphone tells me after update it is not supporting SMS anymore!!
I just cannot believe this should be true.
all sms messages gone, i definetely do not want to use android messages. Is there anyone to help about this issue?

Please be a bit more specific so that people can help you:

The fairphone tells me after update it is not supporting SMS anymore!!

How does it do that? What is the error message exactly? Can you make a screenshot of the error (press Power + Volume down simultaneously) and upload it here?

What OS are you on now? You can see that in Settings - About phone - Build number.

I just cannot believe this should be true.

It isn’t true, of course, probably there’s some configuration glitch that has to be fixed.

Just in case: Do you have a backup, or do you sync your messages somewhere online?

i definetely do not want to use android messages

Android Messages is just Google’s SMS App, there are alternatives to that. Or do you mean something else?

Some generic approach without knowing more detail: You could ask your provider for the number of their SMS Center (SMSC). You can then check (or update) that number in the settings of some SMS Apps.
If not in the SMS App settings, you can enter that in the test menu you should get when dialing *#*#4636#*#* - Phone info - SMSC.

Hey there! Thank you for reaction!
The text is: 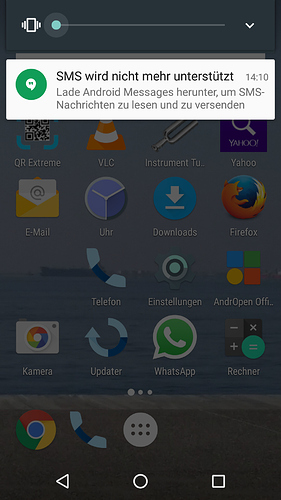 I assume from the error message you have the “normal” Fairphone OS with Google services, not Fairphone Open OS without Google services.
17.04.8 updated your phone from Android 5 to Android 6. It seems there’s no SMS App installed now. Two options:

If you have an SMS App again, you can check whether the messages are still there. At the moment without an SMS App you may just have no way to access them.

You don’t want to do that just because there’s no SMS App installed, that would be “mit Kanonen auf Spatzen schießen” ;-). Just install SMS Messaging (AOSP) for now.

I just mentioned Fairphone Open OS to point out that SMS Messaging (AOSP) is no obscure App by some obscure vendor, it is the stock SMS App of the open source variant of Android, so there’s nothing to be afraid of ;-).
Installing Fairphone Open OS will remove your data from the phone, so you would need something to backup or sync your data before that anyway. In case you’re interested in it later, here’s how you install it.

How big are the disadvantage of Fairphone open? i was interested in that anyway actually…

You are using a smartphone. I hate to break this to you, but before updating you already used an App to write messages just fine. It was called “SMS” and was preinstalled, and it is just uninstalled now because Google chose to switch to the “Android Messages” App when updating to Android 6.

How big are the disadvantage of Fairphone open?

Important thought I have just now (sorry): If you used Fairphone OS with Google services until now and didn’t explicitly turn off syncing your data with Google, your messages might be synced already with Google now (even without you realising).
Installing Fairphone Open OS without Google services might be counterproductive in this case, because without you doing anything about that it gives you no means to resync with Google from the start and get your messages back the easy way.

So really, don’t install Fairphone Open OS now. Just install the SMS App I linked to and check whether your messages come back to life.
If that doesn’t help, install Android Messages like the OS already suggested.

Disadvantages of Fairphone Open OS depend on what you use your phone for and how much you want to have to do with Google.
You are using Google’s Android OS anyway, but Open OS comes with a lot less preinstalled Google Apps and services. You have the choice to try to get around without them (you need an alternative App Store like F-Droid, perhaps you need an alternative exact location provider if you want more than GPS, and so on and so on … see also microG),
or you have the choice to install them again (with several different packages ranging from the bare minimum to get the Play Store running up to everything that would come with the normal OS, too), more info on that: Open GApps.

Basically the advantage of Fairphone Open OS is that it gives you more of a say in what is on your phone and what is not. The disadvantage is you have to put in more of an effort yourself.

- i mean an app that is not google associated… SMS Messaging is not accepted too.
well, getting more curios on installing open os. thanks anyway

On the current Fairphone OS version, the SMS app works fine. The SMS app is really messages, installed via the Play Store, i verified this on my phone. Simply go to https://play.google.com/store/apps/details?id=com.google.android.apps.messaging , and install the app it’s the default SMS app on Android now.

Well, that sounds a little bit too paranoid considering you are using Android (by Google) ;-).

However, you have chosen the right phone for any amount of Google paranoia, see Living without Google 2.0 - A Google free FP2.

If you’re willing to experiment, you could even install other OSes than Android on the Fairphone 2, see #oslist.
I tried Sailfish OS alpha 3 myself some months ago, it ran totally fine already, and it is at alpha 4 (see Changelog here) currently, so probably even better.
Ubuntu Touch is starting to seem worth a try now, too.

- i mean an app that is not google associated… SMS Messaging is not accepted too.

AOSP is fine to use, it is open-source and can be checked to contain no unwanted Google stuff. If you are using your Fairphone without Google, you’ll still be using AOSP. So please install this app, your SMS messages will be there. Afterwards you can consider moving to a phone without Google.