No internet while call on SIM CARD2

I have a strange problem here. When I have a call with SIM CARD1 then I’m able to send Whatsapp and/or access internet. If I have a call on SIM CARD2 then the internet connection is broken … I checked the APN settings on both SimCards/Providers are correct.

Anyone has also this problem or anyone knows how to solve this? In SIMCARD2 is my work number and sometimes phone calls are very boring …

From which operators are both SIM cards?

It is possible that one of them can’t do voice over LTE which means the 4G connection drops to 3G when making a phone call. And if you are in an area with bad 3G signal this could mean that your internet connection drops.

Could it be a technical limitation? Some Dual-SIM phones are disconnecting the SIM card when there is an active call via 2G/3G on the other one.

@AlbertJP: Both SIM CARDS are from the same provider.

and we have a full signal strenght shown.

Both SIM CARDS are from the same provider.

and we have a full signal strenght shown.

Ok, but do you mind sharing which one so we can check whether or not it uses VoLTE?

Also, which of the two SIMs is your default data SIM?

we use swisscom (switzerland) here … and the first one is my default SIM.

There is only 1 sim that can have the data connection on a Fairphone 3.
So if you have set the data to sim 1, then sim 2 doesn’t get data.
If you want data on sim 2, then you have to switch the data from sim 1 to sim 2.

Hm … can you explain me this a bit deeper??
Why disconnects the FP3 my data connection which is always set to SIM1 when I use SIM2 for simple calls (not whatsapp or internet calls) This makes no sense to me …

Could it be a technical limitation? Some Dual-SIM phones are disconnecting the SIM card when there is an active call via 2G/3G on the other one.

Perhaps this also happens on the Fairphone 3.

As far as my understanding goes, Dual SIM Dual Standby devices (such as the FP3) will drop the connection for a SIM when the other SIM is in an active call due to hardware limitations. There may be some cases where a 2G fall-back is possible, but I don’t know whether this applies to the FP3 (you’d need to have the call on a SIM that is set to use a 2G network and then test if the 3G/4G SIM maintains a data connection). Note that as the connection for the inactive SIM is normally dropped during calls, you will also be unable to receive calls on the idle SIM.

Simultaneous mobile data and calls on the same SIM should be possible with VoLTE, but not across two SIMs as far as I know.

Dual SIM Dual Standby devices (such as the FP3)

Yep, I fully agree as far as I know the hardware design of FP2/3.
Most mobiles are made this way, but of course there are others available too.

I found this very interesting read about the differences and a work around for not missing calls when one SIM card is actively in use for calling.

As the phone has only one transceiver built in (DSDS specification

I wondered about this behavior too just some weeks ago and thought at first my phone was malfunctioning as I did not put any focus on this behavior up to then. When phoning I prefer to concentrate on my calling partner not necessarily doing other things with my phone.

But I found a simple work around if internet connectivity anyway was needed, using wifi if available should help here.

Generally spoken it is funny that even the chipset of FP2 is capable of being designed for a DSDA mobile. 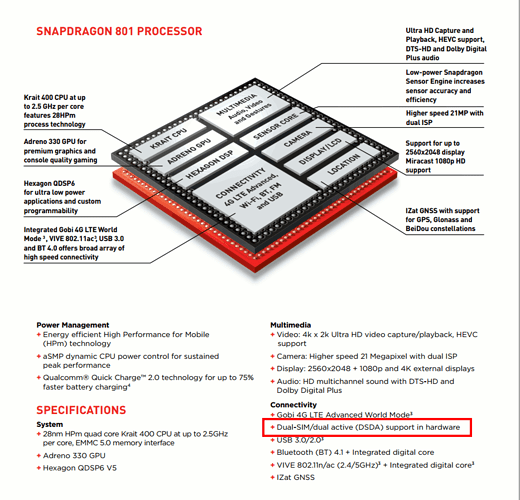 and the one in FP3 could be DSDV.

But as mentioned in the read most (big) manufacturers don’t want this and there would be a slightly more expensive design and maintenance needed.

Generally spoken it is funny that even the chipset of FP2 is capable of being designed for a DSDA mobile.

The FP2 has a different limitation - using 2G only on one SIM. This means it can support dual SIM with a single LTE transceiver, which makes things much less complicated. I find it very plausible that it can do calling and data at the same time because the network standards of the two SIMs have to be different, also because I do not recall any similar complaints from FP2 users. DSDA phones with one SIM on 2G only, seem to have been pretty common some years ago.

VoLTE seems to be complicated to get right - the FP2 had the hardware (to do it on one SIM) but not the software support. I imagine dual VoLTE requires quite some programming & testing which Fairphone may not be able to do for a small minority.

Thanks very much for the explanation - now I know why.

In the meantime I did a workaround and joined the WLAN on this location.

So I can make data work while on the phone?

4 posts were split to a new topic: How to add a text displayed next to the user name in the forum

Isn’t it rather made in a DSDV mode as stated in the original tech spec sheet as I pointed out some days ago?

Good to know anyway that you have found a workaround for you. I am curious if other Dual-Sim users here can get it done as well.
VoLTE as I know is not generally available/enabled by every carrier.

Can anyone else have a try on this? I think I’m not the only one curious about it.