Hello,
I’m a Fairphone 2 user, and, you know, I’m this kind of people who use a lot Emojis (emoticons, smileys, idk how you call them).
I downloaded, when I bought the Fairphone, the Gboard app to use Emojis (we have to, they’re not in the standard android keyboard). But since like 2 months, I can now see the new Google Emojis (the round ones, not the Bob ones) but when I click on one of those, it appears on the screen like the old ones. I know I’m not clear, so here’s a screenshot: 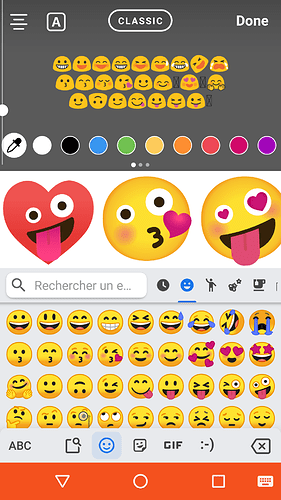 If you already use TWRP or another recovery capable of installing zip files, you only have to download a flashable zip with emoji, boot into recovery and then install the zip. If you don’t have a custom recovery installed, follow the steps below.

Edit: changed link to zip to the one available from the WeAreFairphone github

you only have to download a flashable zip with emoji

Index of Flashable ZIPs by the WeAreFairphone Community Development

There’s a clone of this post in https://wearefairphone.github.io/flashable-zips but this post will include status updates and references to posts and threads on this forum. This is an index of community flashable ZIPs (#dic:flash) from the Fairphone Community for a variety of devices. Flashable ZIPs are packages that can be flashed to Android devices, usually to modify the software. They need to be flashed by a custom recovery such as TWRP or CWM Recovery (#dic:recoverymode). Index of flash…

As far as I can tell (and I admittedly haven’t looked into it too deeply), that version of the Noto emoji set is out of date. The WAFP github does have the newest version available for download, but the user has to build it themselves - something I considered adding as an additional step, but considered to be too fiddly for the average user.

Edit: looks like a certain someone has just updated the readymade flashable zip - I’ll update the link in the original post.

Looks like the one who forgot something first was me, indeed… I updated the code and tested it some time ago, but I didn’t push upstream that release, hahaha,

. As you noted, I did after replying. Excuse my past self there.

Let’s forget all these!