My FP2: 6 years and counting

I bought my FP2 in 2017 as a New Life edition.
Currently, it’s a bit sluggish and crashes often, but it’s my main driver.

The day has finally come it seems. After 6 years and a few months I’ve finally retired my FP2. Having switched carriers to one that offers eSIM meant I can start using my FP4 dual-sim like I used to with my FP2, removing the use I had for the FP2. From now on it’s demoted to a back-up as I look forward to using my FP4 for the next 6 years. So long FP2, and thanks for all the fish!

If this would not be due to a hardware fault or a specific App which can’t be dropped, it should be fixable.

At the risk of telling a bit much, but at the July Düsseldorf meetup, he said his FP2 “still” had a generous 600 MB free storage space …

(Yes, we strongly suggested to free up a lot more

just stumbled over my invoice and noticed my FP2 will turn 6 in 11 days. Its no longer my daily driver and still helps as a test device and for troubleshooting

It turned out that Duolingo consumed 3GB for some reason and with a bit more free space, it’s better (but the crashes are not gone).

but the crashes are not gone

Could you grant me the badge, please?
Might be the last year though… Apps tend to freeze and I don’t want to go back to Android 7, when things were better! Still using the phone and enjoying the view while the apps close and reopen, but it will be hard not to be tempted by Fairphone’s cashback promotion!

I bought my FP2 in May 2016. I wanted to reach 7 years but it’s gona be difficult as I am now facing a lot of random reboots. It even suddenly completely shuts down and then becomes hard to switch on again… Let’s see. I’ll try to fix this!

Are you safe to do a factory reset ??

Six years for me too

What an incredible product!

Six years and a couple of months now for my FP2.
Since update to Android 9, slightly less happy than earlier:

but nothing too serious.
Bought a new battery just recently, but haven’t replaced the original one yet: 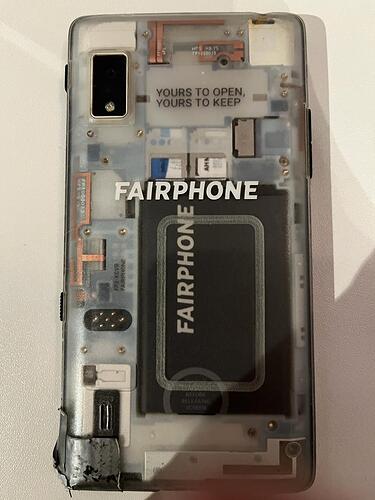 6 years for me as well now. Still happy. The housing has some damages at the edges by now, that’s all. Looking forward to the 7th year.

Almost forgot about that: My FP2 has arrived sometime in begin or mid of December 2016 and has been with me since then on most of my ways.
The housing has the obligatory broken edges, it’s running on the third battery, second display (the first one developed irresponsive lines…) and the first bottom module. It has seen almost all versions of FPOS with a longer break in between when we were at Lineage OS. Lately I got some more spontaneous reboots unfortunately, but maybe there’s still something I can do with disassembling, cleaning and assembling back together. I’m looking forward to the FP5 as this might be realistic to reach until there without too many headaches about the specifics of an old phone

A post was merged into an existing topic: My FP2: 5 years and counting

I think I have owned my FP2 since March 2012, so am getting closer and closer to the six-year mark… I have been through one factory reset (last year, due to the December 2021 Cataclysm - see FP2 reboots and home screen issues), and I replaced the camera module a few years ago. A few weeks ago the phone became unstable again, so I might need to go for another reset (sigh) and/or update the OS (which I haven’t done for a while). Eventually I may decide to buy a new phone, but I’d like to see if I can rescue my FP2 once more! So far, it’s been a good FP experience - and this forum is an amazing source of knowledge

Seems you are getting closer to a 10 year mark

The Fairphone 2 is a touchscreen-based, dual-SIM smartphone designed to be easily repaired by the user. First released in December 2015, it was the first modular smartphone available for purchase and has since received both hardware improvements and major software updates, initially shipping with Android 5 "Lollipop" and running Android 10 "Queen Cake" as of November 2021. Production ceased in 2018. It is the second phone from the social enterprise Fairphone and the first one completely design...

Lately I got some more spontaneous reboots unfortunately, but maybe there’s still something I can do with disassembling, cleaning and assembling back together.

Just for the record: Nope, that didn’t help. I have taken it completely apart (in terms of modules) and cleaned all the contacts, also on the backside of the display. But it keeps rebooting from time to time (which however solves the issue with mobile data not working), mainly when using it, but also sometimes just when lying around.