Missing warning when setting the alarm clock in silent mode

Of course, a) is way better than b).
But I definitely don’t want to miss my early dates/flights again due to this problem!!!

Sidenote:
After I didn’t wake up for the third time and almost missed a flight, it’s definitely time for this bug report.
Please, please, fix!!!
Of course, the even better fix is to introduce a mode where everything is silent except alarms
(it feels so stupid to ask for that feature because every normal guy would consider
it to be a bug that an alarm clock doesn’t ring (because that’s its only prupose),
but I gave up to understand blind Google techies…)

But it does warn you. Have a look at the screenshot, it clearly says that there are no alarms. 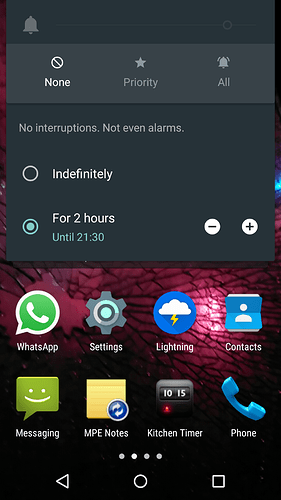 I would suggest you to edit your notification priority settings. You could set all apps to normal and only the clock app to priority.

Do you know an other Android device, which has this “feature”?
If it’s not an Android-feature, you’ll most propably never get it.

For me, it’s clear, that “no interruption” means nothing interrupts me, even no alarm.
I use this mode only during meetings, normally I use the “priority”-setting, where you hear alarms.
Maybe you just need to get accustomed using these modes

Thus, the warning should come the moment I set the alarm clock,
because it is useful to inform users that an alarm just set doesn’t work…

The point HERE is that users don’t get any feedback, that setting the alarm clock doesn’t have the desired effect.
I consider that to be a bug (unless you don’t accept bugs for not letting users fall into traps and pitfalls).

Well, it’s clearly not a bug, maybe a missing feature.

But the icon in in the status bar (crossed out circle) shows you that you’re in silence mode. So even if you forgot it, as soon as you take your phone to set the alarm, you’ll see it.

Android doesn’t know during setting an alarm, that you plan to stay on silence mode.

So it’s clearly no bug report, but a feature request!

Irina, yes you are right, you can see it and you can know it,
if you carefully look and know what you are doing.
The whole problem is that

Are you saying that you don’t want the intuitive behavior here?
Even technical experts like me fall into these problems more than once.
Missing airplanes is no fun and it is pretty easy to fix this.

Reminds me on this old saying by Bjarne Stroustup.
Being asked what of his expectations were fulfilled in the past 10 years, he said:

I assumed in 10 years using a computer will be as easy as using a telephone.
I was right, but unfurtunately the other way round.

Are we now in a phase that setting an alarm clock is something only possible for computer nerds…? And do we even consider this to be OK?
Nonintuitive unexpected behavior for obvious tasks IS a bug.

and it’s even worse.
In the above scenario the feedback is:
“the alam rings in … minutes” (“der wecker klingelt in … Minuten”)
which is simply a lie.

So then do a “bug” report at Google. It’s clearly an Android “issue”, and I think Fairphone doesn’t have the manpower to do modifications on Android.

In addition to that, modifications do handicap the process of porting a new Android version to FP2 - and no one wants that! (?)

I think this notification priority feature of the new Android OS is quite an improvement, because every single user is able to configure it the way he or she wants/needs it.
And its no that complicated. Configure the priority mode according to your needs and just never use the dangerous silent mode again.

It I had put the phone in silent mode, I expect a silent phone. So, no alarms. I guess the description of “intuitive behaviour” depends on what you want.

So, once again: This bug is not about changing the behavior, that an alarm should ring in silent mode. It is to give users the feedback that setting an alarm clock does not have the effect they expect.

I’m sorry, but I would just find that a very annoying message. If I put my phone in silent mode, I know very well that setting an alarm clock would give a “silent” alarm. That’s the clue of a silent mode.
I get it, you want a warning when you set the alarm. But I would expect that, if you set an alarm when the phone is in silent mode, you don’t expect the phone to make sound if you forget to turn the sound back on. The silent mode is very well indicated, so I don’t see why you would need an extra warning…

And of course, as @retsifp already said: this is not a bug. It is clearly intended behaviour. You are making a feature request (the feature being “I want an extra warning message”). Nothing wrong with that, but maybe you can do it in the topic that already exists for these kind of requests?