Hi
I brought my FP2 to my local repair shop after some water damage. The phone was working apart from the touchscreen. When I got it back it was dead. Now it won’t even react when I plug it in. I removed the screen and noticed one screw was missing from the bottom part and a round screw is also missing (one of the two underneath the “tantalum tin” bit). Before I take it back, could this be the reason why it won’t start anymore?
Thanks 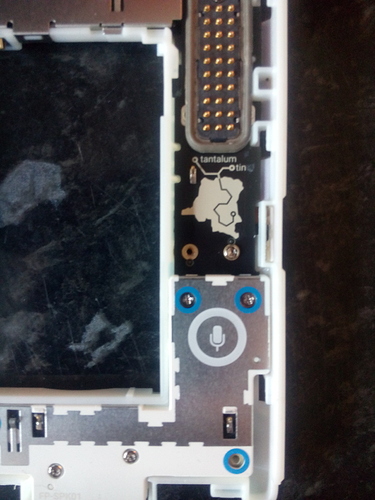 Personally, I think it is far more likely that it won’t start due to water damage (which isn’t always immediately obvious - corrosion continues even after most of the water is gone.) than due to a missing screw.

That being said, there’s still a small chance that the absence of the round screw is messing up the contacts with the expansion port (which is what those screws appear to be holding in place - see the iFixit teardown). If there is a problem with the connection, I’m not sure whether that would stop the entire phone from starting, or whether it would just affect the expansion port.
The bottom module screw is only problematic if it disrupts the contacts between the bottom module and the rest of the phone. As the two nearest the connector are in place, this probably isn’t the case.

Just my 2 cents. Take it up with the repair shop anyway (unless they’ve already told you it is beyond repair).