Could someone try something similar please?

I installed IceCatMobile and tried to copy my user profile from Firefox (/data/data/org.Mozilla.Firefox/files/Mozilla.*.default). Neither in Amaze, nor in Open Explorer Beta I could delete or copy-paste files into those directories.

Both apps had SU access though. Maybe there is some problem with permissions. I’d like to ask if someone could confirm the behaviour?

@Stefan, have you tried in a shell? There is the possibility that it gives you a more detailed insight into what is going wrong.

Oh, I assumed it works in a shell, but it’s not very user-friendly. I was rather hoping that someone confirmed a malfunction with apps and move/remove commands.

Will try in terminal emulator.

Edit: oops I don’t really know how to mv a directory…

Edit: oops I don’t really know how to mv a directory…

No different from single files:

where <dest> is either a new name or an existing directory to move to.

I got the error message <source> is a directory 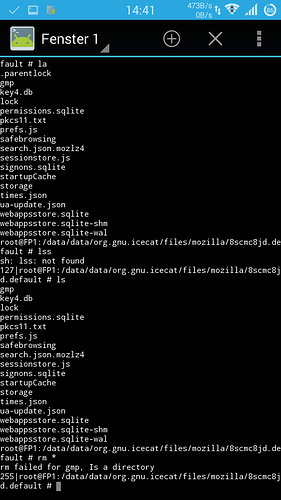 rm probably will work if you do ‘rm -r’ (-r instructs it to be recursive). But take care specifying what to remove, as you can wipe your entire filesystem. I don’t think you’d normally need to instruct mv to be recursive though…

The following is just from the top of my head. What you have to do is probably something like this:

Verify that the source directory exist:

Verify that the destination directory exists:

This was the moving part. Now you probably need to rename the random number part in Mozilla.*.default to match the profile in IceCat (or the other way round: Change IceCat configuration to include a project with the matching random number).

You probably also need to change ownership of the files in /data/data/org.gnu.icecat/files/mozilla/Mozilla.*.default. In Android, all apps have their very own user id. All data belonging to one app is owned by that user. Firefox and IcaCat have very likely different user ids. Check with ls -l and adjust with chown.

Thank you, I followed all your advice and could copy and remove folders. (Amaze 3.0.1 and 3.1.1 both are somewhat broken.)

Still IceCatMobile crashes / closes when I copy the whole profile folder or doesn’t restore anything when I only copy some files. Firefox Sync is broken in IceCatMobile, so that doesn’t work either. I’ve run out of ideas… (Especially the browsing history and reading list would be valuable to me.)

Still IceCatMobile crashes / closes when I copy the whole profile folder or doesn’t restore anything when I only copy some files. Firefox Sync is broken in IceCatMobile, so that doesn’t work either. I’ve run out of ideas… (Especially the browsing history and reading list would be valuable to me.)

Actually, I think that might be off-topic, so I’d rather wrap-up that discussion (or move it elsewhere). One last note: Have you tried the CopyProfile addon?

The factory mode is entirely in Chinese after the update. Before, all labels were in English and Chinese.

Thank you, that doesn’t work either. Icecatmobile still crashes, after I transfer that profile data to the appropriate folder.