We’re on a journey to change the electronics industry – and we’re not alone. While the Fairphone is a physical expression of the possibility of change, it also happens to be a great storytelling device that connects us with inspiring changemakers from all over.

In this series, we want to shine a light on our ambassadors: A group of bright individuals that share our vision of a fairer future and contribute to sustainable change in their own meaningful way. Today we talk to Sander de Kramer, who is shining a light on the exploitation of children working in the diamond mines in Sierra-Leone. 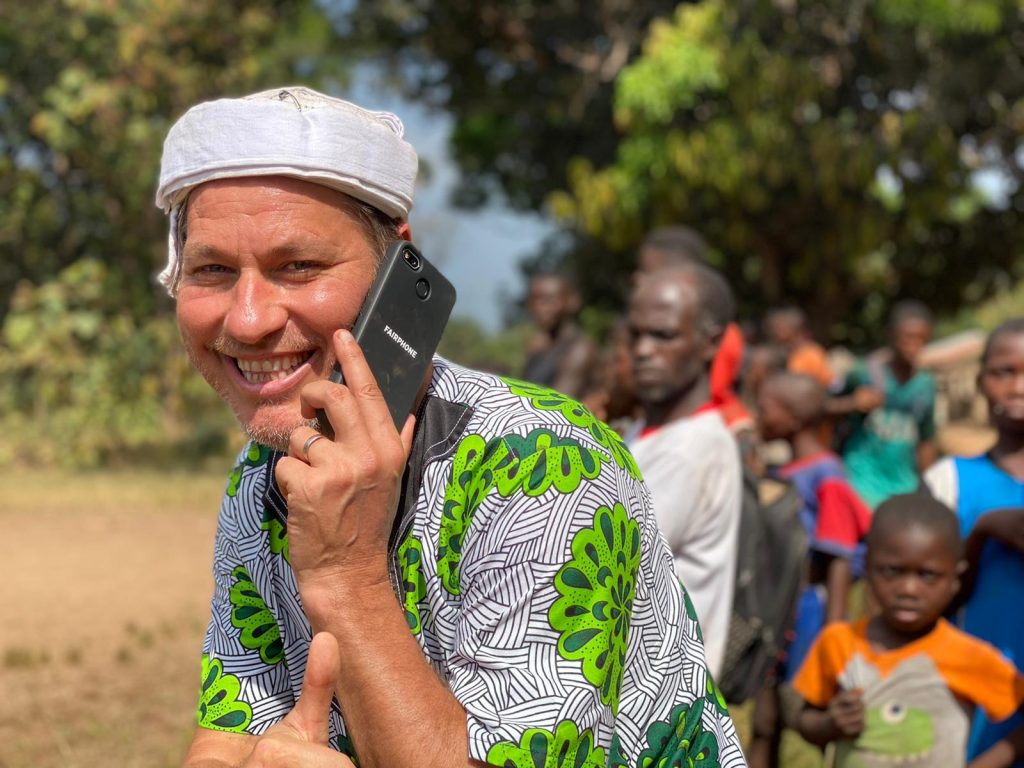 Sander, great to have you here today! Tell us a little bit about yourself.

I’m Sander – a journalist, writer, TV host and social activist from Rotterdam. Thanks to my career, I have been fortunate enough to travel to many far-flung places. Sierra Leone was one of the places which changed my future. In 2007, I travelled there for the first time as a journalist to report on the significant and damaging consequences of the country’s civil war. What I saw was chaos – everything was in ruins and destroyed – the buildings, roads, everything. But what really crushed my heart was witnessing children at the young age of 4-5-6 years old, after losing their parents during the conflict, being recruited by illegal diamond traders and forced to work as slaves in the mines, for as little as 10 cents a day. I decided I needed to act.

So with the help of the traditional leaders of the country, district chiefs, and the local community, we got these children out of the mines and built about 30 schools for the most vulnerable. From this, I founded, with Hugo Borst, the Sunday Foundation, which works with underprivileged children in Sierra Leone. This, of course, is the short version. There is much more to this story.

How did you first learn about Fairphone?

I read about it in the newspaper and it immediately got my attention. During my time in Sierra Leone, the child labor that I witnessed in the diamond mines and the paradox of how much this stone is worth in Europe and in other parts of the world, gave me an awakening – children, orphans, who are very poor and are forced to work in life threatening conditions dig for this stone, for us.

When I saw what Fairphone does, I thought – wow this is a really cool alternative to the companies that don’t yet take a responsible attitude toward their impact! I saw its potential in addressing issues such as child slavery in cobalt & coltan mining in the Congo –the precious minerals used in mobile phones and other technologies – and these children are being exploited and used to keep a system going that isn’t right.

These young children, who should be in school, are often worked to death, digging up the materials to make a telephone, and we, quite literally, buy into it. These children are being exploited by big telecom producers. So when I saw this phone I instantly got in touch with the Fairphone team.

Yes, I remember when you reached out to us! Another problem is that people are just not aware that their phone is made from child labor.

True – they either don’t know or they don’t want to know and that’s the problem. I think almost everyone has read it in the paper or seen it on television, but they just push it away. They switch off the television or look the other way. You don’t solve big problems in the world by looking the other direction. You have to face it and ask yourself, ‘what can I do, what is my responsibility and within my power to make a difference’. If we don’t ask questions, we will continue to purchase products with blinders on and the cycle of child exploitation keeps going.

Was there a turning point or a starting point when you began to act more sustainability?

What’s something you’re super passionate about?

As you might have guessed, I’m super passionate about education. Children are the innocent ones and in places like Sierra Leone they are sometimes part of a bigger system, like child labor, which they cannot change. Change is not in their hands. It’s in the hands of many people, but not theirs.

All children should have the right to go to school, to develop themselves and have the opportunity to reach their highest potential and not be forced into slave labor. This really touches me. When I saw those children digging for diamonds I actually thought that if I’m going to die, I’m going to die by at least doing everything in my power to get them out of the mines and into school.

It’s exciting because the first group we got out of the mines, the oldest group, is now going to university. So instead of digging themselves to death, they now have the opportunity to make a decision about what they want to become and their future is back in their hands.

How Does Fairphone and/or the Fairphone 3 help you do what you do?

Fairphone is the change I wish to see in the world. It is a great example of a good company, producing good and ethical products that help the world rather than being a part of the problem.

We all have the opportunity to choose products that have a positive and sustainable impact on the world, on humanity. I am in a unique position to tell everyone about Fairphone as I’m often on the radio, where I slip it into the conversation.

It’s an amazing phone, I love it! It has the right weight and the right size. But what I really love is that it gives me the chance to do good and still use a telephone.

This is the 21st century and we all need phones in order to work and stay connected with family and friends. But the difference now is we have a choice: continue being a part of a system that plays a huge role in the exploitation of children or choose to be a part of a system that is fair and just. I choose the latter – everytime I make a call with my Fairphone I have a good feeling. When I look at the back of the phone, it says “change is in your hands” and it reminds me of all the good initiatives – fair materials, better working conditions and it makes me proud to be part of Fairphone. I’m a Fairphone Ambassador and that gives me a wonderful feeling.

For more on Sander, and our other Fairphone Ambassadors, stay tuned to this blog or head on over to our community page.