Since the last couple of updates I started feeling the battery was draining at a faster rate. For example during the night without using the phone it’s dropping about 20% and when I check the details it seems to be the microG Core service that is taking the most of it. even after some hours of usage the % of the microG Core is comparable to the screen!

Hmm… I can’t approve that, in my case microG is at 1% battery usage (since yesterday morning).
Did you happen to install additional apps (or app updates) that might explain the increased microG usage?

Mm no new apps. But yes i did several updates. Hard to figure out what could be… 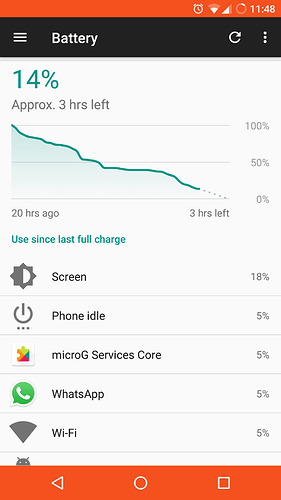 This is after half day of usage including the night

Maybe the microG settings might give a hint, e.g. by checking which apps are registered for Google Cloud Messaging?

Another idea: did you already check the #batteryguide?

Thanks a lot for your reply. I unregistered some apps that I really don’t need notifications for. I did this in the past. but there were some that I can still unregistered. I will give a look to the battery guide

I recently chanced from FP OOS to Lineage with MicroG.

After backing everything up I downloaded the zipfile and followed the lineage instructions. As a person who never worked with ADB before I installed it (because it says so in the instructions) only to find that I cannot transfer the zip via console. So I restored the old OS and moved the zip to my SD card like that, not very convenient. Then I tried to install it out of TWRP and it complained “zip signature verification failed.” I disabled the verification (is one supposed to do that?) and it worked.

In MicroG I activated UnifiedNIp, the others services are so far deactivated

The main apps i use are

I am running it for a few weeks now, and thus far these are my remarks:

all in all I am happy with the transition. It gives me a bit more flexibility installing google apps than before without having everything in google grip.

PS: I just updated to a newer version of LineageOS and maybe the screen glitch is now gone, but I still have to test it.

I really liked the option from the FPOOS keyboard to have a button to switch the language. I frequently change between german and english, so it was superconvenient. Does anyone if there is a way to have this option with lineage?

Yeah there is the option too! Just go to “Einstellungen” and then “Sprache&Eingabe”.

I’m impressed of two days without charging. How you manage that? My battery life also improved a lot with Lineage but not at that point…

Ah, found it, brilliant! Tank you! (I wasn’t aware that I didn’t add english as language and with only 1 language the button doesn’t show up in the interface).

I don’t know if I do anything special about the battery life. I wouldn’t call myself a heavy user; at work I only look at the phone a few times a day, use it during travelling to and from work (which adds up to an hour) and in the evenings are mostly not very busy either. I don’t run a lot of backgroud services. I use mostly 2 wlans, so not a lot of switching there … before lineage K9 was using up a big chunk of the battery (up to 20 %) for some weird reason and I never got it fixed. That is not the case now anymore, so maybe it was just K9 by it’s self.

I put the the profile to efficient (2 point in the scale), didn’t dare to use the “energy saving” all the time so far. Maybe that makes the difference?

I had to do that also, I assume this is normal behaviour

before lineage K9 was using up a big chunk of the battery (up to 20 %) for some weird reason and I never got it fixed. That is not the case now anymore, so maybe it was just K9 by it’s self.

Ah, thanks for the info! Good to know.

I have only 1 mailbox and I set it to manually checking now. That works obviously, but I still wonder why it behaves like that. I couldn’t find much on the topic so it doesn’t seem to be a major problem on other phones.

10 posts were split to a new topic: Discussion about offficial LineageOS support from FP (and why it won’t happen)

Does anyone experiencing more battery consumption after updating the OS?

For me its usually a couple of days more battery usage than “normal” and after 4-6 days its back to where it were before the update or even better.

Is there an explanation for this?

What I had experienced that the media indexing process used quite some resources after there were file transactions like after an update or file transfer to the phone. One time it drained my fully charged battery within a few hours after I had transferred a few GBs of small files to the phone. It needed several hours to index them and at least on Lollipop it seems to run on high priority.
Maybe this is the effect with your phone and it calms down when finished. I am not sure if there was a change on Marshmallow concerning this process or the priority.

In this thread https://forum.fairphone.com/t/fp2-battery-problems-drains-quickly-cpu-gets-hot-see-batteryguide-for-workarounds/12334/229
I followed the hint of @media_rw placing empty “.nomedia” files in all folders I did not wanted to be indexed (neglect system folders like ringtones/notifications also pictures etc.).
This works fine for me and the media process only takes care of system files.

You could lookup the running media process and monitor its behavior if listed. Maybe that´s the explanation.

Thank you for the explanation.
Maybe that could be it. But indexing media could take days? wow.

So the best way could be to put a “.nomedia”-file in every folder, where indexing is not necessary…

How exactly can I monitor the media process after the next update?

Actually I can only tell for Lollipop.

Go into settings->apps swipe to “running”. If the indexing process is active it is listed as “media”.
There you should see for how long it is active already and how much ram it uses. Usage should increase with the amount of indexed files.

But indexing media could take days

I would expect it not to take more than one day but it depends on how much change is done to the file structure of any available media.
Until I knew about what was going on it already took overnight and until lunch time when I realized it would spend my battery.

“.nomedia”-file in every folder, where indexing is not necessary…

That is one solution for taking influence in this process. (actually it is an official Android option not everybody knows about https://androidforums.com/threads/whats-a-nomedia-file.307529/)

It should not be placed into the formerly mentioned folders as the system may not find your custom ringtones/notifications or pictures anymore in case you have some or use the gallery
for your photos taken.

This mechanism is reversible though.

Pushmail just costs a lot of resources (mainly battery via CPU, RAM, and data traffic). Especially if you use pushmail on 4-5 mailboxes. Consider to check every hour or less (recommend manual checking) on the least important mailboxes.

Consider to check every hour or less (…) on the least important mailboxes.

I tried that before I switched to LOS but had the impression that K9 checked all mailboxes with the same interval (precisely: with the shortest one defined), so this didn’t really help.

No idea why know how my mailboxes look like, but that might be a good idea not only for battery-saving reasons…

Since yesterday I have trouble with MicroG and the apps that require SftyNet (Pkmn Go). This is a recent known bug and MicroG team is currently discussing it…
In the meantime I temporally moved to OpenGApps pico.