To offer that as a preference, the Discourse engine has to be modded (not ideal, adds complexity for updating). The advantage of the CSS rule above is that it can be applied just like any other forum style and it can be used to add a visual style to language tags that will make them outstand visually a little (e.g. all language tags in blue). That way we won’t lose the visual feature of flags,

it can be used to add a visual style to language tags that will make them outstand visually a little (e.g. all language tags in blue)

I think it would be perfect if in addition the “lang:” part of the tag could be hidden from view so that only the language (e.g. “Español”) is visible. But I guess this cannot be done with a simple CSS rule?

I really have no idea what solution is causing what problems for programmers.
I just think, that an easy solution would be the best.

Important in my opininon is that the information is given and that it’s easy to see.
Furthermore I would prefer a solution, that is free of biases and possible misunderstanding; so I would rule out flags as well as tiny symbols, especially representing clichés.

For me the concept posted by @Stefan does the trick. It’s simple (in a good way), it is easy to understand for everyone and the symbols stand out enough to present the information at first sight. Visibility might even be enhanced by choosing a bright color for them like bright blue (red or green migt be less visible for people with a red-green colour blindness).
I would not “waste” energy on programming something that is meant to just give some important basic information in such a complex way, that users can choose between various options, unless that’s easy done and will not result in trouble when doing updates to the forum.
But I don’t have to do the programming.

One last thought: Is it really desirable, to offer users the possibiity to choose an option being clicheéd and representing prejudices, that might alienate or hurt other users. At least the moment they are choosing their preferred setting, everyone will be confronted by those clichéd options.

TBH I really don’t get the problem with symbols.
Symbols are used a lot in this world. Especially in places where people speaking different languages come together and all should know what is what.
And they are almost never really representative of everyone they stand for.
The most commonly used symbol for a woman’s restroom is a person wearing a skirt - but many women never wear them.
The symbol for a wet road is a car swirling around leaving impossible skid-marks, although the most common danger posed by a wet road is a prolonged deceleration distance - also the sign is not only supposed to warn car drivers.
I could go on. I don’t think any sign is inclusive to everybody, but they ate used because you get the same info at one glance that otherwize you’d need a word or text in 500+ languages.
I don’t get the critique of using nation-flags for languages if all nations using the same language are at peace and don’t suppress each other.
It would be different if the flag for english was the confederate flag or the flag for german was the nazi flag.

Ok the short poll was clear that this option doesn’t have a majority behind it yet. I changed my mind about it too. What I liked was the flexibility, but tbh the combination of language name + flag (which I prefer) gives the same flexibility.

I don’t get the critique of using nation-flags for languages if all nations using the same language are at peace and don’t suppress each other.

Some people would argue that this is not the case for some seperatist movements around Europe. They want to be nations and their language is part of their identity. We Austrians might not fully be able to grasp the situation @Roboe mentioned above (although there are minority languages in Austria):

inside Spain there are a lot more languages spoken, four of those are cooficial languages (Catalonian/Valencian/Balearic, Basque, Galician, Aranese).

The list of languages of the European Union can give us an idea of the language diversity. If we want to account for all of these languages, the symbols with the two-letter ISO code are still the most neutral option, IMO.

If we want to account for all of these languages

Yeah but do we really want to use that many languages on the forum?
Even the United Nations only use 6 official languages. The more languages we use the more the knowledge gathered in this forum will be scattered, the longer it will take for people to receive help and the more falsehoods will probably be uttered before someone debunks them (like “use rice to dry your phone”).
I think our main goal here should be to find a way to mark threads of different languages that works for as many languages as are needed and is clear and recognizable at first glance. And of course we shouldn’t actively discriminate by doing so - which I don’t see happening.

he symbols with the two-letter ISO code are still the most neutral option, IMO.

But it’s also one of the most impractical, because you can’t use them as tags.
If such emojis would exist I agree this might be the best solution until then I think we should find a solution that only needs tags and nothing in the topic title. That way we can switch to ISO-emojis fast once they are introduced.

Paula, even the women’s skirt symbol got some criticism: 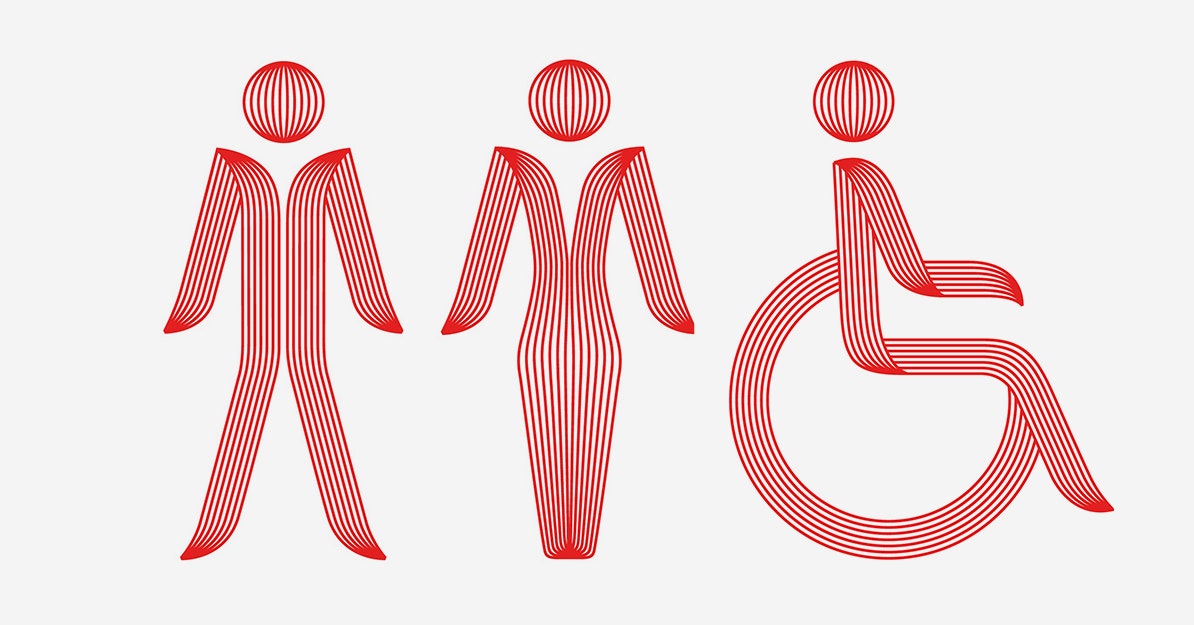 For decades, the pictogram for the women's restroom has featured an A-line skirt. London firm SomeOne has come up with a more modern alternative.

Icons are linguistically a cultural relation between signifiers and meaning, but just for that they can’t guarantee that they have always the same meaning, specially for a global public, multicultural and with diverse thinking.

And, by the way, nations are not states: Spanish Constution states that Spains is a multination state, for example. And that’s good.

P.S.: I’ll stay three days almost without Internet, so please excuse my silence in that timeframe.

Paula, even the women’s skirt symbol got some criticism:

I know, but until a better alternative is found it’s still the best solution.
I actually think the symbols in your linked article are even more sexist. Women are pressured by society to sit with their legs together so they take up as little space as possible while men get to spread their legs across the space of two seats. I don’t think this should be encouraged by symbols.

And the strange thing is there are actually internationally known symbols for women an men that could be used. Although if you wanted to be inclusive you’d have to add some more symbols.

Exactly the same thing. We here have a working system with country flags, and we’re looking for a better alternative, more inclusive culturaly.

We are not asking to change the system right away or ASAP, but eventually. For better,

Even the United Nations only use 6 official languages

By the way, the UN doesn’t use flags, but words on its website

For me the best option has always been words. I would vote for:

By the way, the UN doesn’t use flags, but words on its website

yep, along with the name of the language. It is quite efficient. The drop-down menu in the top right corner works well.
They use the same system here as well: http://europa.eu/

It may not be as beautiful as flags or ISO code symbols, but we could break up the regional indicator symbols so they don’t form flags.

PS: If we combine it with text (e.g. español-🇪-🇸) it will be easier to tag topics:

Pressing enter will tag the topic with #touchscreen and not #en::tag.

I got another stupid idea.

You are kidding, aren’t you?
The first problem is, that no one would get the meaning without the explanation beside it; not to mention, that it might touch a sensitive point to make fun of the languages like that.

One reason I really don’t feel comfortable with symbols of any kind is their recognizability.
For traffic signs or everyday symbols it’s no problem, obviously, as they are presented “bigly” and they are very well deciphered.

The forum-symbols on the other hand are a tad on the tiny side, even more so displayed on a mobile. This renders them useless once they become to complex (I never would have recognized the heads of horse or dog).

Same goes for flags in my opinion. There are two major troubles:

Obviously the iso-codes do represent usually countries as well, but they are at least easy to understand and ES can stand for España as well as for Español.
(Btw. at least Windows 10 does not give flags for emojis but the iso-codes as well.)

You are kidding, aren’t you?

Yeah that happened with the latest design change. I don’t know if it’s intentional.[quote=“BertG, post:59, topic:26403”]
Btw. at least Windows 10 does not give flags for emojis but the iso-codes as well.
[/quote]

That’s not ISO code, those are regional indicator symbols.
The ISO code for english (oh and yes they represent languages, not regions) would be EN not 🇬 + 🇧.

From the respective Wikipedia page:

ISO 639 is a standardized nomenclature used to classify languages. Each language is assigned a two-letter (639-1) and three-letter (639-2 and 639-3), lowercase abbreviation, amended in later versions of the nomenclature.

That’s the spirit! We need Stupid ideas to have fun in such topics!

I played around a bit with the FoxReplace extension. With this extension it is pretty easy to modify the visual appearance of the current language tags on the forum. 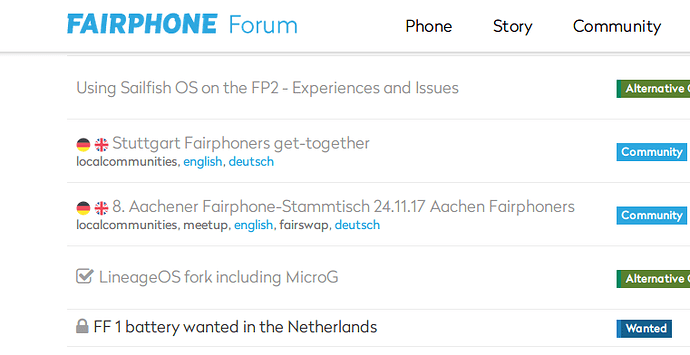 In my opinion using a different color for language tags would be sufficient, no special characters would be needed.

To change the color (or any other style) of a tag a CSS rule is needed as suggested by @Roboe:

With a “lang:” prefix one CSS rule would be sufficient. Without such a prefix a CSS rule for each language would be needed.

The question is: could such a CSS rule be added to the forum?

Another (unrelated) question: what characters or other signs like ‘-’ are allowed within tags?