Is complete self assembly from parts possible?

Is it possible to assemble a fairphone myself by buying all parts separately?
I see seven replaceable parts for a total of 265 € in the FP3 parts section: do they make an entire phone?
In other words: are really all parts replaceable?

Is it possible to assemble a fairphone myself by buying all parts separately?

No, because you currently can’t buy the core module outside of a repair job, and it would of course be the most expensive part of the phone as per the repair price list … https://support.fairphone.com/hc/en-us/articles/360035880131-Fairphone-3-Repair-price-list-and-FAQ-Cordon
(They still have to correct some copy-and-pasted specs from the Fairphone 2 there.)

In other words: are really all parts replaceable?

They are, in that sense. Whether you can freely purchase them is a different matter.

At some point perhaps resellers might step in and sell the core module for a while, we have seen that in the past with the Fairphone 2, but there’s no certainty about this.

@Joost_Ringoot
And you just can buy the back cover, not the frame.
Plus a few more tiny details like the screws, that do not come with the spare parts, as you have them, when replacing a part.
Just take a look at the iFixIt teardown to see all the parts of the phone, to get an idea, what you are missing when buying the available spare-parts.

Your best bet for getting a Fairphone 3 for cheap is keeping an eye on the forum. One was just sold for £330 in the Market section, so keep your eyes peeled.

@lorahaspels
Has Fairphone already considered selling the phone as a DIY-set “Build your own phone”; with the modules, casing and screws to put together.
I guess, it wouldn’t even have to be cheaper, since it’s just the finishing touches, that are missing and the packaging would have to be designed differently. Maybe that different packaging even makes it not feasible or would make it more expensive.
Still, even in that case, there should be a market for that kind of thing. It would e.g. make for a great gift.
Just an idea of course.

Urs had an idea like that a couple of years ago; it would be fun, I think. Also good publicity - the phone that you have to assemble yourself! I can see the YouTube clickbait titles now. Maybe give people a €10 discount, or have FP donate a bit of money to charity every time someone opts for a disassembled phone rather than a pre-built one?

I guess the problem with that would be that new FP3s are presumably factory-tested after they are assembled, and so selling them disassembled would involve that extra step of disassembly after testing, which would add cost. And it would probably increase the number of warranty cases as some people would screw up the assembly. Tightening screws too much, not clicking bits into place properly, getting finger grease on contacts, et cetera.

True, but that is nothing new and should not really pose a problem.
There are even high-quality clocks being sold at thousands of Euro as kits for assembly.
There are 4 different models from 3,100 to 8,000 Euro (with various possibilities for an upgrade):

The URL “uhrenbausatz” even translates “clock assembly kit”.
Of course they add an assembly book to every kit.

So it really should be an option.

But, as you rightfully stated, I would not expect the kit to be cheaper than the fully assembled phone.

There’s a man on YouTube who calls himself Clickspring, he has a video series where he shows himself building this beautiful brass skeleton clock from scratch. Very calming.

I wouldn’t mind a super-sized smartphone that had to be entirely assembled by hand, soldering and all. So no surface mount components, all through-hole. If a memory chip goes off or a capacitor bursts, no worries, just get out your soldering iron and replace the part!

Say it were a phone the size of the FP2, just three times thicker… I think I’d carry that around, just because I could make it last forever and upgrade the (socketed!) memory chips whenever I wanted to, have it run on a widely available battery and use it as a door stop to boot.

To just have that delivered as a bag of electrical components would be a thing to see. A man can dream… 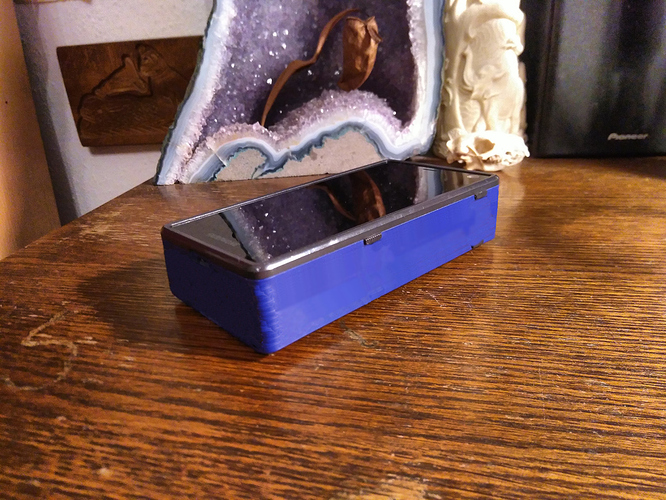 You mean, like you can do with e.g. this mobile headphone amplifiers:

Trouble (for me) is always finding the time to do that kind of stuff.

Next battery charging needed in July.

Is that all battery like in the energizer phone?

No, that’s a digital mockup of what a build-your-own-phone would look like. There’d probably be room for more battery in there, though.

I wonder how small you could make a smartphone that is entirely socketed chips and through-hole components. Probably wouldn’t be insanely large - just a lot thicker than we’re used to. And the LCD would still be a glue sandwich because that’s the only way they make them anymore.

I suppose that realistically you could just hook up a screen, SIM reader and a couple of antennas to a Raspberry Pi - but that’s no fun.

I recognise a bricked phone when I see one

Well, yes there are just people who like to build things themselves.
And indeed it doesn’t have to be cheaper.
For the computer market this has worked since the 80ties, it looks like the ratio of people who do assemble their computer themselves has declined, but I and a lot of my friends still enjoy reading about computer parts, reviews, performance tests and then selecting, deciding and buying and building it themselves.

I see you may be into it as well

If Strange Parts can assemble a complete iPhone from scavenged parts, it is likely you can do the same with a Fairphone. The question is how much time and money is it gonna coast you.

For Fairphone 2 there were various community mods (such as Qi charging, USB-C, LEDs on back) and also replacements by the company (such as cases, battery, camera mods).