I found a problem with the country flag displayed at the German website of Fairphone.
Unfortunately I (as a new user) can embed only one image in a posting, so I have to show both flags in one screen shot.

I opened the German website of Fairphone: Entdecke das Fairphone 3, Fairphone 3+ | Nachhaltige Smartphones
There I see at the top an invalid flag for Germany (I think it is the flag of the Netherlands).
See upper flag in the screen shot.

When I click on this flag and just confirm the settings (Germany and German), then the correct flad is shown.
See lower flag in the screen shot. 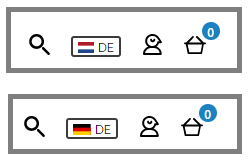 I think flag and abbreviation are for different purposes: The flag is for the country your reside in, the abbreviation for the language of your choice.

I live in Germany, so why is the Netherlands flag shown?

I can just speculate. When you visit the standard version of the shop (shop.fairphone.com), the Dutch flag is shown, too. Looks like a default setting.

Because that’s the home country of the fairphone, so I guess, it’s the default setting. The ‘.de’ then only sets the language.
But we are also just users here in the community, that’s a question for the Fairphone staff, if it’s bothering you that much: Kontakt - Fairphone

Also keep in mind that buyers of German language might buy from Austria, Belgium or Switzerland as well. In the latter case (Switzerland), the country setting gives you a very different price for the Fairphone (359€ for the FP3, 399€ for the FP3+, compared to 399/439 in the other countries).

I thought the Fairphone Staff is also looking in the forums?

Sometimes, but not on a regular basis. So the forum is not the official way to contact Fairphone employees.

OK, I contacted them.