I would like to know to now how to install th rom stock for fairphone4 after i install /e/os.
i follow [https://support.fairphone.com/hc/en-us/articles/4433978210833],but i have an error message as: 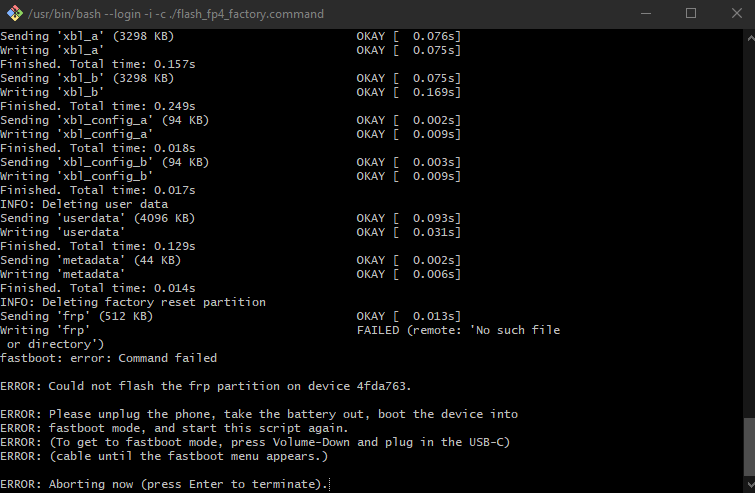 so i am a little bit lost.

thanks fo your help

Hi and welcome, whatever you do dont lock the bootloader afterwards. It would very likely brick your phone.

Stuck in a bootloader loop Fairphone 4

I’m in a bit of a pickle. My new Fairphone 4 arrived today and I didn’t want to sign my life over to Google, so after doing some preliminary setup, like going through the process of OEM unlocking the phone, I installed eOS on the device. However, even on the pre-installed OS, the phone wasn’t connecting to the cellular network, but there was a notification about setting up 5G after I connected to wifi, so I figured it was just Google gatekeeping me or something? But after rebooting into eOS, the…

thanks,but i am not stuck in a bootloader loop,i install again /e/os and its works,but i want to install Ubuntu toucth and for that i need to install first the rom stock on my F4

Cant help with this, just wanted to warn you. Have you tried again?

thanks for the advice,yes and same issue,apparently the partition frp are missing,is it due to /e/ os? and how to repare it?i look evevrywhere and found nothing

Did you unlock critical as well as decribed here?

The Fairphone 4 (FP4) gives you the freedom to unlock your bootloader. Opening the bootloader allows you to install an alternative custom operating system (ROM) or install Fairphone OS offline. -I...

yes i unlock all and didnt lock after juste in case

That looks like your fastboot is outdated, what’s the output of fastboot --version?

Hmm, yeah, that’s not it then…

Could you check if you have frp_for_factory.img in the images folder?

yes i have it on the folder

That’s the right one

Ok, some other things to try:

honnestly,i try it on my windows laptop,ubuntu laptop,with different cable and time
i start to pissed of

do you know the command in ADB to get all the varaible on the phone? i forgot it? 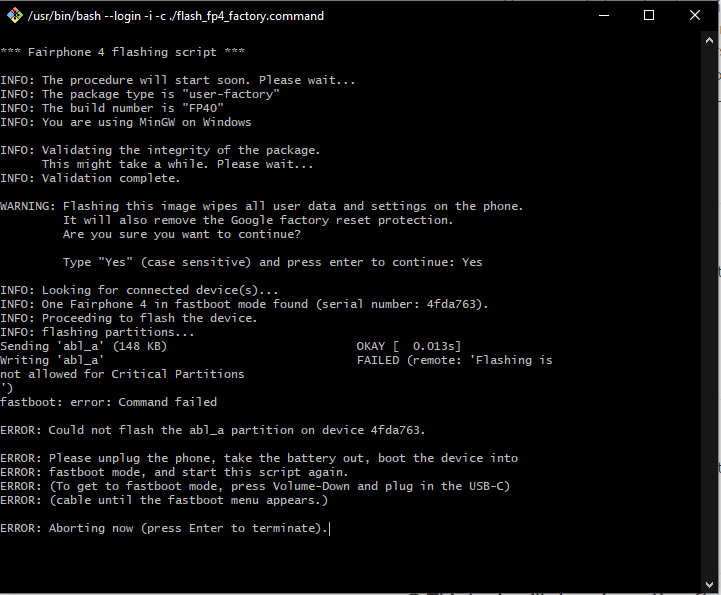 That means you didn’t unlock critical partitions, you’ll have to run fastboot flashing unlock_critical, beware that this will wipe your data (which you probably don’t care about anyway

let me try just in case,no the phone are empty

What do you mean by that?

I don’t really understand why you suddenly can’t flash critical partitons anymore, when, according to your previous screenshot, you just did.
Did you use any commands in between?

My advice would be, move this over to your Ubuntu laptop, so we can rule out Windows doing something weird.