Hi,
My phone is apparently a Failphone. The second one after changing the first in August 2016. They accept to change it. I even have the DHL sticker to send it back. But I can’t without backuping my datas and apps on the SD Card, which was possible with Android 5. My SD has a weird name since I have updated the phone to Android 6, but my former data are ok on it.

I have an issue to copy my apps. I made a search on the web, find it’s possible on Android 6 on avery Androphone. I have the last update. The phone is not rooted.

I go to Settings > Applications > Select an App > Storage and there I don’t have a button "Move to SD Card. It was possible before.

I’m not familiar with Android, as a former iOS user and the folders and architecture is a mess for me, I don’t know how to find anything to copy on my Mac or PC. Names are a clue.

I’ve send messages to the support, but nothing for now.

I attach a screencopy of the window where the button apparently has to be, with the “clear cache” and “erase data” buttons. It’s in french, but I guess it is easy to understand.

Is somebody have the same issue ? Any answers ? 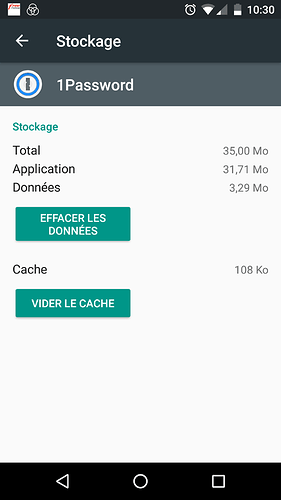 The renaming of SD Card is Android 6 specific and has nothing to do with Fairphone implementation. “Move to SD Card” is most likely same. While upgrading you got the choice of having the SD Card working as an extended internal space (which could carry app information but I believe not in a way that you can control it), or for media data. I believe, Google has deleted this functionality from Android.

No, I check on Internet and it is always possible, even if some apps can’t.

Interestingly, the site you link to claim differently in their forum, suggesting that adoptable storage needs to be activated (which deletes all data, and means it won’t be usable in another device without reformatting) for this to be possible:

[…] as of Android 4.0, official SD card support was removed from Android devices. What this means is that any device running Android 4.0+ has varying degrees of compatibility when it comes to moving apps to your SD card, ranging from partial transfers to no transfers at all.

If your device is running Android 4.x or 5.x, it is very likely that you will not be able to move apps to your SD card. There are apps in the Play Store that can do this, but the vast majority of them require your device to be rooted.

This feature is returned (in a way) in Android 6.0+ in the form of adoptable storage. It functions by essentially turning your SD card into an extension of your internal storage; its capacity is added to your internal storage. There is no separation of internal and SD card here. For more information on this, please refer to the Android documentation for it.

I’m not sure what your goal is, but I would like to point out that moving apps to the SD card is essentially useless for backup purposes - moving the app will not copy all data, and most apps will need to be reinstalled when you move to another device, or factory reset your device etc.
Backup apps generally work very differently to what moving an app to SD-card does.

Maybe better to downgrad the system to 5.1

I worried yet there is no solution for a 6

Download the file you chose, but must be on SDcard.
Rebbot your phone and hold start button and up sound many seconds.
Your phone will show you a new screen with many choices. Use down an up sound touch to move and power to select.
So move too the down to “install from SDcard”, then follow the instructions.

Good luck.
It is safe, i already made it, it is so easy, don’t worry. Just chose well your file, one is with google app, other is not.
Oh, think about save your personnal data before.

Thanks for the informations. The problem with forums when it is not your language : you miss things.