Last week at iFixit we did a teardown of the Fairphone 4, which earned an exceedingly rare 10/10 on our repairability scale. During that teardown, I was impressed with many of the decisions the Fairphone design team made. With repair legislation around the corner in most markets around the world (and already in effect in some places like France) there has never been a better time for smartphone makers to take a few notes from Fairphone 4’s design, and this company’s methods. Here are some that stuck out to me during our teardown.

The most important message I can relay to smartphone designers—and users—is just how crucial modularity is to the longevity of any device. Modularity often dictates whether a device can be useful for an extra year or two, and how efficiently and effectively a device can be recycled at the end of its life.

A modular thing is one whose components can be separated and replaced individually, and the concept scales up and down with the size of different devices. You probably take for granted the modularity of larger everyday things, like cars or bikes. Imagine needing to replace your whole bike when the tires wear out, or pulling out the engine of a car to replace a headlight. 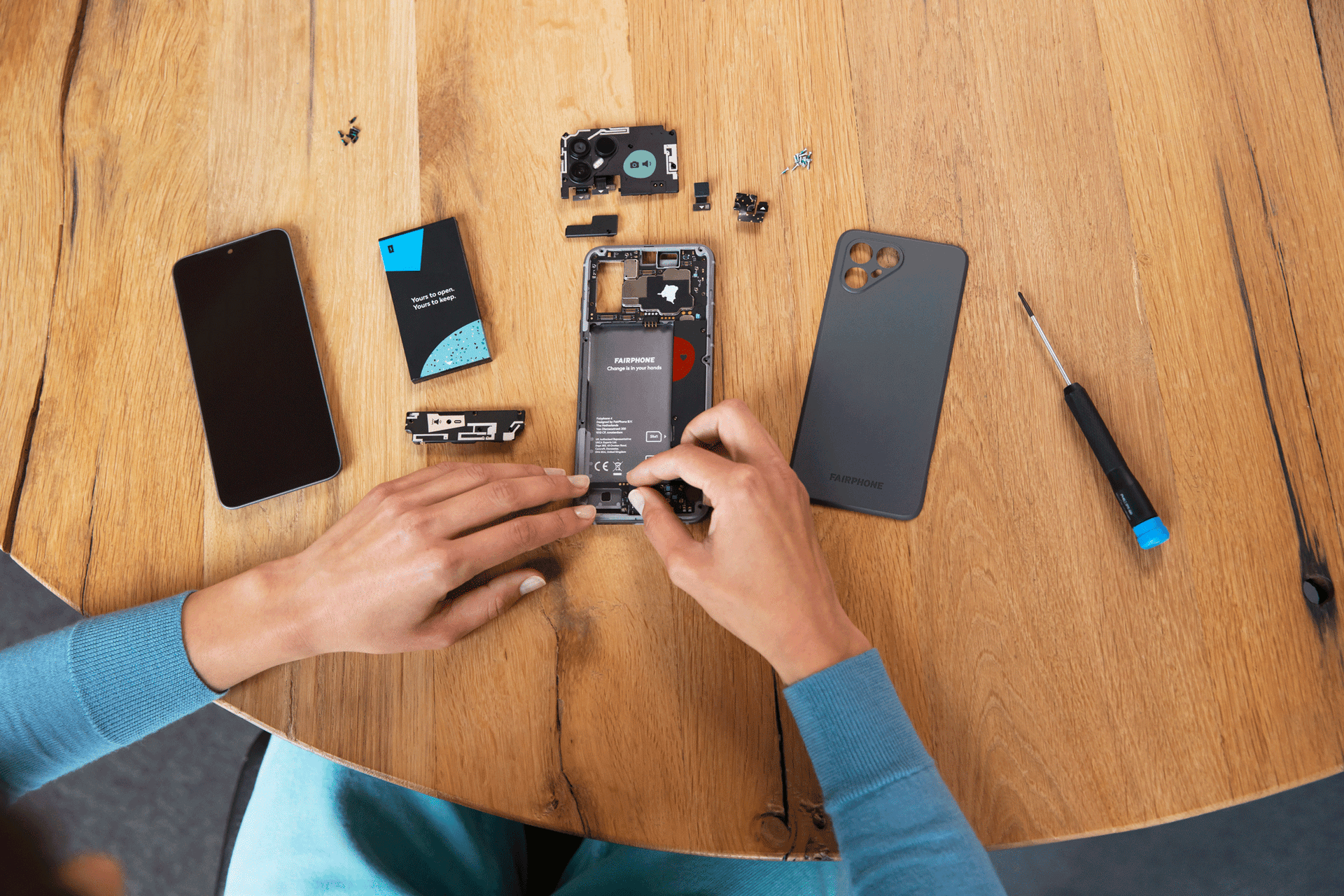 No part of Fairphone 4 is glued shut, so you can choose to easily repair it yourself with a standard screwdriver.

Scale that concept down to smartphones, and you’re looking for modularity in critical components to a device’s functionality, such as the screen, cameras, ports, and battery. Fairphone 4 gives users access to all these components and more, in just a few simple steps, requiring only a Phillips screwdriver and their fingers.

I emphasize using only their fingers and a Phillips screwdriver because simplicity is an important part of design for repairability. Something modular but unnecessarily complicated to disassemble is sometimes just as bad as not being modular at all.

A great example of this sort of conundrum is Apple’s iPhone. Our iPhone 12 battery replacement guide is a whopping 42 steps long. It requires tools for heating and cutting adhesive, four different screwdrivers, and involves removing unrelated components around the battery. Anyone with repair experience will tell you iPhones are among the easier smartphones to repair (and they do regularly earn up to a 6/10 on our repairability scale), but show that guide to most repair newcomers and they’d likely let the Apple store handle it.

And that’s the rub. A modular device whose repair procedures are overly complicated, is—you guessed it—less likely to be repaired, reducing its useful lifespan, and increasing the complexity of the recycling process at the end of its life.

Compare that to a Fairphone 4 battery replacement, which doesn’t yet have iFixit guides for an apples-to-apples comparison, but I can assure you it would be under 10 steps.

Smartphone design is inherently an exercise in compromise—you are fitting as much technology as a laptop has, or more, into a thin handheld slab.

Fairphone made some great compromises when they built Fairphone 4, and it is time for other companies to start thinking about the compromises they can make to create more useful but sustainable products.

The most important—and most controversial—compromise Fairphone 4 makes has to do with its ingress protection (a.k.a. IP, or water and dust resistance). By aiming for a less ambitious IP rating, Fairphone avoids using adhesive and instead uses a combination of clips and screws to hold their phones together. This one compromise knocks 5–10 steps and a great deal of complexity off any repair.

That’s a big win, but it comes at a cost. IP certification is a spec many users look for in a new smartphone, so a lower IP rating can put Fairphone at a disadvantage in a head-to-head comparison. Less ingress protection also means the phone is technically less durable than, say, an iPhone. Here I will point out that most people do not need an IP68 certified smartphone though; IP ratings have become, like many smartphone specs, something expected to only ever go upwards. Fairphone 4’s IP54 rating will keep it safe from rain, accidental splashes, and encounters with sand or dust.

That’s why I’m glad Fairphone made this compromise. IP54 isn’t perfect, but it’s a good start, especially given the repairability it enables. The smartphone industry hasn’t found the sweet spot for ingress protection yet. Other gadgets that have been around longer are closer to it: cameras and mechanical watches, for example, both have more moving parts than smartphones, yet neither typically relies on adhesive to achieve their IP ratings (which, in some cases, are even higher than iPhones).

Several other complicated decisions make Fairphone 4 a compelling, repairable, sustainable smartphone: the type of screws, the hard-shell Li-ion battery, processor and wireless chip selection, warranty support, and many others. The last one I’ll highlight here is Fairphone’s choice to combine some of their spare parts.

Combining parts is a hot-button issue at iFixit. Bundling two or more components into one integrated “part” can raise the cost of what would otherwise be an inexpensive repair, and taken to an extreme, can become the antithesis of modular design. Admittedly, we’re jaded by experiences with a few bad actors over the years. For example, Apple (not the only bad actor, but an easy one to make an example of) has a recent history of building fragile cables into expensive displays, and serializing components within their devices, then hiding behind software bugs or paper-thin security claims.

Ultimately, combining parts is a tradeoff—when you integrate one or more components, you lose modularity, but (hopefully) gain simplicity.

In Apple’s case, repair seems a distant consideration when combining (and serializing) parts. Fairphone, on the other hand, has ably walked this line for the past few years. Fairphone 3 was an almost unbelievably modular device, with every component in its own spot, easy to access and remove on its own. 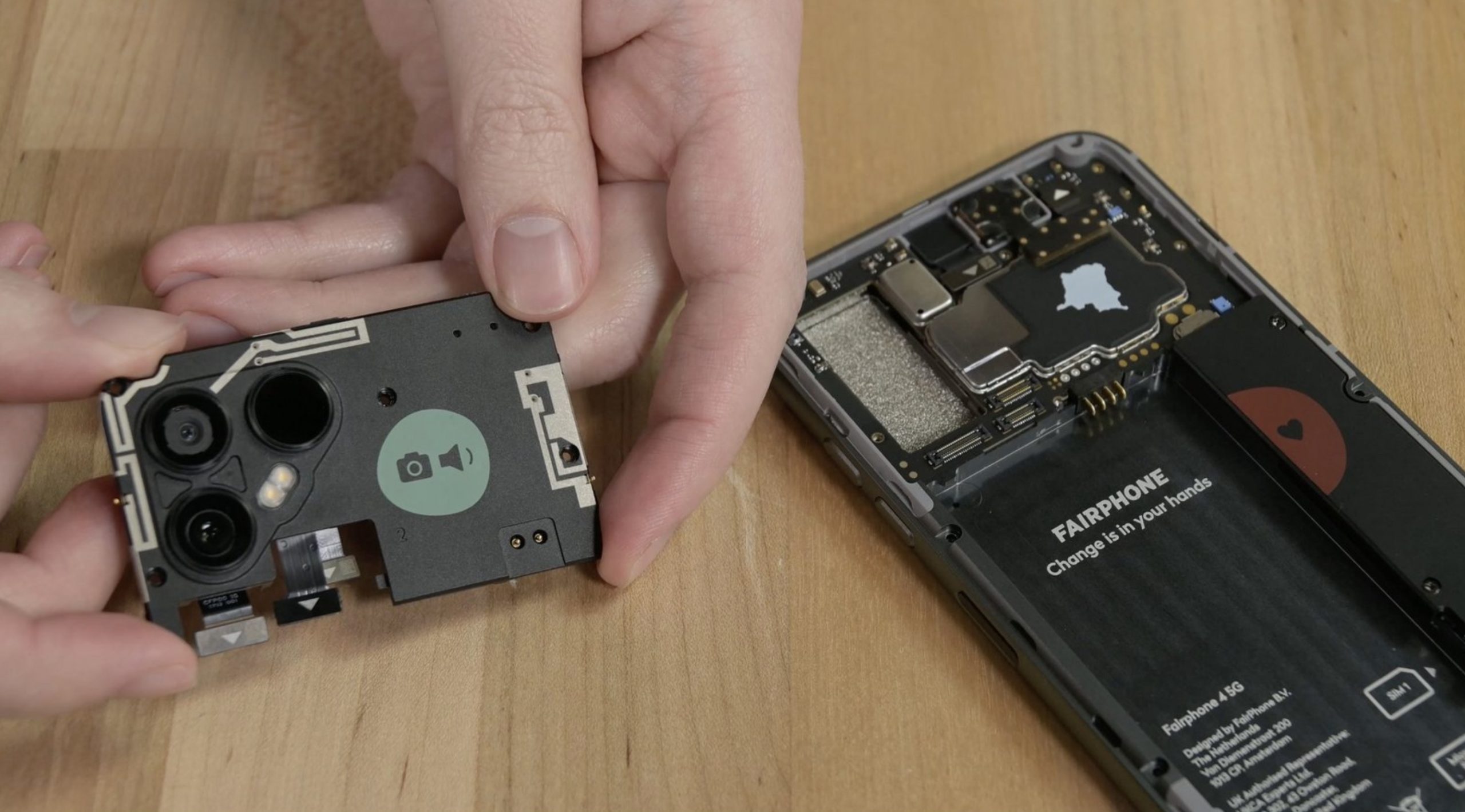 This device is a challenge to the industry to rethink the modern smartphone: True innovation should be about solving problems, rather than creating new ones.

Fairphone 4 changes up this formula by combining some of those parts. Despite my inherent apprehension, it works. By designing the combined parts to be further disassembled when necessary, and only integrating with low-cost parts like the black antenna (shown above), they keep spare part costs low. It’s a great compromise.

There are a lot of good things to say about Fairphone 4. It was a treat to take apart after a long string of glued-shut devices this year. It’s a shame so many companies release products with very little thought about where they will end up at the end of their useful life, or how long that will take. I’m thrilled that Fairphone continues to buck that trend, and I hope other companies start to copy their homework.