How “waterproof” is the FP3? IP Rating

Just keep in mind, that this experience, however bad it is, does not represent all users’ track record.
Plus, that you can not recall the damaging event, does not mean it didn’t happen. It’s just, that you did not consider it a problem at that time (most likely long ago), because nothing obvious happened. E.g. a water bottle leaking in the bag, where you kept the phone,

Please don’t get me wrong, I don’t intend to blame you or something like that; you might as well have got a bad phone, that was not as watertight as it should have been.
I just mean to explain, that this is not the normal thing to happen.
IP54, being considered enough for outdoor lamps, should be sufficient for smartphones any time.

Still, I understand, that you don’t trust FP anymore and consider buying a phone by another company. (Though bad things can happen everywhere; rembember the exploding/burning Samsung batteries.)

Early this year many of its sensors (accelerometer, gyroscope, etc.) stopped working all of a sudden. I could still use my phone properly, the only thing that annoyed the hell out of me was the camera app that could not rotate the picture anymore so I needed to rotate each and every photo to landscape manually.

Same here - my accelerometer (not sure about gyroscope) is flaky, and yes, it’s annoying that most photos end up rotated…

I have lived on a boat for 16 years and another 16 aside the tidal river where it is damper than most places, especially as this is in the south west of the UK, Cornwall. I’ve had no issues with corrosion on any of the phones I’ve had for some 20 years, Nokia and Samsung. I hope this FP doesn’t buck the trend ~ only had it for a month

Sounds exactly like my story aswell, so it’s not a ‘single cause’

I really feel for you, and I’m sorry to get your stories down to stats, but 2 stories, or even 5 stories out of… I don’t know how many, but certainly quite a few, is what I call a near “single cause”. There is also a story of a user whose FP3 fell in a lake, stayed here for the night and had nothing and was perfectly working (saw it somewhere, then believe it or not), there are extremes on both sides, they had good luck and you probably had bad luck. I don’t say it’s impossible that it’s a problem with the phone, and it’s perhaps a defect, but please remember the FP3 was never marketed as waterproof and only has an IP54 rating, which under heavy rain isn’t much.
I can also tell my story with my FP2, which I once had in my pocket during a quite heavy rain, thinking my pocket was waterproof. Though I know how stupidly you can get water damage, and when I opened it I found drops of water everywhere. Opened it, let it dry, and had no problem after. Had I not checked…

TL;DR Two stories are not much, even more on an unrepresentative online forum, only stats can tell if it’s a design fault.

The problem is: Every device has its history, and if bought second hand, nobody knows until every part is disassembled…

Well it’s in a couple of tests and reports aswell (unfortunately I’ve read them now and not before buying it). But this is still a very important point (and I think I’m not just talking for our three or four cases). The typical FP costumer does willingly accept deductions on the technical status, the weight, the size, price etc. but wants it to be longlasting and best possible for the enviroment and people.
This is why I’m dissapointed, because it was just those two little things that where imporant for me and now it’s more vulnerable than everything I’ve ever had. And I think it should be more visible if there got dampness in there as it took me a lot of time to explain, check, try, reset, send it in (and my spare phone is so old, that it has a grey beard and a walking stick (;)), so it’s not fun to wait for the other one to come back without anything changed)

This is why I’m dissapointed, because it was just those two little things that where imporant for me and now it’s more vulnerable than everything I’ve ever had. And I think it should be more visible if there got dampness in there as it took me a lot of time to explain, check, try, reset, send it in (and my spare phone is so old, that it has a grey beard and a walking stick (;)), so it’s not fun to wait for the other one to come back without anything changed)

is so old, that it has a grey beard and a walking stick

like me but no walking stick yet, thankfully, I get by and about.

I agree with everything but

I think it should be more visible

wouldn’t that be nice but age tells there’s no should, maybe could, but definitely a hope for the future.

Yes, but the problem is: Dampness (water) is the greatest evil of electronics. Once the corrosion has started, there is no way back, and such devices can then no longer be sold or with great difficulty only. But it might turn out that your device is not severely damaged, because the watermarks may turn red quite easily.

My advice: Take back your phone and look for another (used) camera, and see how long both of them are going to last. And do not forget to make backups regularly!

look for another (used) camera

List of people selling or giving away their FP3 camera modules

Just a simple idea on the side: As I now have a couple of the little plastic bags that new FP2 slim cases come in, I have gone to use those bags as an emergency rain protection for my FP3+.

These little simple bags come without holes (previously I found many little plastic bags from other products I kept had punched holes out of the box – maybe a precaution against suffocation of kids?), they have a sealing line (one of those you press shut) and while they certainly won’t seal enough to go diving with your FP3 (or FP2), they still come really handy when you just want to protect your device in your jacket when you get into rain unexpectedly. With some care, you can even just fit an FP3 with a protective case inside them.

Having a case also helps keep some water out.

@fellowfreaksnnerds: I tested it. I filled some instant lemon tea corns (granulat, you might remember from waaaaay back …

) into the bag, tried to push out as much air as possible, made sure the brown stuff rested right next to the sealing line and submerged it under water for 2+ hours. See what it looked like then (first photo still fully submerged after 2+ hours, the other two after wiping the bag from outside): 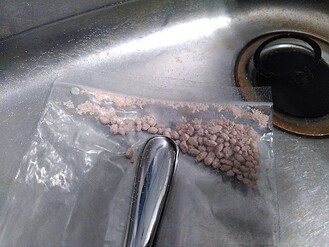 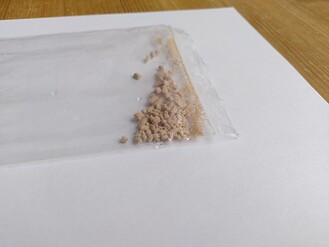 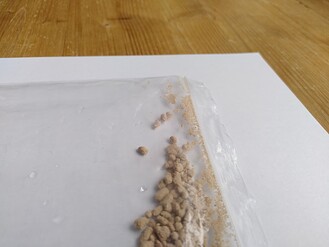 Not too bad for a bag not designed for this. Please note the sandy parts near to the sealing line were already that sandy when I filled the stuff inside. It does seem that tiniest amounts of water were able to enter at least at the very left, but frankly the wiping and dealing with the bag after pulling it out of the water might have done it just as well.

What could be helpful to future readers of this thread is:
Is there a way to check the moisture sensors yourself, and if so how? So that if they are activated, there’s no use sending the phone for repair.

They can be checked by dismantling the phone and looking to see if the rather obscure white dots have gone pink or red. 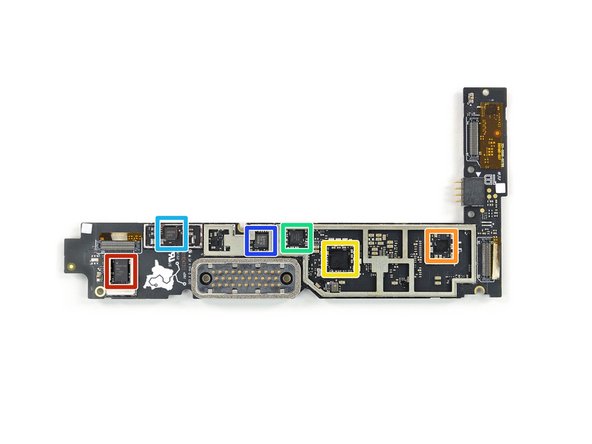 6 Likes
Rain water inside - what could be wrong?
My phone refuses to charge(and I have followed all the guidelines)
Phone not working after being dropped
I dropped my phone in water and now it won't charge
Sensors won't show after water incident
Any assistance/thoughts/advice on how to recover from hardware damaged by water would be highly appreciated
Touch screen non-responsive after water accident
:hockey: Canadian Fairphoners! :canada:
FP3+ Touch screen goes haywire when charging via mains, eventually stops charging and screen stops working
Local repair shop Scotland central belt (Edinburg, Glasgow, Stirling)
My fairphone 3 only charges in fastboot mode
Alex.A September 17, 2021, 8:29pm #33

Yes indeed, I can assess of a water damaged FP3 I dismantled with these two square indicators red.
On the contrary of the FP2, there doesn’t seem to be any indicators on the modules themselves, neither inside the modules (or I haven’t found them).

Also, if you see white traces of corrosion inside the phone, on the metal plate, on the connections, I think you can be quite sure this will also be treated as water damage, even if the water, for some reason, didn’t reach the indicators.

Here is another image: My daughter dropped her phone in the toilet. It was only in the water for a couple of seconds. After drying for a couple of days it has been working for 7 months since.
However as I now have the phone I’ve dismantled it as i am inquisitive. 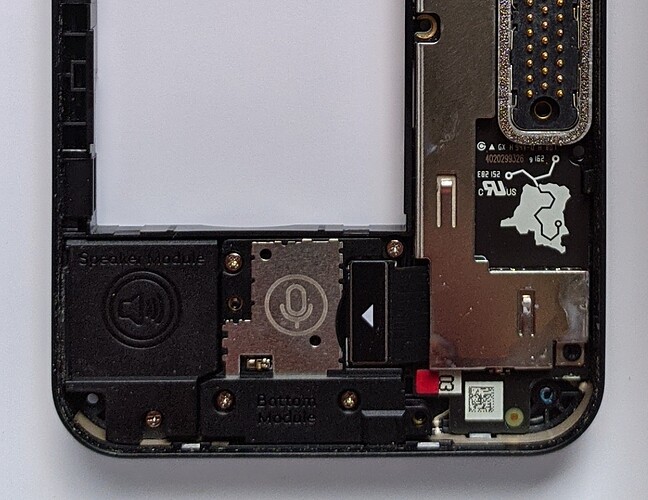 red1212×935 249 KB
7 Likes
:pencil2: How to handle water damage
Will my battery recover more?
Repair place in Amsterdam for FP3
Touchscreen does not react to touch
Touchscreen does not react to touch
Fairphone 3 now not charging when switched on, how can I get it to charge when switched on?
Any assistance/thoughts/advice on how to recover from hardware damaged by water would be highly appreciated
Fairphone 3+ not charging
I dropped my phone in water and now it won't charge
FP3+ Touch screen goes haywire when charging via mains, eventually stops charging and screen stops working
FP3 charging unreliably, USB-C connector broken?
Screen only shows vertical lines
Negative experience with Cordon electronics (repair) FP3
Richard_Barker March 21, 2022, 10:22am #35

IP Ratings are only good when they come out of the factory, and there are not permanent.

The differences between IP67 Rating vs. IP68 Rating enclosures are:

I think your efforts are a bit misplaced 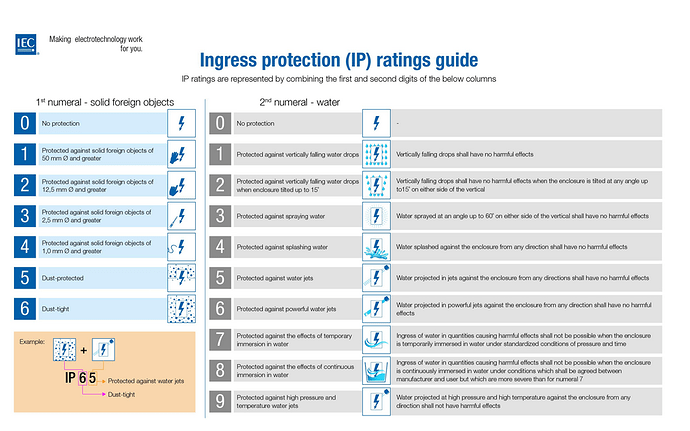