How to remove idle apps from all apps

Hey, does someone know how I could get rid of the idle apps which appear at the bottom of the all apps screen? I have some apps which I really don’t use very often and it’s very annoying when I’m
looking for one of them,
can’t find it in all apps,
think “maybe I didn’t install it yet”,
go to F-Droid/Play Store,
see there it’s installed already,
remember idle apps
or similar, you get the point.
I have GravityBox, but can’t find any settings regarding this issue in there.

I have GravityBox, but can’t find any settings regarding this issue in there.

That’s because the “Apps life cycle” is a Fairphone specific feature and Gravity Box probably doesn’t have any tweaks specifically for FPs yet.

In the beta version of FP2 OS for FP1s there was a (very well) hidden setting for when apps count as idle, but there was no “never” setting…

That’s what I suspected.
I get the idea behind the feature, but I think it’s not perfected yet. Especially when apps I’m looking for just vanish from all apps view, it’s confusing me.
It also does not only concern really inactive apps, but also apps that provide a widget I use frequently (daily). If you just use the widget and only sometimes start the corresponding app directly, it will be shown under idle apps.
I’m requesting a feature to get the hidden button back and vote for a never setting.

I’m requesting a feature to get the hidden button back and vote for a never setting.

You can add it to the #featurerequests::tag topic.

I personally don’t like this idle apps “feature”, because I firstly don’t get what it’s good for and secondly I don’t understand when apps become idle. Last time I booted my phone, my “Idle Apps” section looked like this: 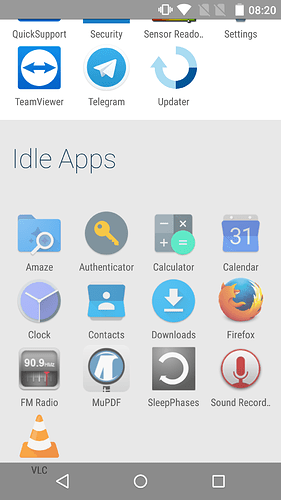