Has anyone managed to get the Google Keyboard version 5.x running on FP1?
On my phone, when I go to the app store and browse to the Google Keyboard app, I have an install button (instead of update, which is curious as I’m using the Google Keyboard v4 already). This used to be no problem. If I removed all installed Google Keyboard updates and reinstalled via the Play Store it would update to version 4 and work perfectly. Since v5 has become available, it’ll update to that and then continually say “Google Keyboard has stopped working”, even after a reboot. I fixed the problems by uninstalling updates and installing a v4 APK I grabbed off of apkmirror, but I would really like v5 to work (it has some neat features). Anyone have any luck on getting this to work on FP1?

I think this better fits into #software:fp1-android-4-2 because it seems to be a general issue with the software. I moved the topic there.

It tells me that the keyboard is installed but I’m just prompted with the message: 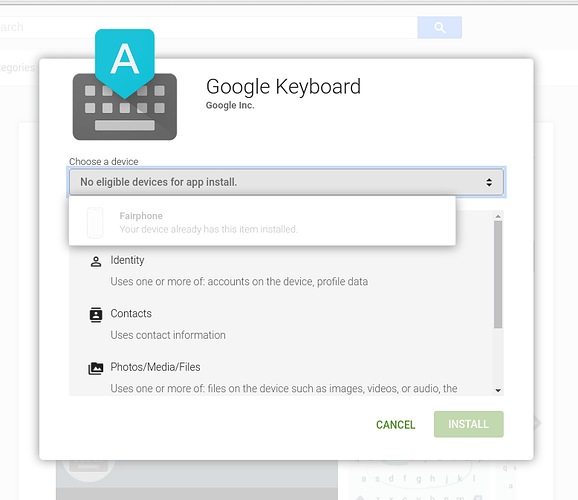 Try this:
go to Settings, tap the “Apps” menuitem, go to the “All” tab and find the “Google Keyboard” app. Tap it and then tap the “uninstall” button.
It will remove any updates to the app but keep the system version of the app.
Then you can grab the 4.1.26 APK from apkmirror.com using your phone and install that. It could be that you need to allow your phone to install apps from untrusted sources. To do this go to Settings, tap the “Security” menuitem and scroll down to “unknown sources”. Make sure this option is checked. After installing, you can uncheck the option again if you wish to do so. When checked your phone will allow apps to be installed from sources other than the Google Play Store, which is considered to be a potential security risk by some.

Thanks a lot @Jerry!

I was able to install this version.

Newer versions, however, cannot be installed on the FP1?

Newer versions, however, cannot be installed on the FP1?

That’s the conclusion I came to, but I was hoping someone would prove me wrong

This is a problem though because Google Play Store will always try to install the most recent version, so the Google Keyboard is no longer installable from the play store on your FP1.