I think this is about codecs and FP1 simply is not able to decode GLONASS signal. I’m not very experienced in electronics though, so I hope someone can provide a more educated answer!

Hm, no real answers yet…
In this (german) forum it is stated, that only chipsets newer than MTK MT6595 support GLONASS (and Galileo) from the technical side.
It would mean the MT6589 used in the FP1 is never able to support GLONASS/GALILEO from the technical point of view…that’s a pity missed it so closed (6589 --> 6595 which is one year newer, 4G)

As far as i know, Galileo is not available to the public yet.
And will most probably won’t be until your Fairphone 2 is really old.

Nothing is wrong with GPS and I am quite satisfied with the GPS performance of my FP1, after getting used to its behaviour.

BUT: the performance (accuracy + time to first fix + stability + coverage) would be highly improved, if the chipset of the FP1 could manage GPS + GLONASS (and later Galileo) signals in parallel (as all MediaTek chipsets newer than MT6595 can do)!!
Luckily FP2 will be capable of this feature

(Whille GLONASS is already working, GALILEO will start service sometime after end of 2016, thus not that far in the future!)!!

Bonjour,
for your new FairPhone number 2, do you use a Global Navigation Satellite System, using the American GPS, the Russian Glonass and the Chinese Beidou-2 ?
I need a perfect Global Navigation Satellite System, not the classic AGPS (Assisted GPS) because I am using my smartphone at sea with the application software Boating from Navionics. Far away from any internet spot or Phone spot 3G/4G, so Assisted GPS will not work.

Welcome to the forum! Please note that this is a community forum, so any answers here are unofficial answers. That being said, this may help answer your question:

I moved your post here and updated the title a bit.

What has been working with the FP1 too is EPO. You can download EPO files before leaving land and use them on sea because they are valid for one month in advance. I suspect FP2 to have the same option.

Thank you for your answer
Many smartphonse are using A-GPS only, so they need an internet connexion to get the EPO files EPO (Extended Prediction Orbit). At sea this is impossible. We can get these filse before leaving the harbor by hand or with a specific application, but after 1 week, the satellites knowned by the files are gone.
With a good GPS antenna and a fast chip , the GPS.conf file can be received from satellites instead of the internet link. We can get a fix in a fast way.
Then if the FP2 is using GPS and GLONASS the application can receive 10 geographic positions by second and can increase the accuracy

@courtox: May I drop in here…

What is your exact concern?
1.) From point of specification the FP2 can handle GPS and GLONASS (so we hope it will do in reality as well!)
2.) With disabled A-GPS (which it is for my FP1) an internet connection ONLY helps to reduce the time to first fix and NOT accuracy after the first fix (by download the mediatek specific EPO files)!
3,.) So if you have not downloaded the EPO data via internet for … let’s say a week or a month, the time-to-first-fix COULD be increased and maybe needs some minutes.
4.) BUT: the more often and regularly you use the GPS (lets say daily), the GPS device continously downloads the position data of the GPS satellites by the GPS signal itself (so called almanac). To download the complete almanac by GPS takes 12.5 minutes and is valid for some hours-days.
5.) If you once have a fix, the accuracy is at the first place only dependend of the number of visible satellites, for which you are very well at sea!
6.) For the FP2 I am sure it will not be worse!!

Could I take you your concerns or which of them are not covered?

Thank you so much.
I got bad experiences with low cost Chineese smartphone unable to download updates to GPS files, GPS.conf from satellites.
I need accuracy so the antenna is the main concern and the GPS chip must be fastand stable enough
Accuracy is depending on atmospheric effects, sky blockage, and** receiver quality**

I suspect FP2 to have the same option.

I’ve never seen the EPO option in any non Mediatek phone. Are you sure FP2 will have it?

Oh, I thought this was something all phones have… Then I’m not sure about EPO on the FP2 anymore.

So it seems I was wrong and you are right: EPO might be available on FP2.

Independently whether FP2 will use EPO or not…:
I would again stress, that it has no influence in accuracy of the GPS signal and only changes the time-to-first-fix after long time of not using the GPS (some days) again. Cheers, Robert

<From point of specification the FP2 can handle GPS and GLONASS (so we hope it will do in reality as well!)

With my first tests I can confirm that The FP2 can ‘see’ and use GLONASS satellites, as you can See at My Screenshot. Sat69 and 80 are used for a fix which are sqared instead oft circle.

Overall I am getting a very fast first fix also inside my flat (top floor) and will check some more details later.

What I do not understand: why The FP2 is not using all russian satellites available? Signal strength is good but I never saw more than 2 of them used… 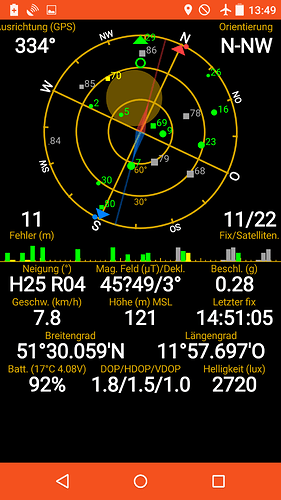 As ESA announced the partly activation of 18 GALILEO-Satellites - is there any information, if we can use this with FP2?
As far as I read, the Snapdragon 801 should be capable of receiving the singals…but I don’t know anything about the HOW…
Is there a firmware / software /OS-update necessary? Or just a special App?

Did anybody found some information about this topic?

The following statment is fairly vage…“This feature is integrated in the latest Snapdragon 800, 600, and 400 processors and modems” [and here]

Look at the next sentence. There is mentioned:

So the FP2 probably won’t be supported.