For some months now, I have got a very curious problem with my contacts. I was not able to find anything related on the internet yet.

When I create a new contact, it is saved under a seemingly random “gibberish” name, which makes it very difficult to find and handle. 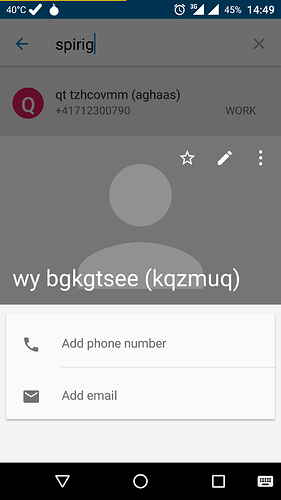 I fail to see a pattern except for:
* the number of letters and numerals remains the same
* uppercase is ignored

Any hints or ideas are welcome.

Just a question: on which language is your keyboard

AOSP is usually English (UK), German (Swiss), Italian or Alphabet (QWERTY), although I have others installed. They don’t make any difference. With a Welsh (org.troi.literatim) or an IPA keyboard (com.edwardgreve.ipakeyboard) I get different gibberish (interestingly, the same for both).

What happens if you use the google keyboard?

I never had any gapps installed on my phone, but I was curious myself and installed it. Turns out it gives me the exact same results as the aosp keyboard.

I don’t think it has anything to do with the keyboard directly, and neither seems a corrupt database to be a problem (otherwise deleting it should solve the issue, or shouldn’t it?). It has to be an encoding problem, but where would that go wrong? How could e.g. installing a non-latin keyboard without root access (the ipa keyboard was installed shortly before the problem first occurred, though uninstalling didn’t help) change the way the contacts database is encoded?

Is clearing the cache of the phone an option? You have to make a backup first.

I think this is officially the strangest issue ever encountered on a Fairphone.
Please try the #troubleshooting guide’s chapter 3: “Troubleshooting unknown issues”, especially 3.1 “Wiping away software issues”.

I think this is officially the strangest issue ever encountered on a Fairphone.

Well, I’m slightly proud to hear that from an expert, even though I have no idea how I managed to catch it

No, seriously, thank you both for your inputs. I will try a system cache reset when I’m having the time and will report back to you about the result.

Well, after a system cache wipe, I reimported my contacts before doing anything else. Creating new contacts made no problem, but there were four gibberish contacts in my backup. Strangely, they showed the same (gibberish) name in the list and when opened, but when I tried to edit them, they showed the real names. So the behaviour is still there, but at the moment only for these for contacts.

That leaves me insecure whether it would be advised to do a full factory reset. (Last time the problem also occurred only occasionally at first but became more and more severe over time.) I think I want to search the vcf file for those four contacts and see whether I can find anything suspicious. I will keep you updated!

So the behaviour is still there, but at the moment only for these for contacts.

What if you recreate these for contacts?

The four remaining gibberish contacts were easy to fix. They looked like

and changing the FN-name adjusted the N-Name. The more time-consuming issue was that about 50 of my contacts had a copy of a random other contact’s phone number in them, which would explain why sometimes a random contact was being dialled instead of the one I wanted to call. Deleting the additional numbers took some time, but now it looks all nice and clean again.

Thank you both again for your help and patience with my wordy attempts to describe a pretty unpredictable phenomenon.