The G Data app involved is basically a malware prevention and abuse deflection system, having a VPN-service as an additional paid-for module. It should be said that everythings works properly so far, except the build-in VPN service.

The technical support staff of the reknown involved German security firm has been contacted for this issue, a fortnight ago. Those folks are still working on it, and some progress has meanwhile been made, but input of the Fairphone.com forum might be prove very helpful to eventually resolve it.

Explanation of the problem 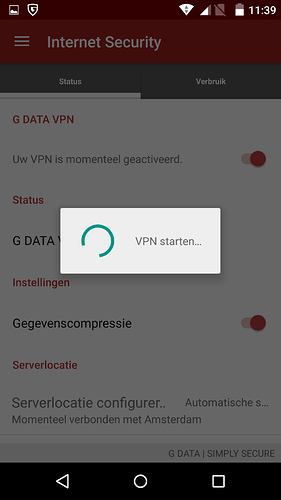 It could be that some, yet unknown, internal Fairphone OS setting in the current Android 5.1 build is interfering with the TCP/IP-setup of the needed VPN tunnel?

Let me know. Any technical help or guidance to resolve this nagging issue by help given by Fairphone.com and/or its Forum users will be much appreciated.

Eventually, after an time-out occurs an Error message is show, saying there “No available internet connection” (which is dead wrong, anyway).

Does the modem support IPv6? If it does, you could try disabling that temporarily to check whether this is one of those problems where attempts to connect over IPv6 fail, whilst IPv4 works normally (which gets you those strange situations where some applications will fail where other work fine.)

Also, did you try any other networks or cellular data? Preferably try to find a place that has a different provider - I’ve had issues with at least one Dutch provider that was dropping traffic to a whole range of ports which meant that I couldn’t access a subset of services hosted on a server at work…

Thanks, Johannes. The involved wifi-modemrouter combo does not mention IPv6 in its internal settings.

It happens to be a so-called “ConnectBox”, delivered by Ziggo.nl, meant for a common household internet account. You might expect to see IPv6 setting, but none of those.

Fortunately, the 3G cellular data connection via KPN Mobile happens to work properbly, like “out of the box”. I’m able to browse the web using VPN over 3G, at least temporally.

Even the expected VPN-key icon now turns up in the upper Adroid menu bar, That alone proves that the G Data Mobile app should up to the task, at least in principle.

However as soon as the Fairphone 2 tries to re-connect to the wifi-modemrouter, the shown VPN-key icon vanishes and the established VNP connection soon terminates.

I will contact the involved cable internet provider, which happens to be Ziggo, to figure out what may prevent G Data to maintain the VPN connection.