Thought I point out a little project that got off the ground, it has been mentioned, but the Topic is closed.

Now if that was Fairly traded etc. it would be in my window.

What is does come is out of the box with Lineage or Ubuntu, some choice and of course the keyboard. Strangley this phone is no heavier that the FP4. 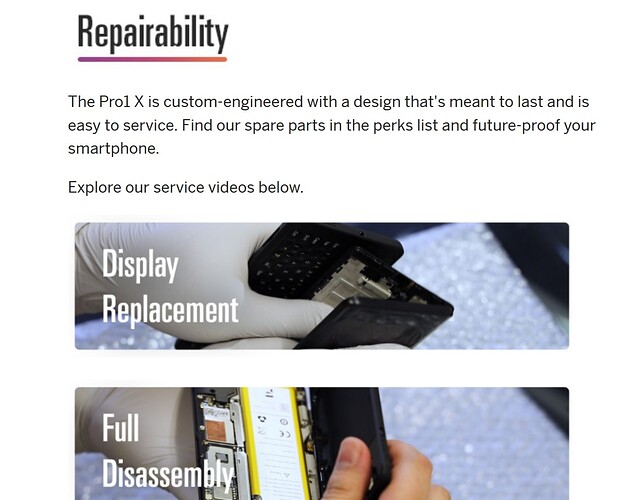 As a user of a non standard keyboard layout (Neo 2), I’m still waiting for one where I can customize the keyboard. Touchscreen keyboards are easier in that regard

Honestly, I don’t think you want to use such a keyboard for anything serious. Take a look at Planet Computers keyboards. Those are solid. Not these small (used to be rubber) ones with no travel, like on Casio/N900/etc. Also, an AMOLED screen is a notification LED. Very useful though.

I wouldn’t use any of those devices for “serious” work, but beats losing half the screen (in landscape) when sshing into a box on the go.

Those look very nice and would make at least touch typing possible. The Pro1 X has the added benefit of being usable as a normal smartphone though, those hinges on the Gemini don’t look like they support flipping the screen 360°.

Weird that the homepage and Pro1X page list different specs (especially CPU: 835 vs 662). Both are old processors too, which is a shame. Not something I would want to use day-to-day for the next 5+ years.

I’m not sure about you but, from my experience with Blackberry, touch-typing isn’t really much better on a small physical keyboard vs touchscreen. Either way I’m mostly judging by position, not feel, and I’ll immediately see if I’ve pressed the wrong key because the keyboard is already directly in front of me. I only find touch typing useful for PCs because the screen and keyboard aren’t close enough together.

I do sort of miss having easy access to some of the keys I use for Linux CLI operations when SSHing from my phone, which the Pro1 X keyboard has, but not enough to carry around a second phone just in case. It would make more sense for me to install a second software keyboard to do that, or just use Termux’s built-in keyboard add-on (which I already do).

I’m not sure about you but, from my experience with Blackberry, touch-typing isn’t really much better on a small physical keyboard vs touchscreen.

I was mostly thinking about being able to fit all my 10 fingers on the keyboard compared to just my thumbs. I can blindly type my non standard layout on any keyboard if there’s software support (included by default in most linux distributions) and I can use my whole hand, but my thumbs don’t know what keys to hit if they are not marked clearly.
It might not be the perfect (and most comfortable) option, but I for one am still using an old eeePC 901 to do some light terminal work from the couch, that keyboard probably has a similar size

I do sort of miss having easy access to some of the keys I use for Linux CLI operations when SSHing from my phone, which the Pro1 X keyboard has, but not enough to carry around a second phone just in case.

Agreed, I would never buy this as a secondary device either, too much e-waste. But I kinda like the fact that people are still trying to keep that form factor alive, even though it probably should have died for good more than a decade ago.

GPD MicroPC here, and I use it occasionally

I suppose the successor is the GPD Pocket 3. I got the 2, kind of a neat device.

As for the different SoCs in F(x)tec1, its because of the unavailability of the 835 that they went for second batch with 662. The device isn’t from this year and it takes time to develop.

If you’re cool with touch typing, but dislike the screen size of current smartphones for CLI, then foldable might be an option as well.

Yes it looks rerally good. I probably wouldn’t have bought it as it is Chinese crowd funding business and I try and not buy from China. Further In have just bought a Framework 13.5"

But it’s a nice piece of equipment